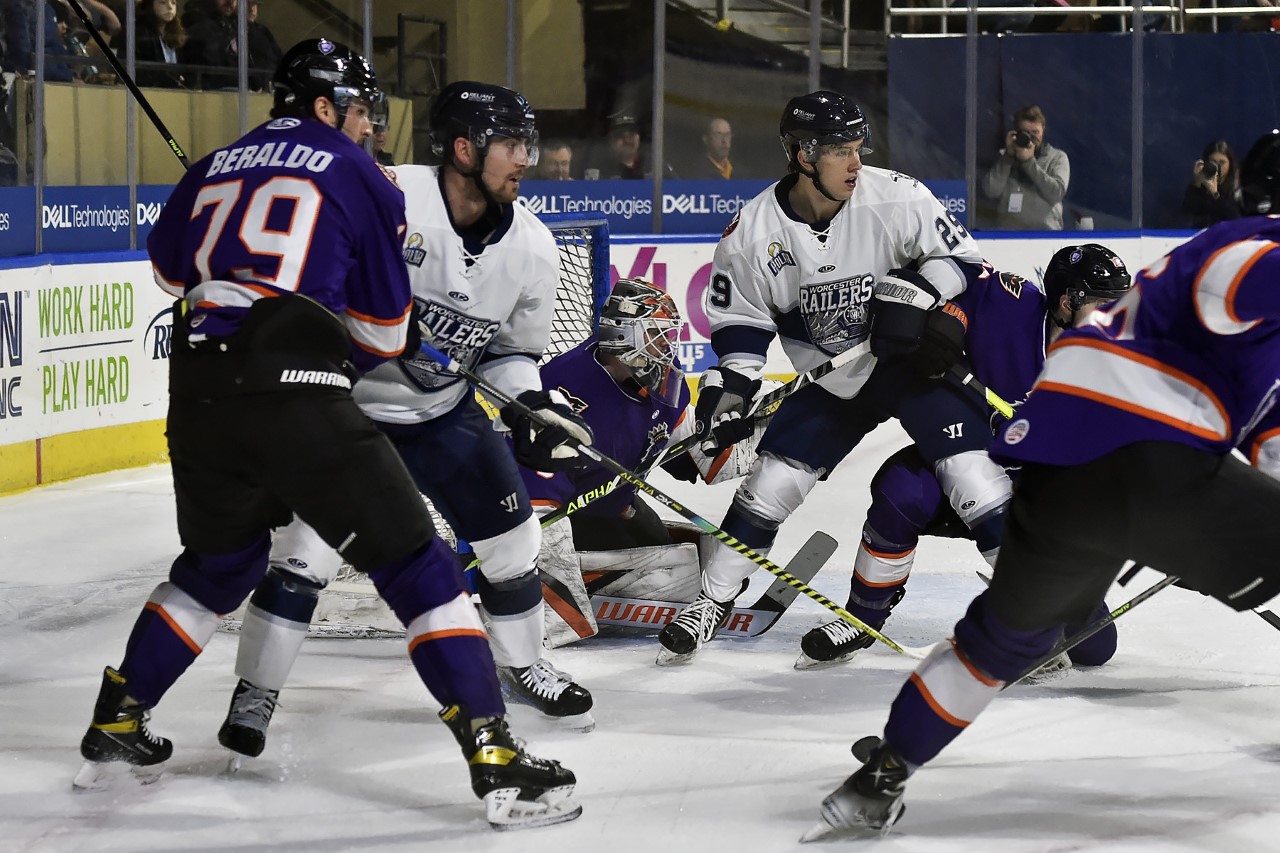 WORCESTER – This thing with the Reading Royals has entered the realm of science fiction.

With a two-goal lead, and less than two minutes away from snapping a seven-game losing streak against the Royals, the Railers gave up two goals in the final 1:41 of the third period then allowed ex-Railer Max Newton to score in overtime and were beaten, 5-4, on Friday night.

Two forwards from last season’s team, Newton and Grant Jozefek of Adirondack, have given this year’s Railers a very hard time so far. Newton’s overtime goal gave him a hat trick for the night. He has five goals in two games versus Worcester this season.

“Absolutely,” coach Jordan Smotherman said. “Any time you have a two-goal lead with a minute-forty to go and you lose the game, it’s gonna hurt.”

Jordan Timmons tied it with nine seconds left and Maier on the bench, then Newton won it with a great individual effort at 3:12 of overtime, scoring unassisted as he beat Henrik Tikkanen with a high shot to the far corner.

“We played a really good game for 58 minutes,” Smotherman said, “then we made soft mistakes at the end. We sat back, which we can’t do.”

The Railers’ other goals were scored by Jared Brandt at 8:50 of the second period and Billy Jerry at 9:38 of the second. It was Jerry’s first goal for the Railers and Bross’ first professional goal. Charlie Girard had the other Reading goal. It gave the Royals a 1-0 lead at 8:06 of the first period.

The Railers roster volatility continued as they lost Blade Jenkins, whose shootout goal provided the Worcester victory in Maine on Jan. 1. They re-signed local player Derek Osik, got Connor McCarthy back on loan from Bridgeport and Myles McGurty returned to action.

In all, nine players who have seen action for Worcester this season are in the AHL. That includes seven who were in the opening night lineup — Jacob Hayhurst, Steve Jandric, Jenkins, Collin Adams, Jimmy Lambert, Ryan MacKinnon, and goaltender Ken Appleby.

MAKING TRACKS – Attendance was a robust 5,108 with the Stanley Cup on display. … The Railers are in Reading Saturday night to start an important — it is too early to call anything make-or-break — road trip. After the Reading game Worcester heads north to Newfoundland for its final three regular-season games up there. The next game at the DCU Center is Jan. 20 vs. the Growlers. … Catching up from Worcester’s big game in Maine on New Year’s Day — Brent Beaudoin’s fighting major snapped his streak of 34 straight games without a penalty and more than doubled his career total. He had 4 PIM in his first 93 games with the Railers. Also, Jerry had one home game on his resume, Dec. 9, before suiting up for that one. … Neither here, nor there, but worth noting — the Railers are 12-10 in shootouts all time and the breakdown is that they are 11-22 on first tries, 2-22 on second tries, 8-21 on third tries and 11-29 when it goes beyond that.