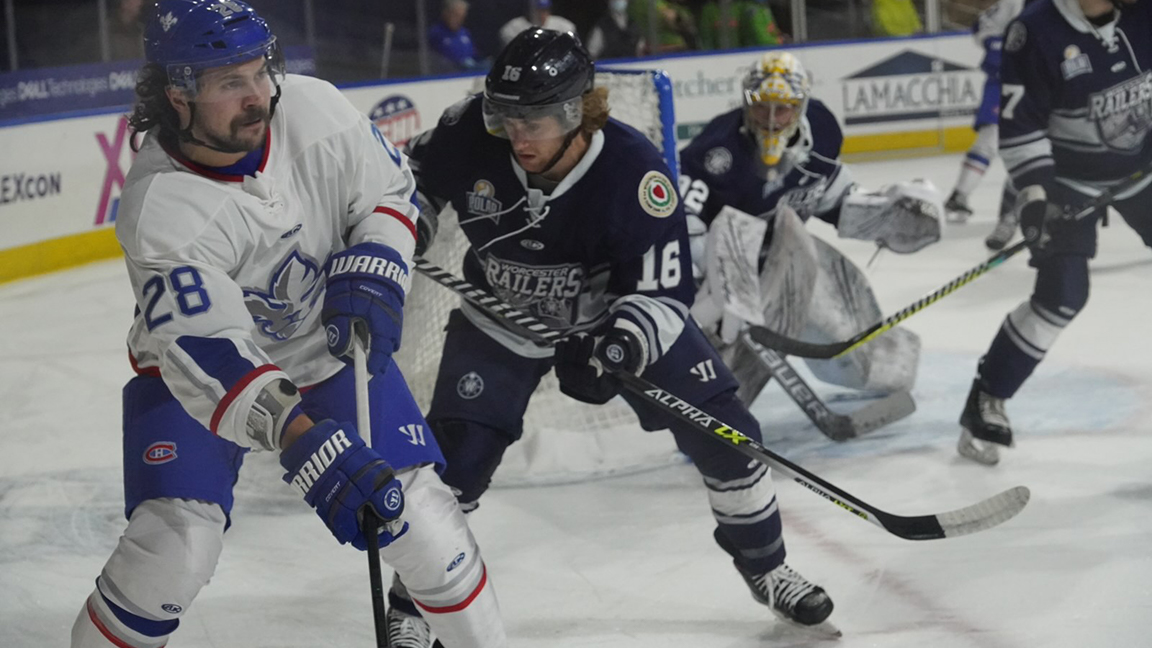 Meeting 2 of 10 vs. Trois-Rivières this season

Worcester, MA – The Worcester Railers HC (3-6-0-1, 7pts) lost the first out of two back-to-back home games against the Trois-Rivières Lions (4-6-0-0) by the score of 4-1 on Friday evening in front of 2,669 fans at the DCU Center. The Railers face off against the Trois-Rivières Lions on Saturday, November 20th at 7:05pm for Frontline Heroes Night presented by UMass Memorial Health.

Grant Jozefek (1-0-1) scored his first professional goal coming in the second frame but the Lions scored three goals in the same frame Mathieu Gagnon (1-0-1), Mathieu Brodeur (1-0-1), and Perrieck Dube (1-0-1). Charles David Beaudoin (1-0-1) notched a third period tally while Phillipe Derosiers made 28 saves for the win and Colten Ellis stopped 26 shots in the loss.

It was a quiet first, as neither team was able to find the back of the net. Railers goalie Colten Ellis made two big saves on Lions’ forward Olivier Archambault with less than a minute to go in the first period to keep the game tied at 0-0. Worcester outshot Trois-Rivières 13-9 after 20 minutes of play.

The Lions got on the board first in the second as Pierrick Dubé (1st) put home a rebound from Colten Ellis to cap off a three-on-one rush up ice. Worcester would tie it up five minutes later as Lions goaltender Phillippe Derosiers from outside of his crease passed to puck out to Railers Forward Grant Jozefek (1st) who put it in the empty net for his first professional goal. Trois-Rivières came back six minutes later and regained the lead off of a Mathieu Gagnon (1st) blast from the point to make it 2-1. 20 seconds later, Mathieu Brodeur (1st) sent a heavy shot off of the end boards that came out and deflected in off of the back of the leg of Ellis to make it a 3-1 game. The second period would end with a score of 3-1. Trois-Rivières outshot Worcester 13-7 in the period, and led shooting 22-20 after 40 minutes.

Trois-Rivières would add one more in the third period on the powerplay as Charles-David Beaudoin (1st) unleashed a shot from the point to give the game its final score of 4-1.

Three Stars: 3rd star: Grant Jozefek (1-0-1, 2 shots), 2nd star: Phillippe Derosiers (28 saves, 1GA, .966 SV%), 1st star: Olivier Archambault (0-2-2, +1, 5 shots)… Final shots were 30-29 in favor of Trois-Rivières… Phillippe Desrosiers (3-2-0) made 28 saves on 29 shots for Trois-Rivières… Colten Ellis (1-2-0) made 26 saves on 30 shots for Worcester while Ken Appleby served as the backup… Worcester went 0-for-3 on the power play while Trois-Rivières went 1-for-1… Liam Coughlin (DNP), Ross Olsson (DNP), Anthony Repaci (DNP), Brent Boudoin (DNP) did not dress for Worcester… Mike Cornell is up with the Bridgeport Islanders… Nick Albano is up with the Springfield Thunderbirds… Grant Jozefek scored his first professional goal… Jordan Lavallee-Smotherman and Nic Pierog led the Railers with 4 shots each… Worcester has 62 games left on the regular season 32 of which are at the DCU Center… The Railers are now 1-1-0-0 all-time vs. the Lions and 0-1-0-0 in Worcester.