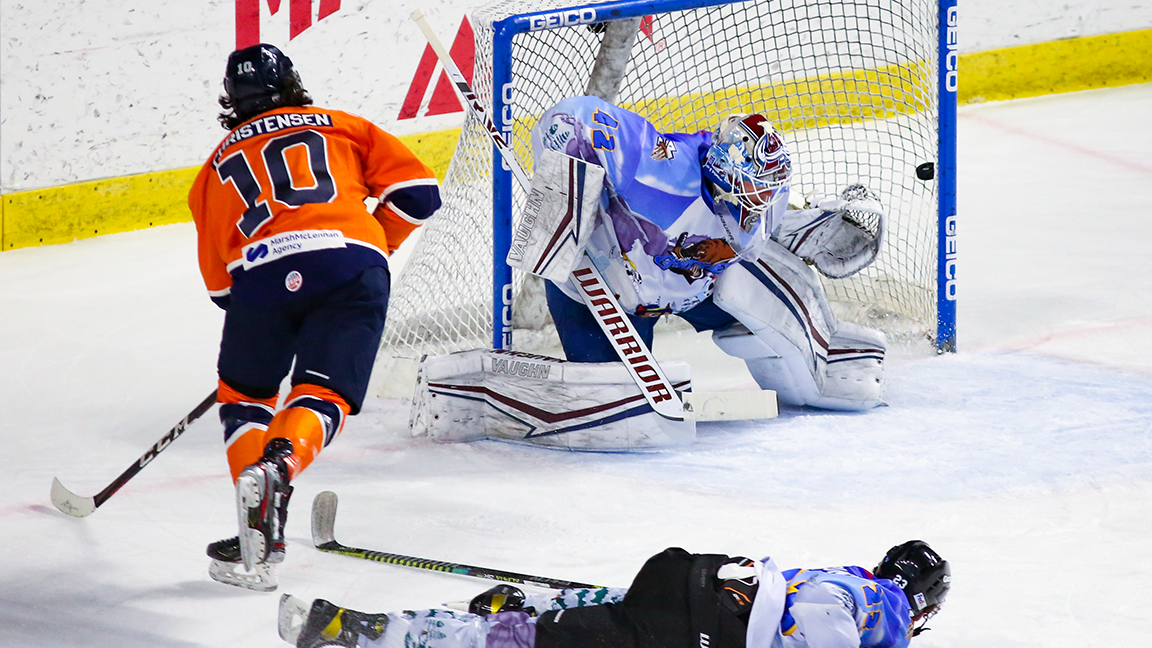 Meeting 3 of 3 vs. Utah this season

The Railers held the lead three separate times against the Grizzlies throughout the afternoon. Jordan Lavallee-Smotherman (1-0-1) was the lone skater in the first period to find the back of the net, giving Worcester a 1-0 lead heading into the first intermission. Utah came out and tied the game quickly in the second, but the Railers were able to respond thanks to goals from Liam Coughlin (1-1-2) and Blake Christensen (1-1-2), giving the team a 3-1 lead midway through the second. Utah was able to record a pair of their own, and tied the game 3-3 going into the second break. Jacob Hayhurst (1-1-2) quickly gave Worcester back the lead, but it was two late goals from Utah which proved to be the difference, as the game would end in a 5-4 Grizzlies victory.

The captain, Jordan Lavallee-Smotherman (22nd) opened up scoring with his team leading 22nd goal of the season. Lavallee-Smotherman received a feed from Liam Coughlin and one-timed it past Grizzlies goalie Peyton Jones to give Worcester the 1-0 lead 10:35 into the first. Jacob Hayhurst on the Grizzlies powerplay thought he had his second shorthanded goal in as many games, but a goalie interference call on the rush ended up calling the goal back, keeping the game at a 1-0 score. The Railers ran the pace of play in the period, outshooting Utah 13-6.

Utah responded quickly in the second period as Ben Tardif (9th) buried a quick shot from the left side just 1:55 into the frame to tie the game. Worcester came back five minutes later and retook the lead thanks to Liam Coughlin (7th) who deflected a wrister from Matt Sredl on the power play to make it a 2-1 game. Worcester extended their lead to 3-1 as Blake Christensen (10th) flew down the left side and elevated a puck over the shoulder of Jones just in front of the net with 7:47 left in the second. The first-place team in the mountain division wouldn’t stand down, as the Grizzlies scored two goals just 1:12 apart from one another to tie the game late in the period. First it was Quinn Ryan (12th) with his second of the three-game set, as he deflected a wrist shot in front from Miles Gendron along the far side. Then, Zac Robbins (8th) slapped home a messy rebound out in front to tie the game 3-3 with just 3:09 remaining in the second. Neither team scored during the rest of the frame, as the teams would head into the locker rooms deadlocked 3-3. Shots favored Worcester 16-12 for the period, and 29-18 through 40.

It didn’t take Worcester long to take the lead for the third time of the afternoon in the third period. Jacob Hayhurst (10th) was set up beautifully by Ross Olsson 1:27 into the  period to make it 4-3 Railers. Utah stormed back to tie the game for the third time as Luka Burzan (6th) found the puck backdoor on the rebound and potted it to tie the game 4-4. The Grizzlies would take their first lead of the afternoon with 3:05 to go in regulation. Miles Gendron (1st) received a drop pass from Mason Mannek and rifled one high glove side on Ellis to put Utah ahead 5-4. Despite a flurry of opportunities within the final minute with Ellis pulled, the Railers couldn’t get past Jones and the Grizzlies’ defense and fell by a final score of 5-4. Shots in the period favored Worcester 18-15, for a game total of 47-33 in favor of the Railers.