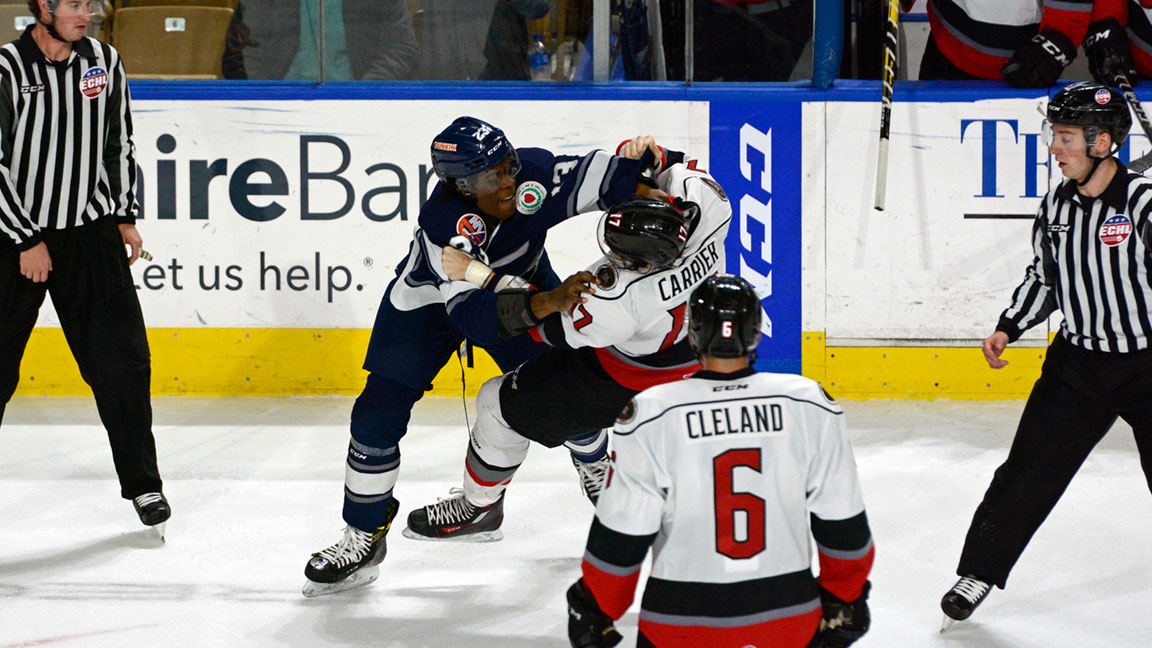 Meeting 5 of 11 vs. Adirondack this season

70 total penalty minutes handed out between the two clubs

WORCESTER, MA – The Worcester Railers HC(12-13-3-1, 28pts) fought back twice but eventually fell 5-3 to the visiting Adirondack Thunder (14-9-2-2, 32pts) in front of 3,057 fansat the DCU Center on Friday evening. The Railers host the Reading Royals on a BIG GAME SATURDAY on Non-Profit Awareness Night with a Game of Thrones theme with a 7pm puck drop to close out the pre-holiday break schedule.

Tyler Barnes, Matt Schmalz, and Ivan Kosorenkov all scored for Worcester while Mitch Gillam made 32 saves in net in the loss. Michael Sdao broke a 3-3 tie late in the third period for the eventual game winner for the Thunder while Alex Sakellaropoulos made 29 saves in net in the win.  The game featured 70 total penalty minutes as the Railers fell to 7-5-3-1 on home ice this season.

A feisty first period saw a lot of booming checks and each team finding the back of the cage once.  Jacob Reichart (2nd) had a rebound go off his chest from on top of the crease that ended up behind Mitch Gillam at 13:35.  Woody Hudson picked up his second fighting major of the season with a good scrap with Alexandre Carrier at 17:37 as the physical play continued. Worcester would tie the score at 19:37 as Tyler Barnes (8th) batted home a loose rebound from on top of the crease to close out the period assisted by Josh Holmstrom and Nick Sorkin.

A wild second period saw four total goals and a line brawl at 15:52 that involved nearly every player on the ice except the goaltenders.  Dylan Walchuk (1st) and Matias Cleland (1) scored within a five-minute spell early in the second period to put the Thunder ahead 3-1 at 8:30. Matt Schmalz (3rd) scored his first as a member of the Railers with a nice one-timer at 10:03 followed by Ivan Kosorenkov just 34 seconds later to tie the score at 3-3. A wild brawl broke out at 15:52 that saw 36 penalty minutes handed out which included a fighting major to Yanick Turcotte.   Just over two minutes later Alex Adams picked up his first fight as a Railer as he dropped the mitts with Matt Tessier at 18:18. Shots were 28-22 in favor of Worcester through 40 minutes of play in a 3-3 game.

Michael Sdao (2nd) broke a 3-3 tie with a shot from 43 feet through a screen at 16:54 of the third period for the eventual game winner and Peter MacArthur (7th) added an empty netter at 19:07 to put the game away.  Worcester was outshot 15-4 in the third period to drop the game 5-3 on home ice.

Notes: Three Stars: 3rd star: Jacob Reichert (Goal) 2nd star: Matt Schmalz (1-1-2) 1st star: Michael Sdao (GWG, Fight) …. final shots were 37-32 in favor of Adirondack…. Alex Sakellaropoulos (7-3-3) made 29 saves on 32 shots for Adirondack…. Mitch Gillam (7-8-0) made 32 saves on 36 shots for Worcester…. while Ryan Hubbard served as the emergency backup…. Worcester went 0-for-4 on the power play while Adirondack went 0-for-4…. Tommy Kelley (inj), Kyle McKenzie (inj), David Quenneville (inj), Alex Vanier (inj), Tommy Kelley (inj), Austin Block, and Malcolm Gould (inj) did not dress for Worcester…. Jeff Kubiak and Ryan Hitchcock are currently on recall with the Bridgeport Sound Tigers… Nick Sorkin now has eight points (5-308) in his last seven games with an assist…..before the game the members of the Worcester Fire Department collected donations for the Ava Roy Fund…..Boston Bruins great Rick Middleton signed autographs before the game….the game featured a season high 70 penalty minutes which included three sets of fighting majors…..Ryan MacKinnon now has a two game point streak (1-1-2) with an assist….Josh Holmstrom also added an assist for Worcester…Matty Gaudreau and Yanick Turcotte both left the game due to injuries and did not return.

What’s on tap?….Railers home before holidays!

On Saturday, Dec 22 the Railers host the Reading Royals at 7pm on Non-Profit Awareness Night with a Game of Thrones theme on a BIG GAME SATURDAY.  The Railers HC Foundation is donating a total of $40,000 to several local non-profit organizations. Every Saturday night home game is SATURDAY NIGHT SIGNINGSpresented by MidState Auto Group with a Railers player signing autographs during the first intermission.

Worcester Railers Home for the Holidays!
Scroll to top