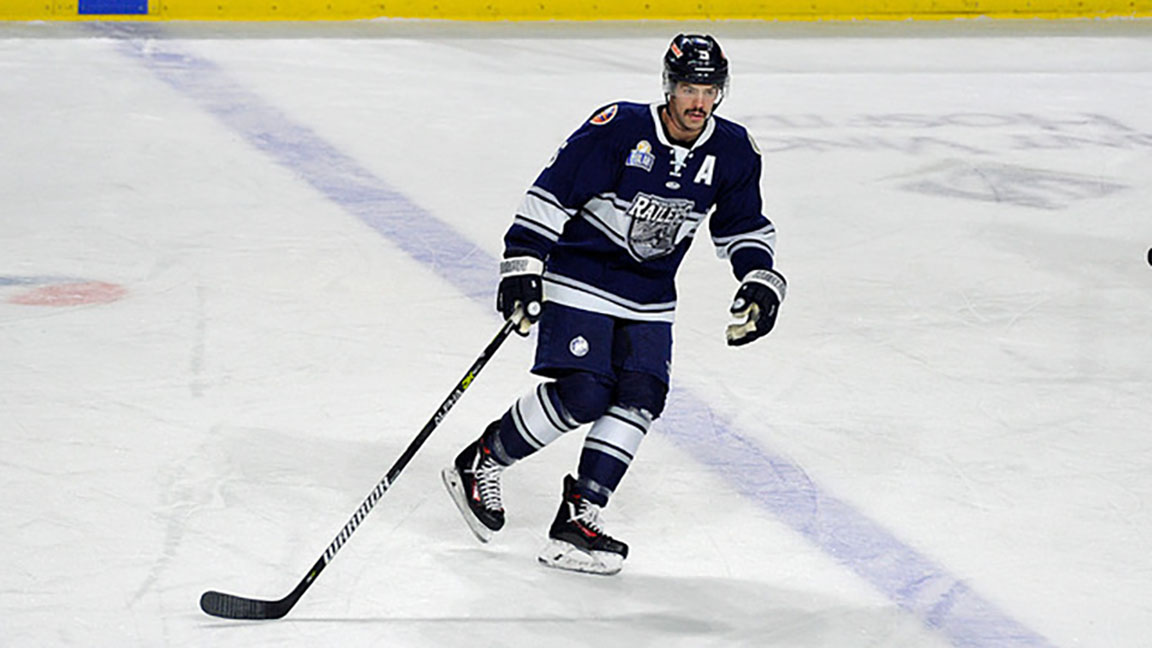 Meeting 1 of 13 vs. Reading this season

Worcester, MA– The Worcester Railers HC (4-7-0-0, 8pts) dropped their third straight home game in a  6-4 loss to the first place Reading Royals (8-4-2-0, 16pts)on Wednesday morning in front of 6,718 at the DCU Center on the annual School Day Game. The Railers are back at home Thursday night at 7pm vs. the Brampton Beast for College Night.

Ryan Mackinnon (1-2-3), Kyle McKenzie, Matt Schmalz, and Jordan Samuels-Thomas (1-1-2) all scored goals for Worcester while Evan Buitenhuis made 27 saves in net for the loss. Ralph Cuddemi and Hayden Hodgson each scored two goals for the Royals while Kirill Ustimenko made 36 saves to pick up his fourth win of the season. Barry Almeida added three assists and Cody Payne extended his point streak to three games as Worcester fell to 2-3-0-0 on home ice this season.

Reading would net the first goal of the game off a funky deflection in front from Hayden Hodgson (4th) at 6:35 of the first period. The Railers capitalized on a five on three advantage at 16:06 thanks to a heavy blast off the stick of Ryan Mackinnon (1st) in the high slot tying the game at 1-1. The Royals regained the lead with a power play score of their own thanks Ralph Cuddemi (9th) who snuck one by Evan Buitenhuis from the right circle. Despite outshooting the Railers 16-8 in the first 20 minutes, Reading led 2-1.

Frank Dichiara (7th) gave Reading a 3-1 lead with a laser of a wrist shot from the high slot beating Evan Buitenhuis low side just 1:22 into the second period. Just 3:34 later Worcester would decrease the deficit back to one as Matt Schmalz (3rd) scored for his second time in just as many games.It was Hayden Hodgson (5th) who netted his second score of the game just 42 seconds after the Schmalz tally making the Royals lead 4-2. A scary moment midway through the second period after Hayden Hodgson and Connor Doherty collided in the corner, Hodgson was slow to his feet and stretched off by team doctors and did not return. Kyle McKenzie (1st) in his 100thpro game made it 4-3 with a blast from the top of the point at 9:12 after a clean face off win from Cody Payne. Reading took a 4-3 lead into the locker room after 40 minutes of play but with Worcester holding a 28-21 shot advantage.

Midway through the final period, Reading would regain a two-goal lead as Trevor Yates (3rd) was able to sneak one past Evan Buitenhuis in the high slot at 10:35. With Buitenhuis out of the net, Worcester would capitalize when Jordan Samuels-Thomas (4th) sent a laser beam over the left shoulder of Kirill Ustimenko making it a 5-4 game with just 3:02 to play. Despite some quality chances with the goaltender pulled, the Railers surrendered an empty net score with just 33 seconds left thanks to Ralph Cuddemi (10th) as Reading took a way the 6-4 road victory.

Notes: Three Stars: 3rd star…. Frank DiChiara (1-1-2) 2nd star: Ryan MacKinnon (1-2-3) 1st star: Hayden Hodgson (2-0-2) final shots were 40-33 in favor of Worcester…. Kirill Ustimenko (4-1-2) made 36 saves on 40 shots for Reading.… Evan Buitenhuis (1-4-0) made 27 saves on 32 shots for Worcester while Linus Soderstrom served as the backup…. Worcester went 1-for-5 on the power play while Reading went 1-for-3…. Cody Payne and Jordan Samuels-Thomas extended their point streaks to three games…. Barry Almeida registered three assists for his fifth multi-point game of the year…. Kyle Thomas led all skaters with seven shots… 6,718 were in attendance for the annual School Day Game which was the largest attendance for a Worcester Railers School Day Game…. Tanner Pond (inj), Shane Walsh (inj), Jack Stander, Jake Bolton, and Chris Rygus did not dress for Worcester…. Mike Cornell, Nic Pierog, and Jakub Skarek are currently on recall with the Bridgeport Sound Tigers…. Ryan MacKinnon was returned from the Bridgeport Sound Tigers before the game and recorded three points Worcester is now 11-9-1-0 all-time vs. the Royals and 7-2-1-0 at the DCU Center.

On Thursday, Nov 14 the Railers host the Brampton Beast at 7pm on College Night!  All college students can score $10 tickets at the Box Office with a college ID.  One lucky fan will take home $500 cash during the largest t-shirt toss of the season! (over 200 t-shirts will be tossed into the crowd with 1 lucky t-shirt containing $500!). Thursday will mark a 2-3-4 Weekday as fans can enjoy $2 popcorn, $3 soda, and $4 bud lights in the Bud Light Lounge.

Railers up ended 6-2 vs. the Adirondack Thunder on Marvel Night