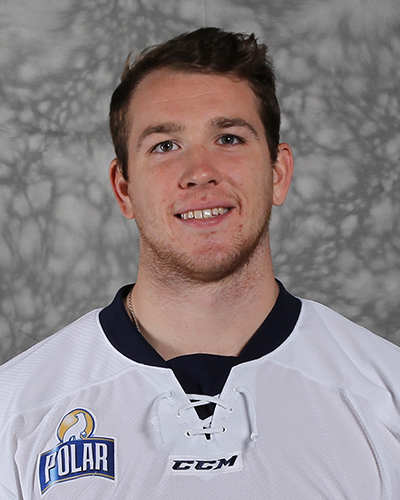 game or two of Fortnite. He’s pretty good at all three too. He has good size at 6’2 and 195lbs, and he’s the only Worcester Railers player that can play a game at the DCU Center, with his parents in attendance, and be sharing a home cooked meal with them at their dinner table in under 30 minutes after the final whistle.

He was born in Hartford, Connecticut and at nine months old moved to Holden, Massachusetts, a small town outside of Worcester with a population of 18,799 and a really nice public pool. The past 24 years of Connor’s life, for the most part, have been spent in Holden. Life is cyclical, so he ended up returning to Connecticut for college after originally starting at UMass Amherst. He attended Sacred Heart University, which is in Fairfield, about an hour from Hartford, for three years. But it’s his roots in Holden that have gotten him to where he is today—a professional hockey player. He now skates on the same ice he grew up watching the Ice Cats and Sharks players hone their skills on. His parents took him to many games from an early age, unaware they would come back years later to watch their son take the same ice, donning a jersey with his last name on it, proudly representing his city.

Connor describes Holden as a place that grew his competitive edge and love for hockey.

“Playing with my brother and Dad, they taught me all about it,” he said. “We’d play a lot of street hockey in the cul-de-sac with the neighbors, and they were all older than me, so, it definitely led to me being a little more aggressive and competitive than I think I would have been had they not been around at that time.”

His father played a little hockey growing up, mostly on the pond, and this is where Connor got his first introduction to the sport.

“Even my mom and sister would play on the pond,” he said. “We could just walk through the woods to get there…so we’d have street hockey in the summertime and when the ponds froze we’d always go down there…parents, kids, everyone.”

As most successful athletes do, Connor played a variety of sports growing up, including soccer, lacrosse and baseball. It wasn’t until his junior year at Wachusett Regional High School that he was faced with the task of having to choose one over the other. It came down to soccer and hockey, and well, I trust you can figure out which one he chose for yourself. He joined the Boston Bruins junior team and continued to play lacrosse in the springtime. From the junior Bruins, he would be recruited to play college hockey, an experience that, at such a young age, can feel daunting and overwhelming.

“At that point you’re so young, 17, 18, 19, you don’t really know exactly what you want to do for school,” he recalled. “Obviously, I knew I wanted to play hockey, but I think it can be overwhelming when you’re playing all these showcases, you want to be noticed by the coaches, and maybe sometimes you see other guys getting talked to, you’re not sure what to expect…but some games you’re not even thinking about it, you just go out there and play and hope for the best at the end of the season.”

After completing a year at UMass Amherst, Connor finally settled on Sacred Heart University as his college of choice, a school where he felt comfortable and would still allow him to continue to play hockey. While at Sacred Heart, he studied Finance and proved to be a valuable asset to the hockey program, serving as alternate captain his senior year. Sacred Heart might not be known as the powerhouse hockey school that other schools are known to be, but sometimes not being the top dog can be beneficial, especially on a personal level. When respect isn’t automatically given to you, you must earn it, and while earning respect, you get to make a name for yourself. In sports, making a name for yourself is a unique opportunity.  And over the course of his three years at Sacred Heart, Connor thinks he and his teammates made a pretty good name for themselves. 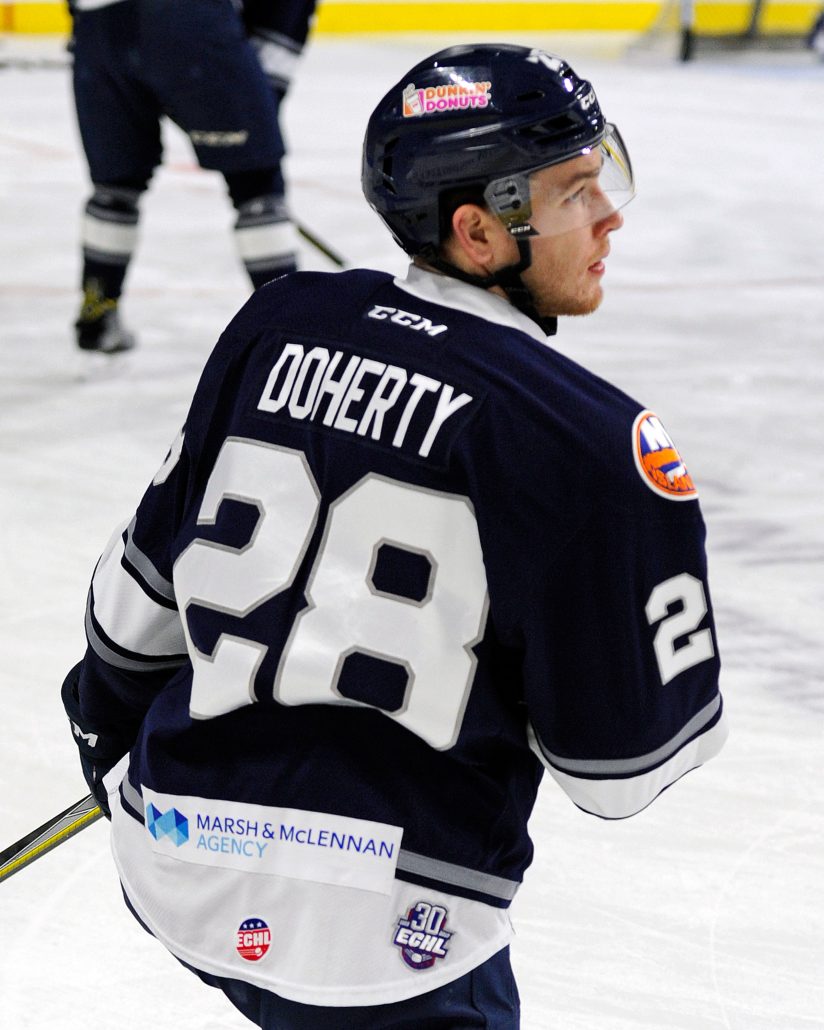 “We’re not really one of the biggest names,” said Doherty. “But throughout my three years there, we had a couple big wins over some Hockey East teams.”

One thing I noticed when speaking with Connor is that he liked to refer to his team as “underdogs”. The underdog is a common trope in sports. People like to root for a good underdog, it just feels right. The trope, however, can be overused and might now resonate more as a marketing ploy used by unsuccessful teams in an effort to get their attendance numbers up, but there are real underdogs, and they deserve to be respected.

And Connor Doherty is an underdog.

He received an invite to the Railers training camp from head coach and general manager Jamie Russell. No contract, no promises, just an invite. If he performed well and impressed, he might be offered a contract. Often, the players invited to training camp on try-out don’t end up receiving an offer. But by the end of the Railers first ever training camp, Connor Doherty from Holden, MA, received an offer to sign an ECHL contract from Jamie Russell. But his work wasn’t done. Underdogs must consistently prove themselves. There’s no room for slack. They can’t take a rep off during practice or a play off during a game. They constantly need to prove to everyone that they deserve to be around. The other thing underdogs can benefit from is luck. I’m specifically speaking of luck in regard to staying healthy. Injuries do not discriminate and they usually come at the most inopportune times. In the case of Connor Doherty, he got one right after making the team; you couldn’t draw up a worse time to sustain an injury, never mind a prolonged one like the groin. But it happened. He had two choices: 1. Throw in the towel and let his dream of playing professional hockey escape or 2. Fight, like an underdog does, to get back to being healthy. He chose the latter. Given the opportunity, his mind was set on playing professional hockey.

“I’d always talk to my coaches, anytime we had a meeting, about the opportunity of playing [pro],” he said. “At the same time, my senior year, I was still putting out resumes, going to job interviews all summer long, I wasn’t sure if it was actually going to work out…I lucked out, Jamie Russell offered me a try-out…My goal was to be able to play this year. I worked hard all summer for it…In training camp I was able to do what I wanted to do. I ended up making the team, which was a very big relief. For me, it wasn’t really done there yet. I had to make sure that I solidified a spot on the team. A guy coming in as a try-out, there’s going to be guys ahead of you, and I think I kind of just needed to prove that I could be a guy that could be in the line-up every day and have my role on the team.”

He said he owed it to himself—to give playing professional hockey a chance. So, he did. He battled through his groin injury and went on to appear in 40 games for the Railers during the regular season and put together a goal and four assists for five points. He also played in five playoff games and added another assist. He dropped his gloves a few times too, and didn’t look too bad doing so. By the end, of the season, he manifested a reputation as a hard-nosed player, and the running joke in the Railers locker-room was that Connor Doherty was the Railers new tough guy. And while it might have just been joking, since the Railers house one of the toughest skaters in all of hockey, Yanick Turcotte, there’s no denying that Connor Doherty is in fact tough, and will do whatever it takes to get the job done. If the finance classes Connor took at Sacred Heart taught him anything, it’s that when a once in a lifetime opportunity comes around, you go all in on it.

Connor went all in on his opportunity to play pro hockey. For that, he was rewarded with ample ice-time during his rookie season, five playoff appearances, and an offer to do it all over again next season. Not bad for a kid from Holden.