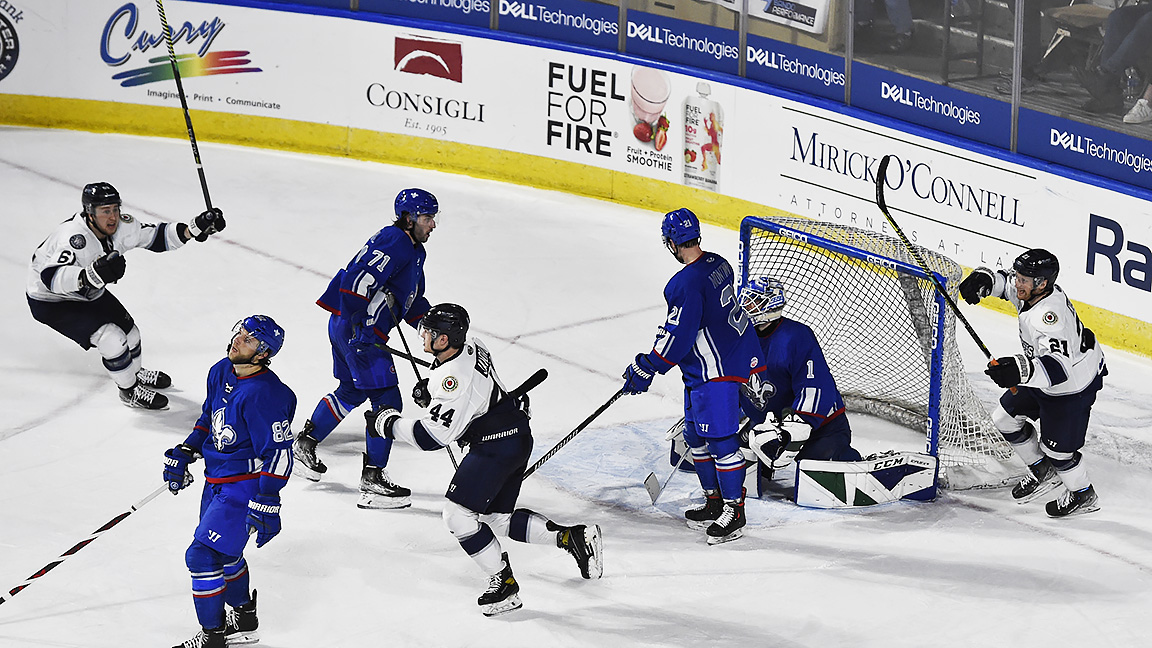 Meeting 7 of 10 vs. Trois-Rivières this season

Worcester came out flying through most of the first period, as they outshot the Lions 17-12 through the frame. Trois-Rivières got ahead late in the first however and held on to take a 1-0 lead heading into the first intermission. Trois-Rivières got right back on the board early in the second as the took the 2-0 lead shorthanded just :42 into the second. A late third period surge from the Railers tied the game, as both Max Newton (1-1-2) and Austin Osmanski (1-0-1) each scored with under six minutes to go in the game to tie it up heading into OT. It would be Steve Jandric (1-0-1) who scored just 1:29 into OT to send everyone home from the DCU center happy on Saturday night.

It was all Worcester early in the first. Through the first three minutes of play, the Railers were outshooting Trois-Rivières 4-0, testing Lions goalie and Canucks draft pick Arturs Silovs early. Play evened out midway through the period, as the teams would split the next ten shots even, 5-5. It would be Trois-Rivières who would score the game’s first goal with 2:01 left in the period, Lions defenseman Mathieu Gagnon (5th) wristed a shot from the right point which bounded through traffic and beat a screened Appleby to give Trois-Rivières a 1-0 lead. Worcester brought good energy and pace throughout the opening frame, as they outshot the Lions 17-12, but couldn’t beat Silovs through 20.

Trois-Rivières, despite being shorthanded to start the second period, found the back of the net :42 into the period for their second goal of the game. It was Tim Vanstone (4th) who broke down the right side on an odd man rush and sniped it bar down past the left shoulder of Ken Appleby to make it 2-0 Trois-Rivières. Trois-Rivières picked up the intensity in the second, as they would go on to outshoot Worcester in the frame 8-5. Worcester still held the edge in shots through two at 22-20. Both teams would be dry for the rest of the frame however, as the period came to a close with Trois-Rivières ahead 2-0.

In the third, Worcester’s greatest opportunity to get back into the game came midway through the period. First, Julien Nantel committed a delay of game penalty by flipping the puck above the glass and out of play. Just four seconds into the powerplay, Josh Brook committed a high sticking minor to give Worcester a five-on-three power play for 1:56. After a lot of time spent passing in the attacking end, the Railers failed to get one past Silovs, as they were now 0-for-6 on the power play. This continued a dry stretch of 0-34 through the last ten games on the power play for the Railers. Late in the period, the Railers came to life for the first time in two games against Trois-Rivières. First it was Max Newton (3rd) who cleaned up a loose puck out in front to make it a 2-1 game with 5:37 left in the game. Then, defenseman Austin Osmanski (5th) sent a wrist shot through traffic to beat Silovs left side and tie the game at 2-2 with 4:35 left in regulation. Worcester would kill off a late tripping minor committed by Liam Coughlin to end regulation, giving each team a point in the standings on the night. Worcester outshot TR 14-2 in the third, and 36-22 through regulation.

The Merrimack product, Steven Jandric (3rd) received a feed from former Merrimack teammate Max Newton out in front, and put on a spin move to sneak a puck underneath the pads of Arturs Silovs to deliver the 3-2 overtime victory for the Railers. Worcester outshot Trois-Rivières 2-0 in the overtime period, and outshot them 38-22 on the game.