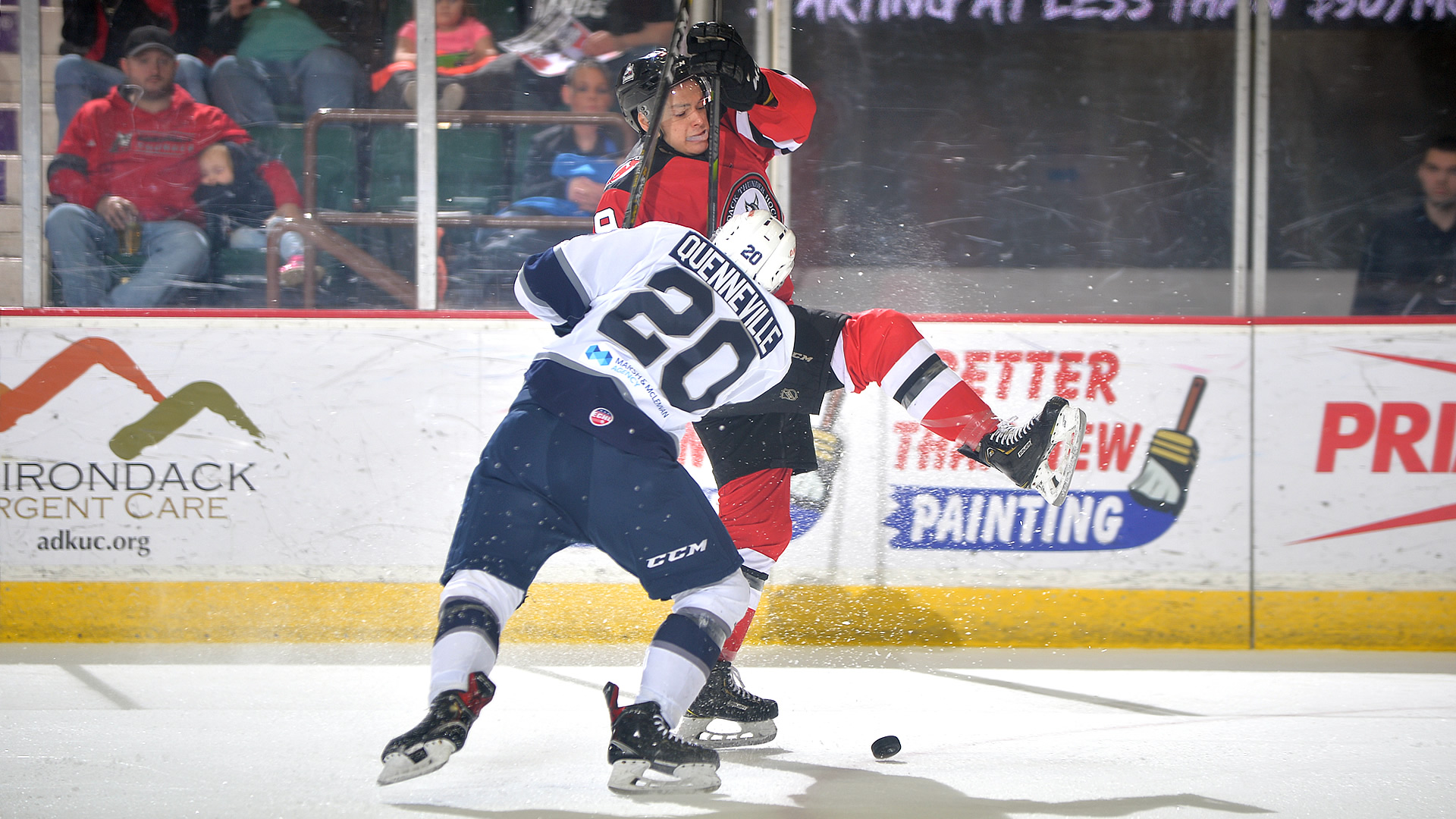 Worcester Railers HC at Adirondack Thunder
April 7, 2019
DCU Center
Meeting 11 of 11 vs. Adirondack this season
Railers went 7-4-0-0 vs. the Thunder this season

Glens Falls, NY– The Worcester Railers HC (32-29-7-4, 75pts) closed out the 2018-19 regular season schedule with a come-from-behind 5-4 overtime victory over the host Adirondack Thunder (37-26-6-3, 83pts) in front of 3,515 fans at the Cool Insuring Arena on Sunday afternoon. The Railers 2019-20 regular season schedule will be announced later this spring as the club will prepare for their third season of ECHL play at the DCU Center beginning in October 2019.

Ivan Chuckarov scored his first two professional goals while Tommy Kelley and Ryan Hitchcock also found the back of the net for Worcester as Mitch Gillam made 32 saves on 36 shots in net for his 21st win of the season. Alex Sakellaropoulos made 19 saves in net for the Thunder while John Edwardh led the way offensively for Adirondack with a pair of goals. Matty Gaudreau netted the game winner at 2:08 of sudden overtime in a back-and-forth game thought saw several lead changes. Nick Sorkin added two assists as the Railers finished with a 15-17-1-3 record away from the DCU Center.

Adirondack grabbed a 1-0 lead in the first period on the power play as John Edwardh (26th) ripped a shot through a screen from the left circle that went top shelf at 10:29. The Thunder outshot Worcester 13-7 through 20 minutes as the Railers trailed 1-0 after the first period.

Ivan Chukarov (1st and 2nd) scored his first two professional goals in the second period and Tommy Kelley (7th) also scored as Worcester outscored the Thunder 3-1 in the middle frame. John Edwardh (27th) scored a shorthanded goal for Adirondack as the Railers took a 3-2 lead into the second intermission despite getting outshot 26-17 through 40 minutes of play.

James Henry (15th) and Matt Salhany (15th) got the Thunder back ahead 4-3 with two quick strikes in the first five minutes of the third period. The Railers would tie the score at 18:40 of the third period as Ryan Hitchcock (17th) fired a rebound into the cage to force overtime.

A wild back-and-forth overtime frame saw both teams have several great chances but Matty Gaudreau (12th) carried the puck behind the back of the net and maneuvered his way in front before snapping a quick shot just past Sakellaropoulos’ blocker to give the Railers a 5-4 win at 2:08 of the overtime period.

What’s on tap – THANK YOU FANS!
The Worcester Railers would like to thank the 152,370 fans that attended a Railers game at the DCU Center this season! We look forward on seeing our members at Railers sponsored events throughout the offseason. 2019-20 season ticket packages are on sale now for the Railers third season of ECHL action which will begin in October 2019. Visit www.RailersHC.com or call 508-365-1750 for more information.

THANK YOU FANS!
Scroll to top