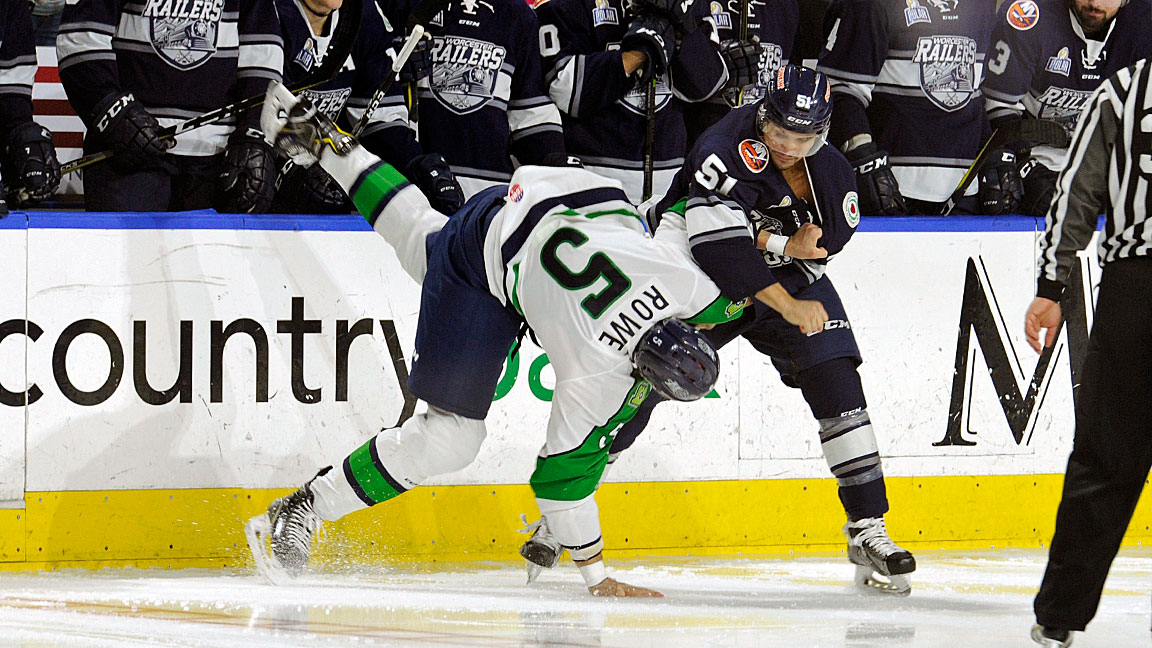 Meeting 9 of 14 vs. Maine this season

Nick Sorkin ruined Hannu Toivonen’s shutout bid with 1:36 left in the third period as Maine got goals from Morgan Adams-Moisan, Greg Chase, and Mike McNicholas to grab their 6th straight victory.  Evan Buitenhuis made 22 saves in net in the loss for Worcester as the Railers fell back to under .500.

Fireworks right off the opening faceoff between Yannick Turcotte and Louie Rowe set the tone for Saturday night hockey between the two North Division rivals as Turcotte scored the early takedown.  Morgan Adams-Moisan (7th) deflected a shot from the point into the net at 12:43 and Greg Chase (5th) raced to the net and deflected a centering feed past Evan Buitenhuis at 16:24 to put the Railers down 2-0.

Mike McNicholas (8th) scored on the power play at 16:00 of the second period after he found a loose puck in the left slot to put the Mariners ahead 3-0.  Worcester outshot Maine 16-10 in the middle frame and held a 26-19 advantage through 40 minutes of play but trailed by three goals into the second intermission.

Worcester would press a bit in the third period and outshot Maine 16-6 in the process.  Nick Sorkin (7th) would finally get the Railers on the board at 18:24 after Woody Hudson won the puck behind the net and zipped it in front to Sorkin.  It was too little too late as Maine held on for the 3-1 road victory.

Notes: Three Stars: 3rd star: Scott Savage (0-1-1) 2nd star: Greg Chase (1-0-1) 1st star: Hannu Toivonen (41 saves, Win) …. final shots were 42-25 in favor of Worcester…. Hannu Toivonen (1-0-0) made 41 saves on 42 shots for Maine…. Evan Buitenhuis (5-6-3) made 22 saves on 25 shots for Worcester…. while Mitch Gillam served as the backup…. Worcester went 0-for-6 on the power play while Maine went 1-for-5…. Kyle McKenzie (inj), David Quenneville (inj), Austin Block, Alex Adams, and Malcolm Gould (inj) did not dress for Worcester…. Jeff Kubiak, Ryan Hitchcock, and Matty Gaudreau are currently on recall with the Bridgeport Sound Tigers… Ryan MacKinnon now has a five-game point streak (1-5-6) with an assist… Toivonen is the only goaltender to play vs. the IceCats, Sharks, and now the Railers (thanks Darryl Hunt)…Woody Hudson now has a two game point streak (1-1-2) and fired a game high five shots on goal.

On Friday, Jan 4 the Railers travel to Charleston, SC for a 7pm battle vs. the Stingrays. Coverage begins at 6:35pm on 98.9 Nash ICON.

The Worcester Railers and Worcester Jr. Railers to donate $16,500 to the Ava...