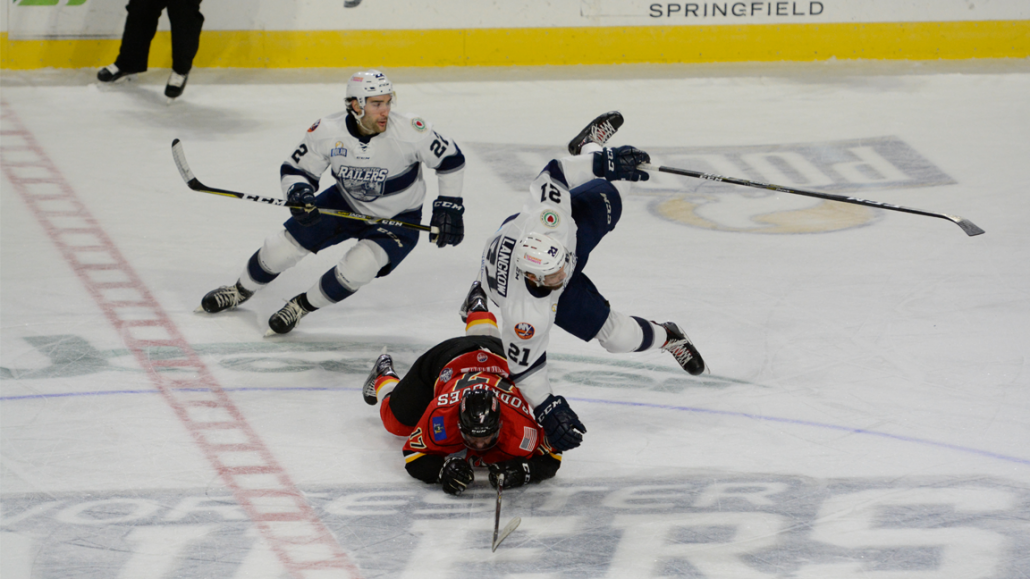 Meeting 5 of 12 vs. Adirondack this season

Thunder goaltender Nick Riopel made 44 saves in net as Adirondack scored three third period goals for the victory.  A slew of fights broke out in the final two minutes as the Railers were whistled for 43 penalty minutes in the Friday night affair that saw Mitch Gillam make 26 saves in goal.

There was no score in the first period as Worcester outshot Adirondack 18-9 through 20 minutes of play. Each team went 0-1 on the power play in the opening frame.

The Thunder scored three goals in the third period to pull away for the 3-0 victory.  Pierre-Luc Mercier (8th) made it 1-0 on the power play just 55 seconds into the period for the eventual game winner.  Connor Riley (3rd) made it 2-0 at 6:33 followed by Tim Harrison (4th) with an unassisted breakaway score to put the game away at 14:56. A slew of near line brawls broke out in the final two minutes as the Railers were whistled for 37 penalty minutes which included Yanick Turcotte’s team leading 9th fighting major.

Notes: Three Stars: 3rd star: Conor Riley (Goal) 2nd star: Pierre Luc Mercier (Goal and Assist) 1st star: Nick Riopel (44 saves, Shutout) …Final shots were 44-29 in favor of Worcester… Nick Riopel (8-8-1) made 44 saves on 44 shots for Adirondack…. Mitch Gillam (5-5-0) made 26 saves on 29 shots for Worcester…. Eamon McAdam was the backup goalie…. Worcester went 0-for-2 on the power play while Adirondack went 1-for-7…. Wade Murphy, Matt Lane, Matty Gaudreau (inj), and Josh Monk (inj) did not dress for Worcester….defenseman Connor Doherty played just his second game of the season – his 1st since Oct 27 at Utah… Ashton Rome and Justin Hamonic each had six shots on goal…. Mike Cornell received 12 penalty minutes and Justin Hamonic 10 in the final two minutes of the third period… Railers VP of Communications and Marketing Eric Lindquist sang the national anthem before the game as there was a cancelation before the game….it was the first time the Railers were shutout this season.

On Saturday, the Railers head to Adirondack for a 7pm start vs. the Thunder.  After the game, the Railers will enjoy a three day holiday break.

Score a Railers specialty STAR WARS themed jersey to benefit the Shine Init...HOME FOR THE HOLIDAYS NIGHT!
Scroll to top