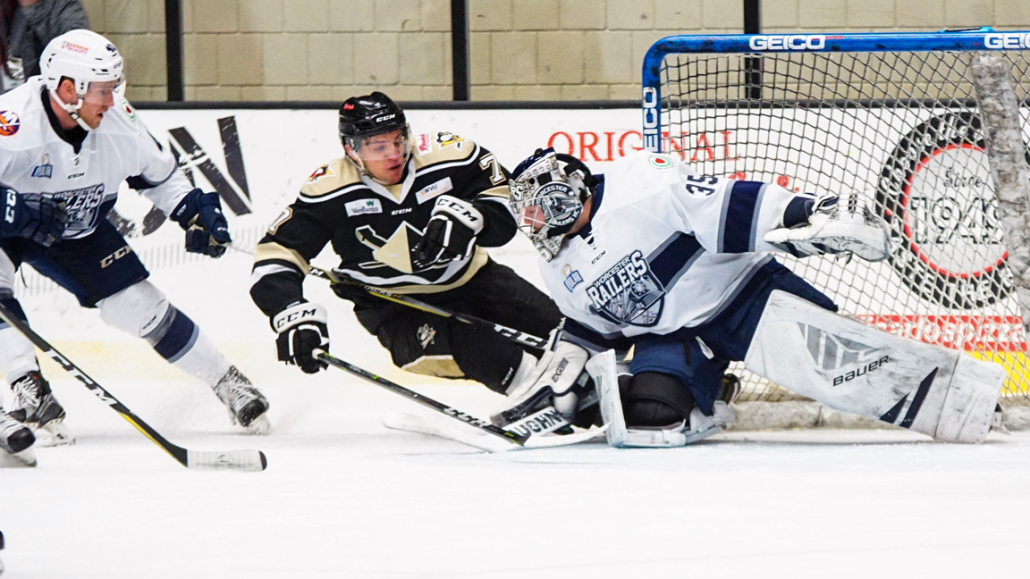 Meeting 7 of 9 vs. Wheeling this season

Wheeling, WV – The Worcester Railers HC (26-25-4-3, 59pts) scored twice on the power play, but fell to the host Wheeling Nailers (30-23-6-1, 67pts) by the score of 5-2 in front of 4,015 fans at the WesBanco Arena on Wednesday morning.   The Railers return home to host the Adirondack Thunder on Sunday, March 11 at 3pm on a KIDS GIVEAWAY SUNDAY with the first 2,000 fans receiving a Railers HC team photo presented by Planet Fitness.

Nick Saracino and Chris Langkow scored for Worcester while Mitch Gillam made 20 saves in net as the Railers fell eight points behind the Nailers for the final playoff spot in the North Division – the Railers have two games in hand with 15 games left.  Wheeling scored three goals in the third period to break a 2-2 tie and Adam Morrison made 33 saves in net as the Nailers pulled through on home ice.

Wheeling grabbed an early first period lead with a nice individual effort by Freddie Tiffels (12th) as he was able to skate through the Railers defense and had his initial shot stopped by Mitch Gillam but the puck then got deflected off a Worcester skate and into the net at 1:16. Worcester would tie the score on the power play as Nick Saracino (9th), stationed in front of the Wheeling crease, deflected a Matty Gaudreau shot at 8:47.  Ross McMullan (4th) snapped a shot from 25 feet after a great feed by Cody Wydo at 16:23 to give the Nailers a 2-1 lead.  Worcester outshot Wheeling 13-8 through 20 minutes of play but Worcester trailed by a goal.

The Railers would tie the score again on the power play as Ryan MacKinnon sent a slap pass towards the side of the net and Chris Langkow (17th) had a perfect deflection past goaltender Adam Morrison at 5:34 of the second period.  The two teams headed to the second intermission tied 2-2 as Worcester held a 27-15 shot advantage.

Mitch Gillam made two unbelievable saves in the first ten minutes of the third period to keep the game tied 2-2.  But Garrett Meurs (20th) broke the tie at 13:04 with a quick shot from 30 feet after a nice feed from the corner by Riley Bourbonnais to give the Nailers their third lead of the game.  Cody Wydo (24th) was awarded an empty net goal at 18:41 after he was tripped at center ice by Matty Gaudreau and Freddie Tiffels (13th) scored 10 seconds later to seal the 5-2 Nailers victory

Notes: Three Stars: 3rd star: Freddie Tiffels (2-0-2) 2nd star: Riley Bourbonnais (0-1-1) 1st star: Garrett Meurs (GWG) …Final shots were 35-25 in favor of Worcester…Adam Morrison (13-11-1) made 33 saves on 35 shots for Wheeling… Matt O’Connor was the backup for the Nailers…. Mitch Gillam (13-13-1) made 20 saves on 24 shots for Worcester… Will King was the backup goaltender for the Railers…. Worcester went 2-for-4 on the power play while Wheeling went 0-for-0…Josh Monk (inj), Justin Agosta (travel), Ben Masella (inj), Yanick Turcotte, and Brian Bowen did not dress for Worcester…. Kellen Jones, Mike Cornell and Eamon McAdam are currently on recall with the Bridgeport Sound Tigers…. defenseman Josh McArdle (Brown Univ) made his pro debut for the Railers and wore #24…. Nick Saracino now has eight points in seven games vs. the Nailers this season and led Worcester with seven shots on goal…Ryan MacKinnon added two assists for the Railers….Worcester fell to 0-2-0-0 on School Day games this season.

The Railers return home on Sunday, March 11 to host the Adirondack Thunder at 3:05pm on a KIDS GIVEAWAY SUNDAY! The first 1,000 kids 12-and-under will receive a Railers HC team photo…. the first 1,000 adults will also receive the team photo courtesy of Planet Fitness! Score a FAMILY FUN PACK at every Sunday game which includes four tickets, four hotdogs, and four sodas for just $80!