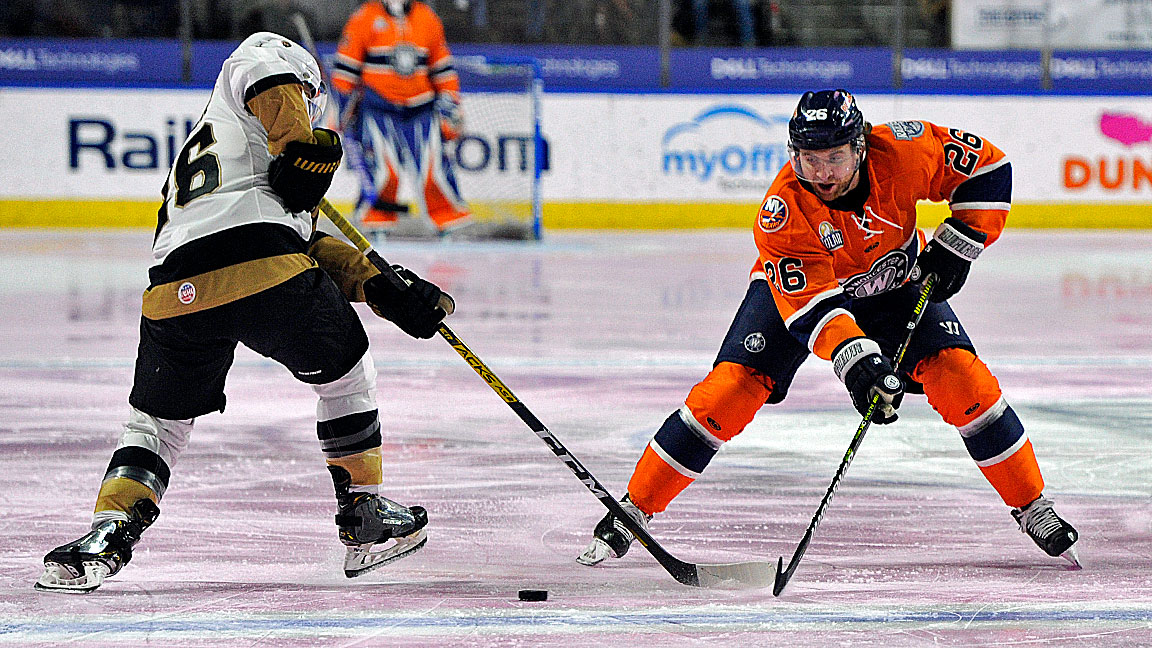 Meeting 9 of 9 vs. Newfoundland this season

Worcester, MA – The Worcester Railers HC(17-30-3-0, 37pts)closed out the weekend falling 4-2 to the top seed Newfoundland Growlers (35-11-0-1, 71pts)in front of 4,791 fansat the DCU Center on Sunday afternoon.The Railers will be on the road for five straight games which starts next Sunday, Feb 16 vs. the Reading Royals at 3pm.

Newfoundland would get on the scoresheet first thanks to Garrett Johnston (3rd) when he fired a wrister from the top of the left circle beating Evan Buitenhuis low glove at 7:36 giving the Growlers a 1-0 lead. In the dying seconds of the first period Nic Pierog (20th) collected a feed from Shane Walsh and snapped it by Maksim Zhukov with just 2.2 seconds remaining in the period to tie it up at 1-1. Despite being outshot 11-5 in the frame the Railers and Growlers were tied 1-1 through 20 minutes of play.

Just 34 seconds into the second frame Colt Conrad was able to find the back of the net for the Growlers handing the away team a 2-1 advantage. Minutes later a point shot from Garrett Johnston would be redirected in front by Dylan Vander Esch (5th) at 5:55 increasing the Newfoundland lead to 3-1. With just three seconds remaining in the period Just Brazeau was able to tuck one past the toe of Buitenhuis giving the Growlers a 4-1 lead which they took into the locker room.

Bo Brauer (6th) scored the only goal of the third period when he received a pass from Connor Doherty in the high slot and from the high slot snapped one by the low glove of Maksim Zhukov cutting the deficit down to 4-2 at 13:58. The goal could not spark the Railers as they fell 4-2 to the Growlers.

Notes: Three Stars: 3rd star: Bo Brauer (1-0-1) 2nd star: Colt Conrad (1-1-2) 1st star: Garrett Johnston (1-1-2, +4) final shots were 26-26 in …. Maksim Zhukov (12-8-1) made 24 saves on 26 shots for Newfoundland…. Evan Buitenhuis (11-18-1) made 22 saves on 26 shots for Worcester while Jakub Skarek served as the backup….Worcester went 0-for-3 on the power play while Newfoundland went 0-for-4…., JD Dudek (IR), Kyle Thomas (IR), Yanick Turcotte (IR), Tanner Pond (IR), Cody Payne (Sick), Dylan Sadowy (IR), Arnaud Durandeau (INJ) and Ian Milosz did not dress for Worcester…. Mike Cornell, David Quenneville, Linus Soderstrom, and are all with the Bridgeport Sound Tigers…. Shane Walsh skated in his 200thprofessional game and recorded an assist…. Dylan Sadowy was placed on the IR Friday…. Nic Pierog has 20+ goals in back to back seasons and is the third Railer to hit 20 goals in a season… Barry Almeida has done it twice while Tyler Barnes had 28 last season…. Connor Doherty, Shane Walsh, Kyle McKenzie all recorded assists for Worcester….The Railers have now lost seven straight games…. Worcester is 0-for-26 in their last seven games on the power-play….Railers are now 13-21-1-0 under GM/Coach Cunniff…. Worcester has 22 games left on the regular season….The Railers are now 4-12-1-0 all-time vs. the Growlers and 3-6-0-0 at the DCU Center.

What’s on tap – Five Straight on the Road!

On Sunday, Feb 16 the Railers will take on the Reading Royals from Reading for a 3pm faceoff. The Railers will then fly out of Philadelphia on Monday in which they will embark on a four-game swing down south which begins in Jacksonville vs. the Icemen on Wednesday, Feb 19 at 7pm.