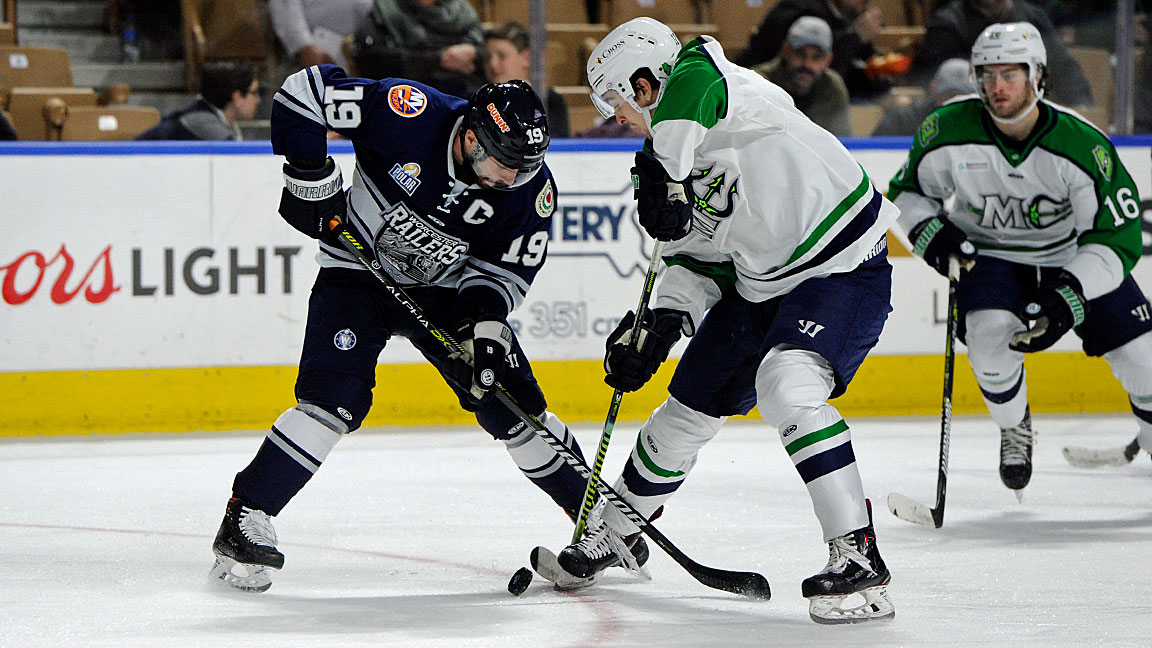 Meeting 3 of 18 vs. Maine this season

Barry Almeida scores in his return for Worcester

Jordan Samuels-Thomas and Barry Almeida scored goals for Worcester while Evan Buitenhuis made 22 saves in net. Michael McNicholas (2-0-2) scored a penalty shot goal in the second period while Connor Lacouvee stood tall in net making 27 saves in net for his sixth win of the season.

Maine would get on the board in the first period at 10:42 when Greg Chase found Michael McNicholas (3rd) back door sneaking one past Evan Buitenhuis to give the Mariners a 1-0 lead. The lead would not last for long when Kyle Thomas (6th) collected the puck in the high slot and snapped one by the blocker of Connor Lacouvee to tie things at 1-1 at 11:01. After a wraparound effort from Jake Elmer denied from Evan Buitenhuis, Alex Kile (5th) was able to bang home a rebound to give the Mariners their second lead of the night at 13:19. Maine took a 2-1 lead into the dressing room after 20 minutes of play and outshot the Railers 12-8.

The only goal in the second period would come from Michael McNicholas (4th) on a short-handed penalty shot where he zipped one over the glove of Evan Buitenhuis at 11:58 giving Maine a 3-1 lead. Worcester outshot Maine 10-7 in the frame but the Mariners held the slight edge 19-18 through 40 minutes of play and a 3-1 lead.

After a scrum in front of the Maine net and a review on the play it was ruled that Barry Almeida (5th) had poked one past Connor Lacouvee at 7:43 of the third period to cut the deficit to 3-2. Maine would answer on the power-play for the first time in six games as Greg Chase (4th) walked down from the right point and ripped one bar down past the shoulder of Evan Buitenhuis at 15:26 to take a 4-2 lead. Despite multiple good chances from Worcester with Buitenhuis pulled they could not get one past Lacouvee as Maine took home a 4-2 victory.

Notes: Three Stars: 3rd star…. Barry Almeida (1-0-1) 2nd star: Connor Lacouvee (27 saves, Win) 1st star Michael McNicholas (2-0-2) ….final shots were 30-26 for Maine…. Connor Lacouvee (6-5-1) 27 saves on 29 shots for Maine.… Evan Buitenhuis (3-8-0) made 22 saves on 26 shots for Worcester while Ian Milosz served as the backup…. Worcester went 0-for-3 on the power play while Maine 1-for-4…. Cody Payne, Ross Olsson, Ivan Chukarov, Anthony Florentino, and Tanner Pond (inj) did not dress for Worcester…. Mike Cornell, Jakub Skarek, and Linus Soderstrom are currently on recall with the Bridgeport Sound Tigers…. Barry Almeida scored in his return after missing the last seven games with an injury and led all skaters with five shots…. Evan Buitenhuis made his sixth straight start …. Kyle Thomas has goals in back to back games and extended his point streak to three games…. Worcester is now 5-5-4-3 all-time vs. the Mariners and 4-2-2-1 at the DCU Center.

What’s on tap – Back at the DCU Center!

On Saturday, Dec 14 the Railers host the Maine Mariners at 7pm on a BIG GAME SATURDAY on BATMAN Night to benefit the Shine Initiative with a Teddy Bear Toss presented by Fidelity Bank! The Railers will wear a special BATMAN themed jersey which will be auctioned off throughout the game to benefit the Shine Initiative. Fans are encouraged to bring a new teddy bear to the game which can then be thrown onto the ice after the Railers score their first goal. The teddy bears will be collected and donated to local charities just in time for the holiday season. Saturday Night Signings will feature a Railers player(s) signing autographs during the first intermission in the Fallon Health Pavilion.