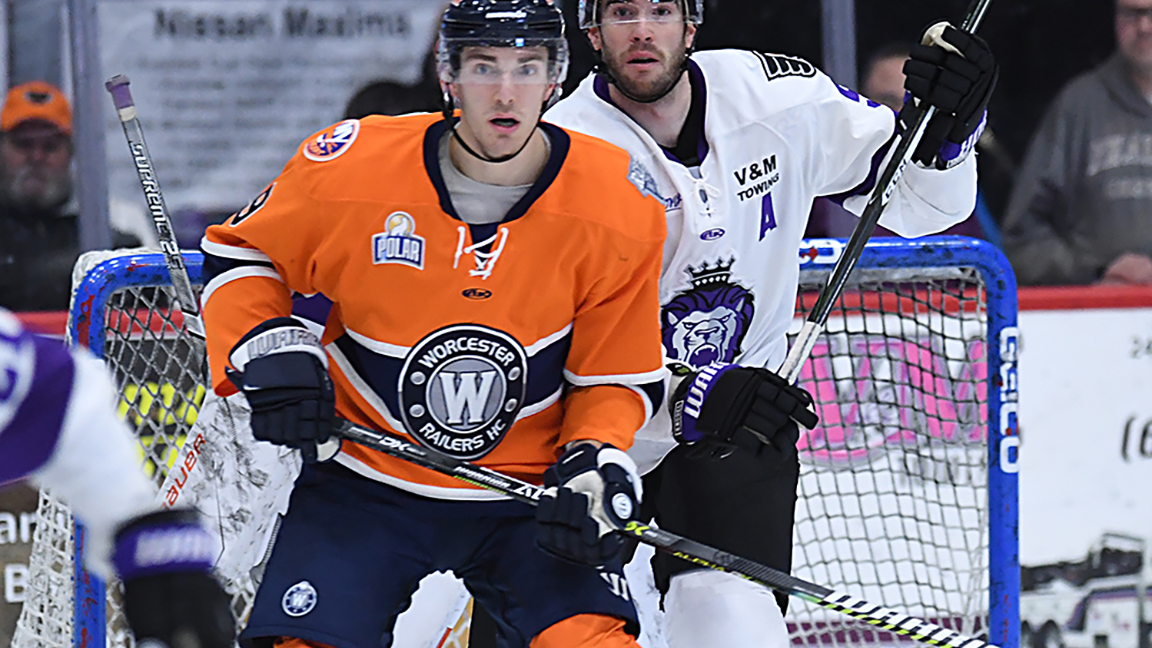 Meeting 10 of 13 vs. Reading this season

Reading, PA – The Worcester Railers HC(17-31-3-0, 37pts)kicked off a five game 10 day road trip with a 3-0 loss to the Reading Royals (29-14-5-0, 63pts)in front of 2,810 fans at the Santander Arena on Sunday afternoon.The Railers will fly to Jacksonville on the Monday morning and face off against the Icemen at 7pm on Wednesday.

Brayden Low (1-0-1), Steven Swavley (1-0-1), and Thomas Ebbing (1-0-1) each scored goals for Reading while Kirill Ustimenko made 33 saves in net for his 19thwin of the season and his second shutout. Ben Thomson led all skaters with eight shots on net while Jakub Skarek made 24 saves in net for the loss.

The only goal of period one would come from Reading when Brayden Low (14th) was able to beat Jakub Skarek through the wickets to give the Royals a 1-0 lead at 11:38. The best chance of the period would come from Shane Walsh midway through the frame on a breakaway but Kirill Ustimenko would make a big glove save. Reading led 1-0 after 20 minutes of play despite being outshot 18-8.

Steven Swavley (9th) increased the Royals advantage to 2-0 finishing off a two on one just 87 seconds into the second period. Worcester was outshot 11-9 in the middle frame and trailed 2-0 through 40 minutes of play. Thomas Ebbing (7th) tacked on an insurance goal with an empty net tally with just 45 seconds left to give Reading the 3-0 victory.

Notes: Three Stars: 3rd star: Steven Swavley (1-0-1) 2nd star: Brayden Low (1-0-1) 1st star: Kirill Ustimenko (33 shots, Win)…. final shots were 33-28 in favor of Worcester …. Kirill Ustimenko (19-4-5) made 33 saves on 33 shots for Reading…. Jakub Skarek (2-6-2) made 24 saves on 26 shots for Worcester while Evan Buitenhuis as the backup….Worcester went 0-for-2 on the power play while Reading went 0-for-4…., JD Dudek (IR), Kyle Thomas (IR), Yanick Turcotte (IR), Tanner Pond (IR), Dylan Sadowy (IR), Arnaud Durandeau (INJ), Bryce Nielsen, and Ian Milosz did not dress for Worcester….Ryan MacKinnon was recalled by Bridgeport on Saturday…. Mike Cornell, David Quenneville, Ryan MacKinnon, and Linus Soderstrom are all with the Bridgeport Sound Tigers…. Justin Murray has now played in 41 straight games…. Eddie Matsushima made his Railers debut and wore #11…. The Railers losing streak hits a season high eight games…. Worcester has been shut out seven times this season…. Ben Thomson led all skaters with eight shots…. The Railers are 0-for-31 in their last nine games on the man advantage…. Worcester has 21 games left on the regular season…. David Quenneville was traded from the New York Islanders to the New Jersey Devils earlier this afternoon…. The Railers are now 16-13-1-0 all-time vs. the Royals and 7-9-0-0 at the Santander Arena.

What’s on tap – Flight to Jacksonville!

The Railers will fly out of Philadelphia on Monday in which they will embark on a four-game swing down south which begins in Jacksonville vs. the Icemen on Wednesday, Feb 19 at 7pm.