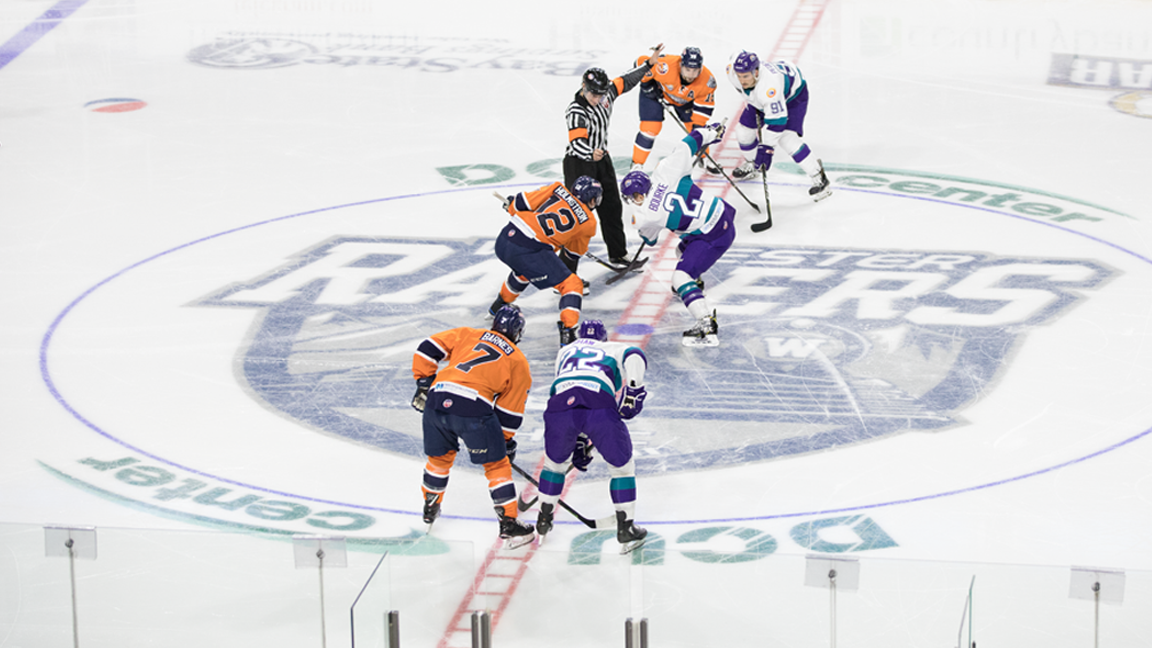 Meeting 2 of 2 vs. Orlando this season

Worcester, MA –The Worcester Railers HC(6-8-2-0, 14pts) closed out their four-home game in five-day stretch with a 4-3 overtime loss to the visiting Orlando Solar Bears (8-5-2-0, 18pts) in front of 4,171 fansat the DCU Center on Sunday afternoon. The Railers host the Manchester Monarchs on 2-3-4 BLACK FRIDAY at 7pm as the Railers will wear a special Marvel Super Hero Black Panther jersey.

Ivan Kosorenkov, Tyler Barnes, and Matty Gaudreau all scored for Worcester as the Railers battled back from 1-0 and 3-1 deficits before forcing overtime.  Charlie Millen made 28 saves for the Railers in his ECHL debut but Orlando defenseman Michael Brodzinski won the game just 33 seconds into overtime as Orlando closed out their five-game road trip with a win.  With the point in overtime, the Railers extend their season long point streak to four games (3-0-1-0).

Neither team scored in a rather quick moving first period of play as Orlando outshot Worcester 10-8 through 20 minutes of play. Charlie Millen made several nice saves and the Railers went 0-2 on the power play as the two teams went into the intermission scoreless.

Orlando finally broke through late in the middle frame as Brady Shaw (9th) banged home a loose rebound at the side of the net on the power play to give the Solar Bears a 1-0 edge.  Shots were 18-15 in favor of Orlando through 40 minutes of play.

Five total goals were scored in a wild third period as the Railers were able to force overtime.  Ivan Kosorenkov (4th) tied the score at 1-1 after a great cross ice feed by Josh Holmstrom at 2:23 on the power play. The Solar Bears would go ahead 3-1 after goals by Chris LeBlanc (1st) at 6:34 and Trevor Olson (2nd) at 8:46 to put the Railers down by two.  Tyler Barnes (4th) deflected a Mike Cornell shot from the point on the power play at 11:02 to get the Railers within a goal.  Matty Gaudreau (2nd) intercepted a clearing attempt at the Orlando blue line and skated in down the left side and snapped a quick shot past the blocker of Hayden Stewart at 16:44 to tie the score at 3-3.  Worcester outshot Orlando 18-13 in the third period.

Michael Brodzinski (1st) would win the game in overtime for the Solar Bears as he snapped a quick shot from 35 feet that broke through the pads of Millen just 33 seconds into the overtime period.

Notes: Three Stars: 3rd star: Chris LeBlanc (1-2-3) 2nd star: Matty Gaudreau (1-0-1) 1st star: Mike Brodzinski (OTG) …. final shots were 34-32 in favor of Worcester… Hayden Stewart (1-0-0-0) made 31 saves on 34 shots for Orlando…. Charlie Millen (0-0-1-0) made 28 saves on 32 shots for Worcester in his first career ECHL start…. while Evan Buitenhuis served as the backup…. Worcester went 2-for-5 on the power play while Orlando went 1-for-3…. Tommy Kelley (inj), Yanick Turcotte (inj), David Quenneville, Tommy Panico, Malcolm Gould (inj), Ryan Hitchcock (ill), and Mitch Gillam (inj) did not dress for Worcester…. Jeff Kubiak is currently on recall with the Bridgeport Sound Tigers….it was the first Sunday home game of the season for the Railers as they were playing in their fourth game in five days…the Railers debut their new orange third jerseys in the game… Mike Cornell (1-3-4) extended his point streak to four games with an assist…. Matty Gaudreau has six points (2-4-6) in his last three games… Tyler Mueller has three assists in his last two games…. Worcester has back-to-back games with two power play goals.

On Friday, Nov 23 the Railers host the Manchester Monarchs on a 2-3-4 BLACK FRIDAY at 7pm! The Railers will wear a special Marvel Super Hero Black Panther jersey and fans can enjoy $2 popcorn, $3 soda, and $4 Bud Lights in the Bud Light Lounge!  Individual tickets start as low as $15!

BLACK FRIDAY with the Worcester Railers
Scroll to top