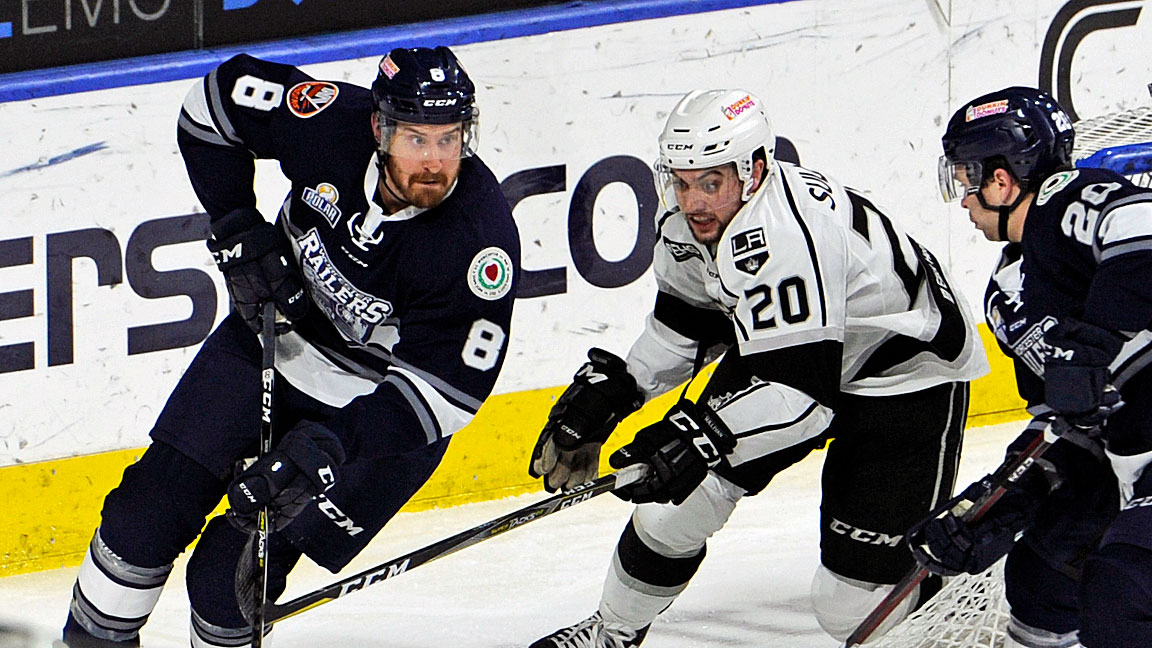 Meeting 8 of 12 vs. Manchester this season

Manchester, NH – The Worcester Railers HC(24-22-5-4, 57pts)concluded their season long seven-game road trip with an exciting 4-3 overtime win over the host Manchester Monarchs(29-24-2-2,62pts) in front of 1,832 fans at the SNHU Arena on Wednesday evening.With the win, the Railers are now twopoints behind the Maine Mariners for the 4thand final playoff spot in the North Division. The Railers return home for a Sunday afternoon game vs. the Adirondack Thunder at 3pm.

Nick Sorkin (1-1-2), Barry Almeida, Matty Gaudreau (1-2-3), and David Quenneville (OTG) scored for Worcester while Mitch Gillam made 33 saves in net as the Railers finished 3-2-1-1 on their seven-game road trip. Sam Kurker scored twice to lead the Monarchs offensively while goaltender Charles Williams made 40 saves in net. Worcester trailed 1-0, led 2-1, and 3-2 before David Quenneville won the game at 3:31 of overtime.

Each team scored a goal in the opening 20 minutes of play as Manchester controlled the first ten minutes and the Railers grabbed the second half of the period.  Sam Kurker (10th) scored on his own rebound at 9:28 to give Manchester a 1-0 lead but Nick Sorkin (11th) deflected a Rob Powers point shot at 17:01 to tie the score.  Shots were 15-11 in favor of Manchester through 20 minutes.

Neither team scored in the third period as Worcester outshot Manchester 15-8 before the game headed to overtime.  In a back and forth overtime session, rookie David Quenneville (4th) skated into the zone and stick handled before sniping a shot from 40 feet top shelf at 3:31 to give Worcester a 4-3 overtime victory.

The Railers return home on Sunday, March 3 with a 3pm faceoff vs. the Adirondack Thunder on a KIDS GIVEAWAY SUNDAY.  The first 1,000 kids 12-and-under will receive a Railers HC jersey lunchbox courtesy of Pepsi Worcester. Score a SUNDAY FUNDAY ticket pack which includes 4 tickets and 4 beers or 4 tickets with 4 sodas and popcorns starting at just $60.  Coverage begins at 2:35pm on 98.9 NASH Icon.