Eric Lindquist checking back in! Hockey season is getting underway…. NHL preseason games have started followed by AHL and ECHL camps over the next few weeks. We are going to have to find a few ways to get our members together and watch some puck over the next over the next nine months. We have discussed about the possibility taking a few busses up to Manchester to watch the Monarchs in action (scout out our BIGGEST rival for next season) later on this winter…. I will make sure to keep everyone posted so that we can all deal with our hockey withdrawals together!

There was a big article in the Worcester Telegram on Wednesday in regards to the Railers possibly sharing the DCU Center with Holy Cross hockey. Click HERE for the latest update with a lot of great information from Railers owner Cliff Rucker. On another note, Cliff and president Mike Myers are in Kansas City for the ECHL board of governor’s meeting. I will give you any updates next time around.

Speaking of the ECHL, the 2017 ECHL All-Star Classic will be held in Glens Falls, NY and this season will have an interesting format (which I like). Both the skills competition and the game will be held on the same day with the skills taking place during the half time of the game. The game will feature the Adirondack Thunder vs. ECHL All-Stars and will feature 5-on-5, 4-on-4, and 3-on-3 action. For the complete breakdown please click HERE. I’m thinking about making the trek north to catch the event….any other takers?

As of 3pm on Sept 28, we currently have 754 members on board for our inaugural season. Remember, the first 1,000 members will be part of the Founders Circle… our goal is to reach 1,500 members to get things rolling… we are making progress…more than half way there! Don’t forget to RSVP for the SKAT TO THE DATE event at the DCU Center on Oct 14 (Click HERE for more information). Members are encouraged to bring a friend to the event that may be interested in becoming a member!

Former Worcester Sharks captain and community man of the year Mike Moore has taken his talents overseas and now plays in the DEL for the Fischtown Penguins. Moore had spent the last two seasons with the Hershey Bears and this season will be his first outside of North America…. best of luck to Mooresy! Former tough guy Jimmy Bonneau retired this offseason and ended up as a professional scout for the San Jose Sharks. I spoke to Bones a few times this summer and he was supper excited joining the Sharks hockey operations department. I will miss watching Jimmy drop the mitts but happy for him as he begins his new career off the ice. (Click HERE for one of my favorite Bonneau fights at DCU Center). The Worcester Sharks all-time games played leader John McCarthy (tied with Nick Petrecki) signed on for another season with the Sharks organization. The former Worcester captain turned 30 years old this summer and has the distinction for playing more games for coach Roy Sommer than anyone else. I’ve always been a big fan of McCarthy and should be reason enough for us to follow the Sharks/ Barracuda again this season as we wait for Oct 2017! 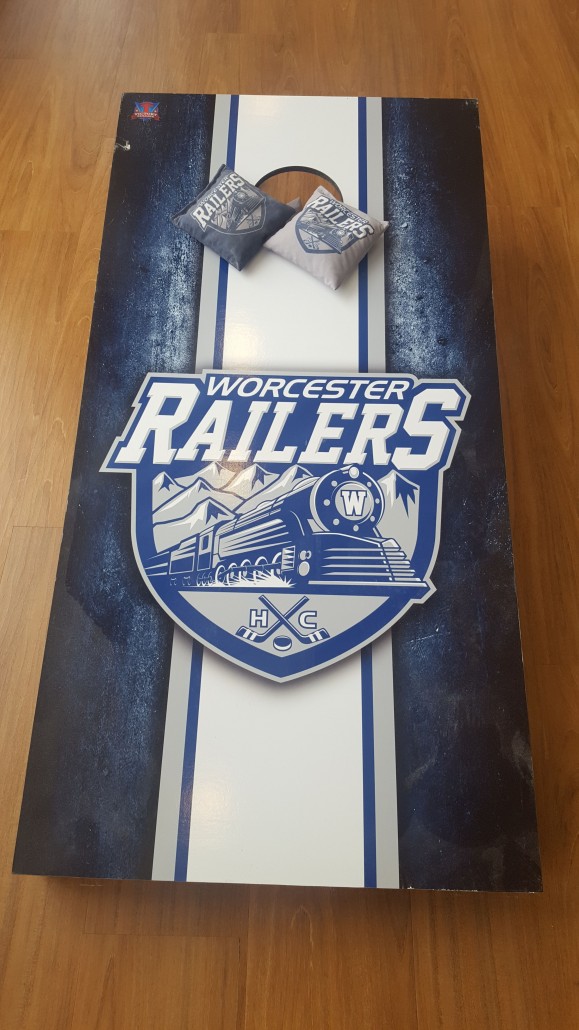 It was great to see some of you guys at Kids Fest at Wachusett Mountain last weekend! If you paid us a visit at the event, you may have noticed our customized Worcester Railers corn hole set. I have been DESTROYING our front office staff in corn hole over the last few weeks at the office…. I could use some competition… so if you are in the area… stop by the front office and I would be more than happy to throw some bean bags with you! That will do it…. If you have a question…. shoot me a line at EricL@RailersHC.com. Until next time…. HOCKEY, HOCKEY, HOCKEY…WOO!