Eric Lindquist checking back in! Hope everyone had a great turkey day and Happy December. The Worcester Oval skating rink opens up on December 2….. winter is in the air! A lot to update everyone on since the last time we chatted….so let’s get right into it!

Front Office Shaping Up
The Railers added two new faces to the front office this week. Auburn native and former Sharks youth hockey extraordinaire Andrew Nawn returned to Worcester after spending the last 18 months in the Florida Panther ticket office. Andrew joins the Railers as the Manager of Group Sales and HC Memberships and is happy to be back home. I worked with Nawn for four years with the Sharks and glad that he made the trek back to Worcester. We also added Adam Bryant as the Office Manager, Business Administration. Adam is joining us after 10 years with the US Department of Defense and continues to serve the US Army Reserve as a First Sergeant. Adam is excited on his new gig – make sure you introduce yourselves to Adam at the UGLY SWEATER PARTY on December 12.

Members Update
As of 10am on December 1, we currently have 1032 members on board for our inaugural season – which means the Founder’s Circle is all wrapped up! However, the Railers Foundation has teamed up with the Worcester Telegram & Gazette Santa Fund for a Holiday Power Play! For every new membership deposit between now and Jan 15, the Railers Foundation will donate $200 to the Santa Fund…. the goal is 500 new memberships for a $100,000 donation! For more information on the Holiday Power Play please click HERE.

Ugly Sweater Party
In case you missed…. Boston Bruins anthem singer Rene Rancourt will attend the members only holiday party as Mezcal on December 12. Rene will sing both anthems at Mezcal before the Bruins play the Canadiens on TV that night! Make sure to wear your ugly sweater for a chance to win club level Bruins tickets! More info on the holiday party click HERE! Also at the party, Director of Memberships Mike Fisher will let everyone know about the select-a-seat process….. don’t forget that Sharks season ticket holders will have the opportunity to save their old seat locations! Hope to see many of you on the 12th!

Worcester Hockey Alum
Bill Ballou caught up with old friend TJ Fox about his new career…. Check out the story by clicking HERE. Ryan Carpenter scored his 1st NHL goal on Nov 30 in the Sharks 4-1 win at LA…..Micheal Haley is still dropping the mitts with the SJ Sharks and has 32 penalty minutes in 12 games….. Torrey Mitchell played 18 games with the Worcester Sharks and is currently with the Montreal Canadiens where he has seven points (5-2-7) in 23 games this year…. Marek Viedensky is currently playing in the KHL with Bratislava Slobven and has eight points (1-7-8) in 20 games so far this season. And last but not least, congrats to former Worcester Sharks equipment manager Vinny Ferraiuolo as he was behind the bench for his 1,500th professional game last week for the SJ Sharks – I did not know Vinny could count that high! 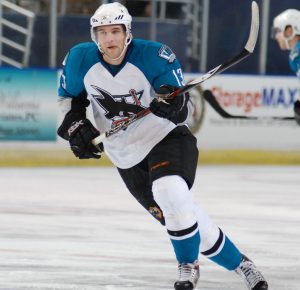 TJ Fox with the Worcester Sharks in 2008

Around the ECHL
The second coaching change already in the ECHL hit earlier this week as former Boston Bruins head coach Robbie Ftorek took over the 2-11-4-0 Norfolk Admirals…. Florida (.794) has the best winning percentage in the East while Alaska (.735) leads the West…. The Alaska Aces and the Toledo Walleye have each won six straight games….Fort Wayne leads the ECHL in attendance averaging 7,681 fans per game….former Worcester Shark Peter Sivak leads the ECHL with 15 goals…actually three of the top 4 point getters in the ECHL played for Worcester (Sivak, Brock Higgs, and Chad Costello)….Brampton allows the most goals per game at 4.19.

RIP Bob Chase
The voice of the Fort Wayne Komets for the last 63 seasons passed away on Nov 24. Bob Chase called over 4,500 games for the Komets and is an icon in the sports industry. His name is right up there with any of the greats that called a hockey game and will be surly missed by the entire hockey community. I was looking forward to meeting him next year and shake his hand. Click HERE for a nice write up on the terrific career of Bob Chase. RIP.

Wrapping things Up
I cannot remember the last time I lost in corn hole in the office…. I need some competition! Looking forward to seeing you guys at the holiday party on the 12th – I still need to find an ugly sweater (maybe I will borrow one of Mike Fishers!). That will do it…. If you have a question…. shoot me a line at EricL@RailersHC.com. Until next time…. HOCKEY, HOCKEY, HOCKEY…WOO!