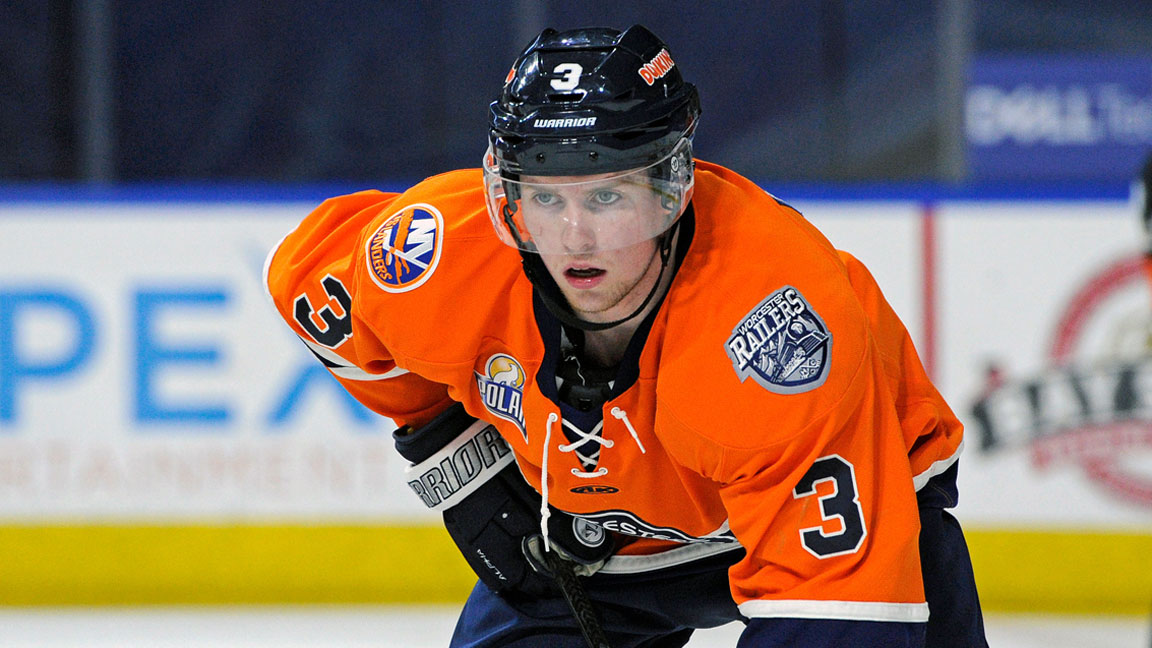 Railers host games Saturday and Sunday at the DCU Center

Portland, ME – The Worcester Railers HC(17-29-2-0, 36pts)were edged out 2-1 by the Maine Mariners (26-19-1-1, 54pts)in front of 2,449 fans at the Cross Insurance Arena on Friday night.The Railers return home to the DCU Center Saturday night for Pink in the Rink Night hosting the Atlanta Gladiators at 7pm.

Rookie defenseman Justin Murray (1-0-0) scored his first professional goal on his 68thshot of the season while Evan Buitenhuis made 25 saves in net for the loss. The Mariners received goals from Dillan Fox (1-0-1) and Morgan Adams-Moisan (1-0-1) while Connor Lacouvee stood tall in net for the Mariners making 45 saves in route to the victory. The Railers went on a four-minute power-play with 3:16 to play in the third period but were unable to find the back of the net.

Worcester had two power-play opportunities in the first period, one which was a partial five on three but the Railers could not convert. Dillan Fox (20th) would pot the only goal of the stanza coming on a breakaway firing one low blocker on Evan Buitenhuis to give the Mariners a 1-0 lead with 5:10 to play in the period. Maine took the 1-0 lead into locker room through 20 minutes of play with shots in favor of the Railers 13-12.

Maine scored the only goal of the middle frame when Morgan Adams-Moisan (7th) sent one over the glove of Evan Buitenhuis from the left circle increasing the Mariners advantage to 2-0 at 13:28 of the second period. Worcester outshot Maine 14-8 in the stanza but it was the home team that held a 2-0 lead through 40 minutes of play.

A forecheck from Bo Brauer and Dante Salituro set up Justin Murray (1st) who blasted one past the glove of Connor Lacouvee from the left circle for his first professional goal which cut the Railers deficit down to 2-1 at 5:36 of the third period. Worcester was given a four-minute power-play with 3:16 to play on a high stick double minor. Evan Buitenhuis was pulled for an extra attacker with 1:40 to play and then the Railers went on a six on three advantage with 32 seconds left in regulation on another Maine penalty. Despite generating multiple chances, they could not find the back of the net as Maine skated to a 2-1 victory.

Notes: Three Stars: 3rd star: Morgan Adams-Moisan (1-0-1) 2nd star: Dillan Fox (1-0-1) 1st star: Connor Lacouvee (45 saves, Win) final shots were 46-27 in favor of Worcester…. Connor Lacouvee (16-9-2) made 45 saves on 46 shots for Maine…. Evan Buitenhuis (11-17-1) made 25 saves on 27 shots for Worcester while Jakub Skarek served as the backup….Worcester went 0-for-5 on the power play while Maine went 0-for-5…., JD Dudek (IR), Kyle Thomas (IR), Yanick Turcotte (IR), Tanner Pond (IR), Cody Payne (Sick), Dylan Sadowy (IR), Jack Macnee and Ian Milosz did not dress for Worcester…. Mike Cornell, David Quenneville, Linus Soderstrom, and are all with the Bridgeport Sound Tigers…. Justin Murray scored his first professional goal and it came on his 68thshot of the season…. Nic Pierog led all Worcester skaters with six shots…. Bo Brauer and Dante Salituro collected assists for Worcester…. Bryce Nielsen made his ECHL debut after signing with Worcester earlier today and wore number 21…. The Railers have scored 14 goals in their last 33 periods…. Phil Johansson was put on waivers earlier toady…. Dylan Sadowy was placed on the IR earlier today…. the Railers are now 13-19-1-0 under GM/Coach Cunniff…. Worcester has 24 games left and eight will be against Maine…. The Railers are now 7-10-4-3 all-time vs. the Mariners and 1-7-2-2 at the Cross Insurance Arena.

What’s on tap – Home Weekend at the DCU Center!