Hey guys Cam McGuire (PR & Social Media Coordinator) for the Railers checking back in with another McGuire Wire as we are ANOTHER week closer to Opening Night October 12th vs. Adirondack (only 63 or 62 days away). On the agenda this week is:

-Former Railers on the Move

On Thursday (8/8) the Railers announced their 10th player signing for the 2019-20 season with defenseman Anthony Florentino. The 24-year-old spent the last two seasons with the Cincinnati Cyclones where he totaled 109 games played scoring five goals and 12 assists (5-12-17) along with 83 penalty minutes. He also appeared in 15 playoff games for the Cyclones over the past two years.

Florentino played four years at Providence College from 2013-17 skating in 131 games scoring 22 goals and 32 assists (22-32-54) along with 98 penalty minutes. A member of the 2015 Friars National Championship team, he scored the first goal in the 4-3 win over Boston University WATCH HERE and earned a spot on the Frozen Four All-Tournament Team.

I chatted with Florentino earlier this week and he said that he is excited to get back to the east coast and be surrounded by friends and family. The West Roxbury, MA native was roommates with current Railers defenseman Kyle McKenzie for all four years they were at Providence together.

With the signing the Railers now have two defensemen on the roster that were formerly drafted by the Buffalo Sabres.

The Railers are up to five defensemen signed for the 2019-20 season.

2018-19 Results: The Railers and Thunder met 11 times last season with the Railers posting a 7-4 record vs. Adirondack.

(F) Anthony Croston. The 6-0, 190lb native of Phoenix, AZ enters his first professional season after spending the last four years at Arizona State University where he played in 127 games accumulating 66 points (25G, 41A).

(D) Kelly Summers. The 6-1, 196lb native of Golden Lake, ONT returns for his second season with the Thunder after playing in 49 games last year where he totaled 24 points (5G, 19A). Prior to turning pro Summers played four years at Clarkson University from 2014-18 skating in 149 games accumulating 71 points (18G, 53A).

(D) Michael Sdao. The 6-4, 227lb native of Bloomington, MN returns for his second season with the Thunder after playing in 31 games last year where he registered seven points (3G, 4A). The 2019-20 season will be his seventh pro season. Sdao won a Kelly Cup in 2017 with the Colorado Eagles.

(F) Marly Quince. The 6-0, 203lb native of Sioux Lookout, ONT enters his first pro season after spending the last four years with Clarkson University where he accumulated 101 games played and 29 points (11G, 18A).

(D) Zachary Borsoi. The 6-4, 216lb native of Brossard, QC enters his first pro season after playing at Utica College the last four where he played in 110 games accumulating 63 points (18G, 45A).

(F) Austin Plevy. The 5-10, 185lb native of Langley, B.C. enters his first pro season. Plevy played three years at UMass Amherst from 2015-18 where he played in 104 games registering 50 points (20G, 30A). Last season he transferred to Northeastern University as a graduate transfer and played 39 games for the Huskies recording eight points (5G, 3A).

(F) Craig Martin. The 6-0, 181lb native of Trail, B.C. enters his first pro season after spending the last four years at Quinnipiac University where he played in 134 games accumulating 75 points (27G, 48A).

(F) Hans Gorowsky. The 5-10, 181lb native of Lino Lakes, MN played in four games for the Thunder last season and scored two goals. Gorowsky spent the last four years at The University of Alabama in Huntsville where he played in 136 games accumulating 50 points (26G, 24G).  While playing for the Fairbanks Ice Dogs he won a NAHL Robertson Cup in 2014 with Railers forward Ross Olsson.

(D) Tommy Parran. The 5-11, 185lb native of Shaker Heights, OH played in three games for the Thunder last season registering an assist after playing the last four years at Ohio State where he played in 121 games accumulating 26 points (7G, 19A).

The Railers and Thunder will meet 14 times this season. See below for all games vs. Adirondack. RED= home game.

The Railers are offering Worcester Regional Chamber of Commerce members an exclusive offer! We are excited to introduce the Small Business Ticket Package!

For only $3,000 the Railers Small Business Ticket Package comes with:

The time is here and we are excited to announce the Railers 2019-20 promotional schedule on Thursday (8/15). Be on the look out for Cam’s Corner this Tuesday (8/6) as we will be giving away some of this year’s promotions!

Former Railers on the Move 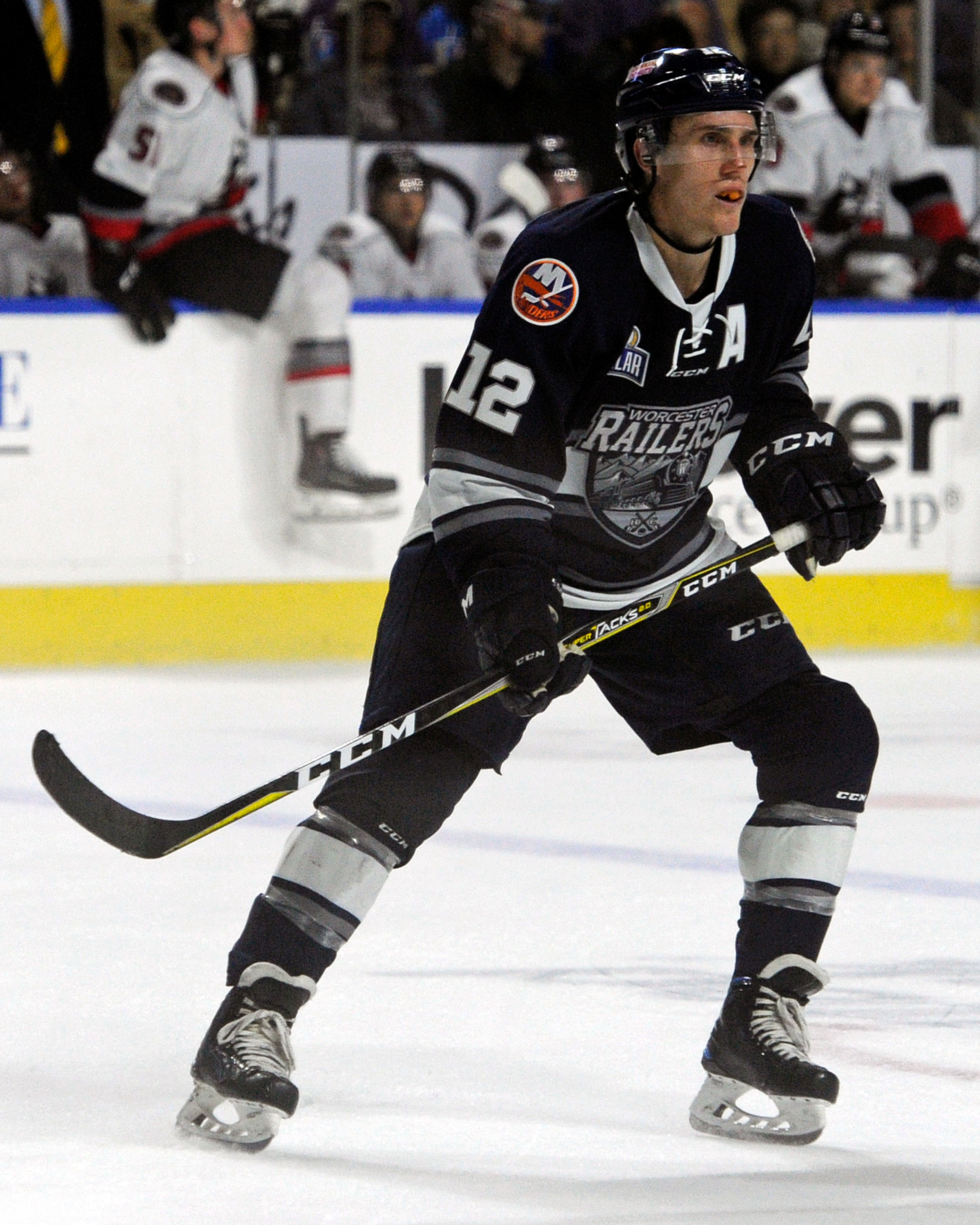 ICYMI every Tuesday from 1-2pm you can now watch Cam McGuire and Josh Lyford on the Railers Radio streaming LIVE on Facebook. Click HERE to watch. You can also listen HERE. On another note, unity radio has changed their frequency from 102.9 FM to 97.9 FM.

On Monday (8/12) the first annual Railers vs. Bravehearts softball game will take place over at Hanover Insurance Park at 6pm. I did witness Peterman knock two out of the park in a whiffle ball game a couple weeks ago but, I am confident in our front office!

Well we are another week closer to the season and I CAN NOT WAIT! A lot more off-season news to come so be sure to check back in every week with the McGuire Wire! Have anything you want me to cover?? Send me over your questions at camm@railershc.com. Until next time…

Back to School Sale
Scroll to top