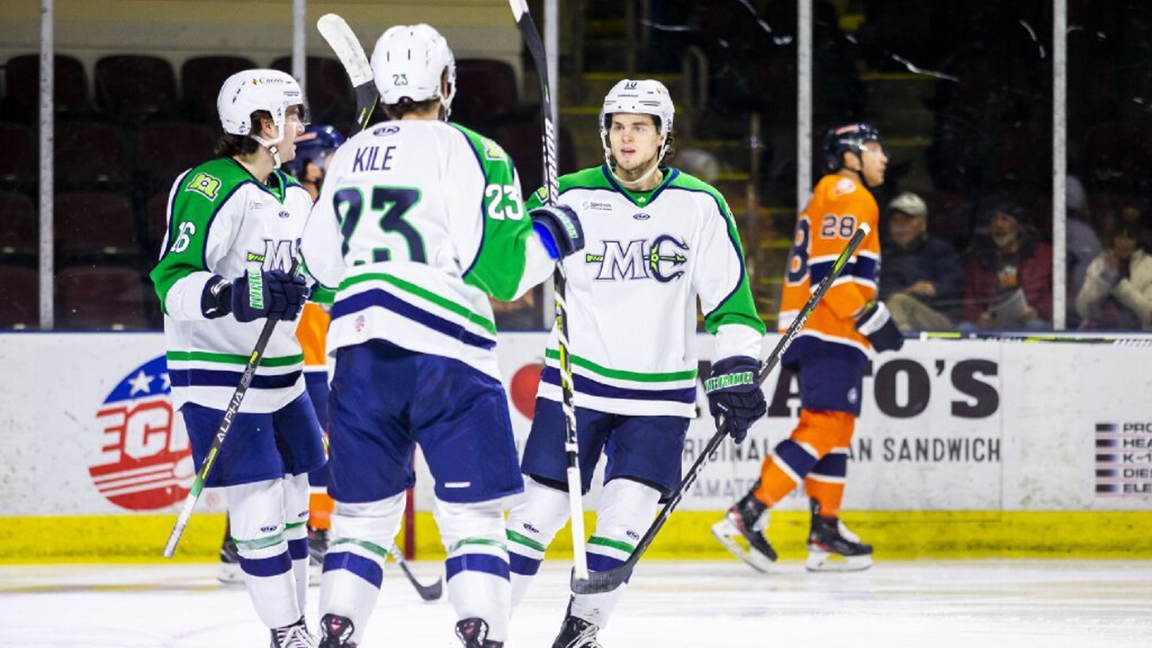 Meeting 9 of 18 vs. Maine this season

Portland, ME – The Worcester Railers HC(17-28-2-0, 36pts)began a four game in six day stretch with a 4-1 loss to the Maine Mariners (25-19-1-1, 52pts)in front of 1,144 fans at the Cross Insurance Arena on Tuesday night.The Railers hit the road for one more game in Friday night vs. the Mariners at 7:15pm before a pair of games at the DCU Center Saturday and Sunday.

The first goal of the contest came from Michael McNicholas (7th) who finished off a tic tac toe three on two passing play to give the Mariners a 1-0 lead 3:16 into the game. In the final minute of the period Marc-Oliver Crevier-Morin sent a laser of a wrist shot past the right shoulder of Evan Buitenhuis from the left circle to take a 2-0 advantage with 26 seconds left in the frame. The Railers trailed 2-0 after 20 minutes of play despite outshooting the Mariners 14-12.

The only action to show for in the second period came with one second left when Ross Olsson (7thFM) and Sean Day (1stFM) dropped the gloves behind the Railers goal line after Day had shot the puck into an empty net after the whistle had already been blown. Maine held a 2-0 lead through 40 minutes of play while Worcester held the edge in shots 22-21 overall.

Ryan Culkin (7th) increased the Maine lead to 3-0 at 5:25 of the third period but 52 seconds later from the right circle Drew Callin (10th) would cut the deficit back down to two at 3-1. Maine tacked on an empty net score with just 5.4 seconds left courtesy of Dillan Fox (19th) as the Mariners handed Worcester a 4-1 loss.

Notes: Three Stars: 3rd star: Connor Lacouvee (28 saves, Win) 2nd star: Alex Kile (0-3-3, +4) 1st star: Greg Chase (0-3-3, +3) …. final shots were 29-27 in favor of Worcester…. Connor Lacouvee (15-9-2) made 28 saves on 29 shots for Maine…. Evan Buitenhuis (11-16-1) made 23 saves on 26 shots for Worcester while Jakub Skarek served as the backup….Worcester went 0-for-2 on the power play while Maine went 0-for-3…., JD Dudek (IR), Kyle Thomas (IR), Yanick Turcotte (IR), Tanner Pond (IR), Cody Payne (Sick), Dylan Sadowy (TRV), and Ian Milosz did not dress for Worcester…. Mike Cornell, David Quenneville, Linus Soderstrom, and are all with the Bridgeport Sound Tigers…. Ross Olsson recorded his sixth fighting major and seven penalty minutes… Olsson joins Yanick Turcotte and Mike Cornell as the only three Railers players with over 100 penalty minutes in a season…. Ben Thomson added an assist for Worcester…. the Railers are now 13-18-1-0 under GM/coach Cunniff…. The Railers have lost four straight games for the third time this season and have been outscored 20-4 in the last four contests…. Worcester has 25 games left and nine will be against Maine…. The Railers are now 7-9-4-3 all-time vs. the Mariners and 1-6-2-2 at the Cross Insurance Arena.

What’s on tap – One More in Portland Before Home Weekend!

On Friday, Feb 7 the Railers hit the road to take on the Maine Mariners at 7:15pm.

PINK IN THE RINK WEEKEND!