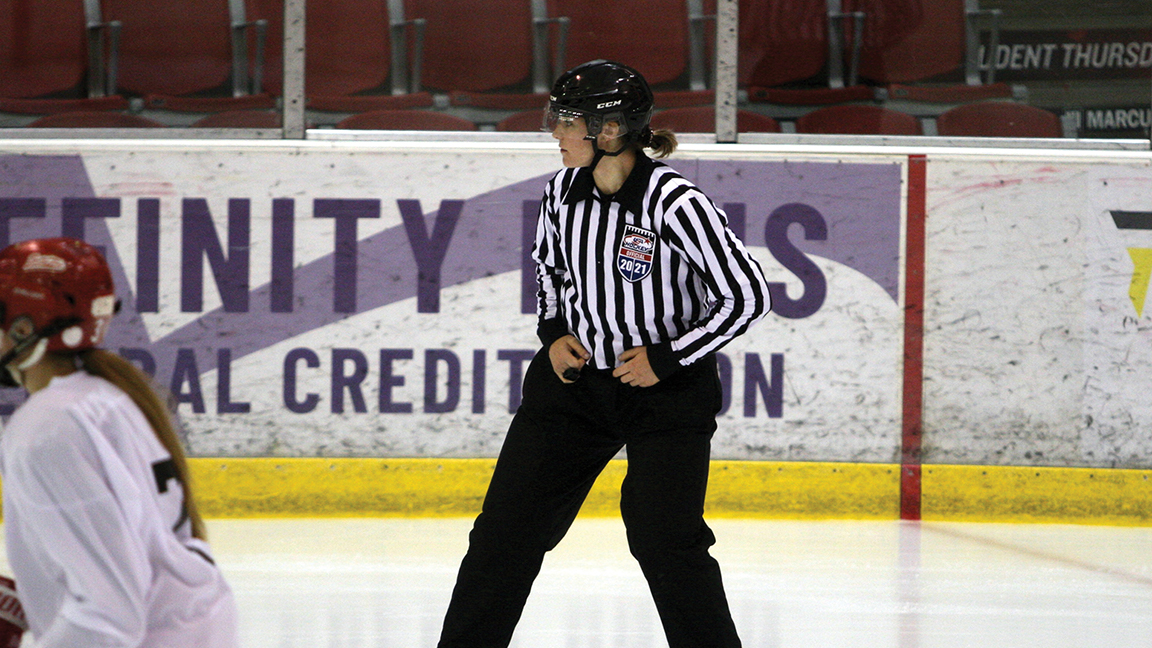 Laura Schmidlein to make ECHL History as First Female On-Ice Official at Railers Game December 11th
By the ECHL
ECHL history will be made on Dec. 11 when the Worcester Railers host the Maine Mariners. For the first time in the 34-year history of the League, a woman will be a part of the officiating crew as Laura Schmidlein will serve as one of the linespeople in the game.
Hockey has been an important piece throughout Schmidlein’s life, including a four-year collegiate career at Amherst College. Following her graduation in 2019, officiating became a way for her to stay involved in the sport she loves.
“I started playing like everyone else when I was little and played through college,” she said. “Hockey has always been such an important part of my life and after graduating, skating games in this new capacity of officiating was my way of maintaining that piece of me.”
Despite having no prior experience as an official, working the lines has been a seamless transition to her post-playing career.
“I took to it right away because I had this huge void that I could fill so easily with hockey,” Schmidlein said. “That first year after college, I was working full-time in software development Monday through Friday and then on the weekends I was skating anywhere from five to 12 youth games where it takes up your whole weekend. I really enjoyed that and found it very rewarding. By working with great officials I was learning really fast and was able to do higher-level games.”
Schmidlein’s growth in officiating has come quickly from those early days on the youth rinks. For the 2021-22 season, she is working college and women’s professional games in the Premier Hockey Federation, in addition to the games she will work in the ECHL.
“I still do youth games, but I’ve advanced to college hockey, and also doing PHF games and it’s been a cool path,” she said. “I didn’t realize how quickly I could get to where I am but it’s been a run and rewarding experience to this point.”
While her debut in the ECHL will surely be a great memory in the future, a trip to Nashville last weekend provided one of the best memories she has had to this point in her officiating career.
“This past weekend I got to go down to Nashville to work a showcase tournament for girls, and they also had four college teams playing there,” she recalled. “It was a great way for the girls who were there to see and experience high-level hockey right next to them, so it was cool to be a part of that.”
Working with some of her mentors, who have helped her grow into the official she has become, has also been a rewarding experience.
“I also got to work a PHF game in Boston last month with an official that was one of my biggest mentors,” Schmidlein said. “She was an instructor at a camp, and it was cool to work a women’s pro game with an official that was so important to me. And I’ve worked in my college league with my other instructor, so I guess I’ve had a couple of fun games that I’ve worked.”
Schmidlein is one of two female officials on the ECHL officiating staff for the 2021-22 season, along with fellow linesperson Kirsten Welsh. The American Hockey League has also welcomed 10 female officials onto their officiating staff for this season, and the opportunities for these female officials is not lost on Schmidlein.
“A lot of these women have been my mentors since I’ve started officiating and it feels so special to be part of a great group of people,” she said. “It’s really great what’s happening in pro hockey right now so it feels special to be a part of that.”
Eugene Binda and Dave Lezenski, who have supervised Schmidlein in other leagues, know that she will put forth whatever effort is necessary to advance her career.
“This past summer, Referees Crease held a junior training camp which, had supervisors for multiple college and professional leagues. Laura already had a full season working college hockey, however she wanted to improve on her on ice mechanics, and decided to come to camp,” said Binda, Referees Crease President. “It was the best move she could have made. She is an excellent skater, and along with having the positive attitude and willingness to accept feedback, made Laura an easy choice for advancement to ECHL.”
“Laura is a tremendous young official with a very bright future,” said Lezenski, Supervisor of Officials for the Women’s Hockey East Association. “More importantly, she is a great person with strong character, sincerity and a desire to be the best at whatever she sets out to do.”
ECHL Commissioner Ryan Crelin also recognizes the importance of Schmidlein’s debut.
“Having Laura join the ECHL Officiating Team is a monumental moment in our League’s history as the first on-ice female official assigned to work a regular season game,” said ECHL Commissioner Ryan Crelin. “This assignment to our League is a credit to her growth as a top prospect at her position in all of hockey and we are excited to see her continue to develop through working games at our level in the ECHL.”
Schmidlein is now turning her attention to her professional men’s hockey debut next Saturday in Worcester, but for her, it will be just like working any other game she has officiated in the past.
“There’s this thing that I’m realizing and it’s called the new league feeling,” Schmidlein said. “So with every new league you join, there’s this really overwhelming feeling of this isn’t what I’m used to. I’ll just be telling myself that it’s just another hockey game and I know how to skate a hockey game and if I’m able to listen to myself I think that it will go really well.”
https://railershc.com/wp-content/uploads/2021/12/Laura-Schmidlein.jpg 648 1152 admin /_media/2021-22/logo.png admin2021-12-03 10:55:572021-12-03 10:55:57Laura Schmidlein to make ECHL History as First Female On-Ice Official at Railers Game December 11th