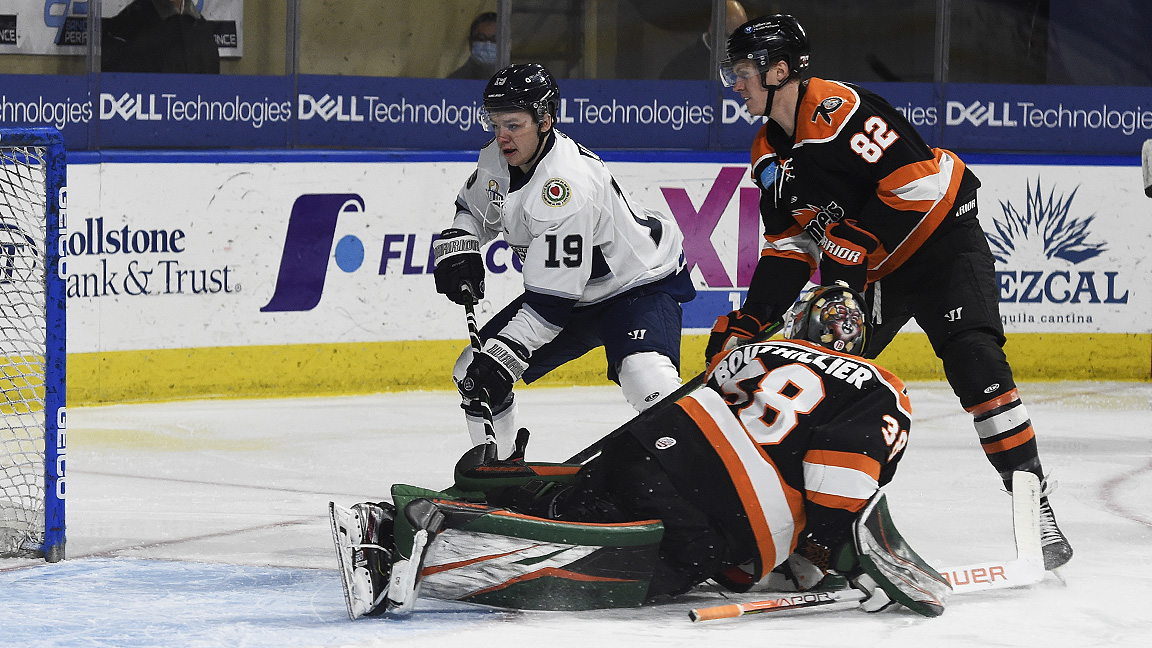 Worcester to host Kalamazoo next Friday, Saturday, and Sunday at the DCU Center

WORCESTER, MASS. – The Railers tried driving as far as they could Sunday with their “low fuel” warning light on, but the tank finally ran dry after 45 minutes in a 6-4 loss to the Fort Wayne Komets, Worcester playing its third game in 2 1/2 days.

Worcester had a 3-0 lead with the game more than half over. It marked merely the second time in team history the Railers had a three-goal lead in a game and didn’t get at least one point out of it.

The last thing the home team needed was to spend a lot of time in the penalty box but that’s what happened. The Railers had to kill eight penalties to two for Fort Wayne and the Komets capitalized once, officially, but twice in reality.

It was the fifth time in franchise history Worcester had to kill that many penalties. The Railers are 0-5-0 in those games.

They also had to play much of the game with five defensemen. Myles McGurty, hit in the face with a puck on Saturday night, was reinjured four minutes into the first period and did not return.

“It was three in three, and we traveled from Maine on Friday night,” coach David Cunniff said, “so it was really unfortunate that the game was called the way it was because we really didn’t have much of a chance today…it’s asking too much of the guys.

“It’s a matter of time before things break down.”

Jordan Lavallee-Smotherman had two goals for the Railers and has 17 for the season. Anthony Repaci and Collin Adams had the other Worcester goals.

Smotherman made it 1-0 at 1:13 of the first period. He was set up by defenseman Austin Osmanski, who slid him a long pass from the left side. Smotherman connected from the bottom of the right circle and Osmanski’s assist was his first professional point.

It was 2-0 less than a minute later as Adams notched his third of the season. He was set up in close by Cole Coskey as the clock registered 2:01 Repaci gave the Railers a 3-0 lead at 5:49 as he and Blake Christensen worked a textbook 2 on 1.

That was it, again, for Komets goaltender Zach Bouthillier. As on Saturday night, he was replaced by Mario Culina with his team in a big hole. Bouthillier had a weekend to forget. In two games he allowed 7 goals on 15 shots in a little more than 20 minutes in net.

Ken Appleby made 20 saves in the first period to maintain Worcester’s lead but Fort Wayne continued to press in the second period with referee Alex Normandin sending Railers to the penalty box at a steady pace.

The Komets finally broke through at 13:19 when Alvaro sent home a one-timer from the bottom of the left circle. Fort Wayne then made it 3-2 at 19:41, just as a penalty to Jacob Hayhurst expired. Cooper deflected home a shot by Kellen Jones.

Smotherman scored at 3:10 of the third period as he re-directed a pass by Osmanski to make it 4-2 but the Komets scored four times in the next 6:10 to complete their comeback.

MAKING TRACKS_This long homestand continues with another 3 in 3 next weekend. The Kalamazoo Wings provide the opposition for all three games. It will be the first time the Railers have played that franchise. … The Boudreau family has a 12-14-7 coaching record at the DCU Center. Bruce Boudreau coached here against the IceCats and Sharks with Lowell, Manchester and Hershey. Son Ben is 1-1-0 with Fort Wayne. … With the season about half over, Repaci is the Railers leader in Three Stars points, with 30. Appleby is second with 24, Lavallee-Smotherman third with 11. … The Railers have gone more than a full season’s worth of games since recording a shutout. Evan Buitenhuis blanked Brampton, 2-0, at Brampton on Dec. 4, 2018. That was 76 games ago. Worcester’s last home shutout was by Mitch Gillam on March 18, 2018. It was a 5-0 victory over Adirondack. … A note from Saturday night — Will Cullen’s two-goal performance was just the third ever by a Railers defenseman. Patrick McNally and Ivan Chukarov also did it. No Worcester defenseman on any team has ever recorded a hat trick. … Appleby, who faced 47 shots Sunday, appeared in his 200th professional game.

February 3 in 3 Weekend
Scroll to top