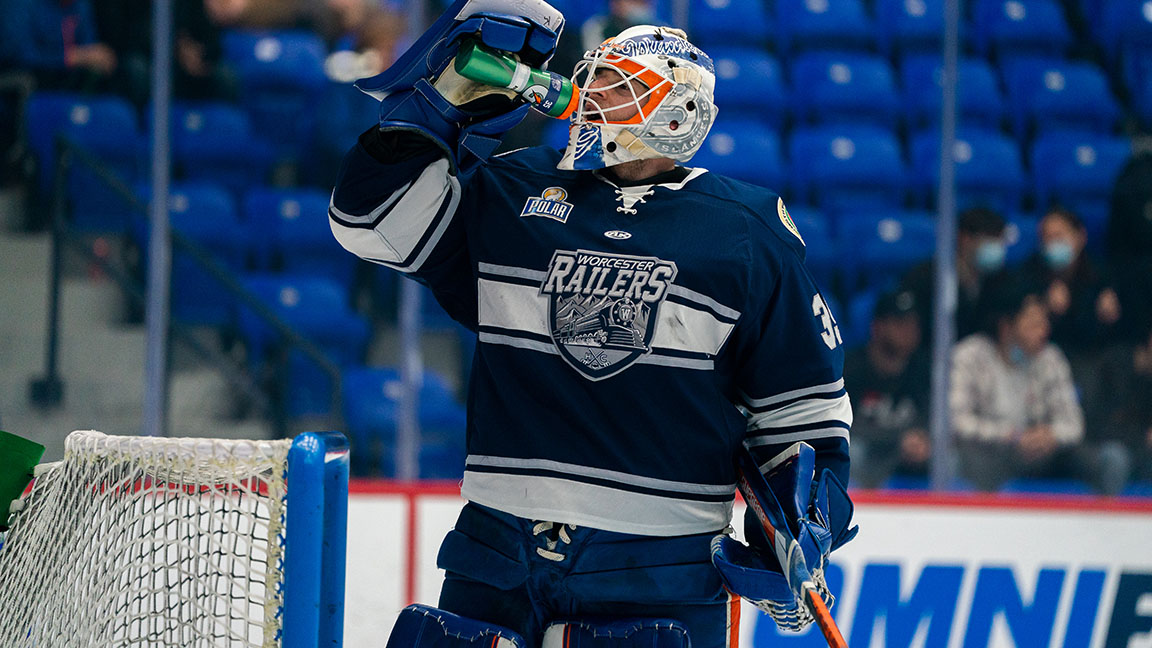 Meeting 8 of 10 vs. Trois-Rivières this season

It was a record setting night for Jordan Lavallee-Smotherman (2-0-2), who became the first player to reach the thirty-goal plateau in Railers history. He was able to net one midway through the first, as both teams went quiet in the second. Blake Christensen (1-0-1) opened up the third with a goal in his first game back in seven games for Worcester, which was his team leading fifth against the Lions this season. Lavallee-Smotherman wrapped things up with an empty netter late in the third to help Worcester to come away with the 3-0 win over Trois-Rivières. Ken Appleby was spectacular in net all night long for Worcester, recording 43 saves for his first shutout of the season.

The captain for the Railers, Jordan Lavalle-Smotherman (29th) would set a franchise record for most goals scored by a member of the Railers in a single season at 29 to put Worcester up 1-0. Smotherman received a cross-ice feed from Bobby Butler and wristed one past Arturs Silovs for the tally with 7:53 left in the first. Worcester would receive a look at the man-advantage with 6:27 left in the first, but couldn’t capitalize, as their struggles on the power-play continued.Anthony Repaci went down with an injury late in the first period, and after attempting a few shifts early in the second, would not return to action for the Railers for the rest of the night. Trois-Rivières outshot Worcester in the first 14-10.

It would be a very quiet second period, as neither team managed to get on the board in the middle frame. Trois-Rivières did get the one power-play in the period, but Ken Appleby and the Railers were able to turn the Lions aside to preserve their 1-0 lead. Trois-Rivières continued to outshoot Worcester, holding a 10-5 lead in shots upon the end of the period. The Lions were now outshooting the Railers 24-15 on the game.

Blake Christensen (18th), back off of the injury reserve for his first game in seven contests for the Railers would find the back of the net to extend Worcester’s lead to 2-0. Max Newton would find Christensen low along the near goal line, as Christensen then found some space beneath the pads of Arturs Silovs for the marker. It was Christensen’s team leading fifth goal of the season against the Lions. With the goalie pulled, Jordan Lavallee-Smotherman (30th) wristed a puck down the length of the ice and nailed the empty net to secure the victory for the Railers on Wednesday night, 3-0. Ken Appleby stood on his head all night long for the Railers, as he was able to stifle the Lions for all 60 minutes, making 43 saves in the shutout effort. Trois-Rivières outshot Worcester 19-5 in the third, and 43-20 on the game.