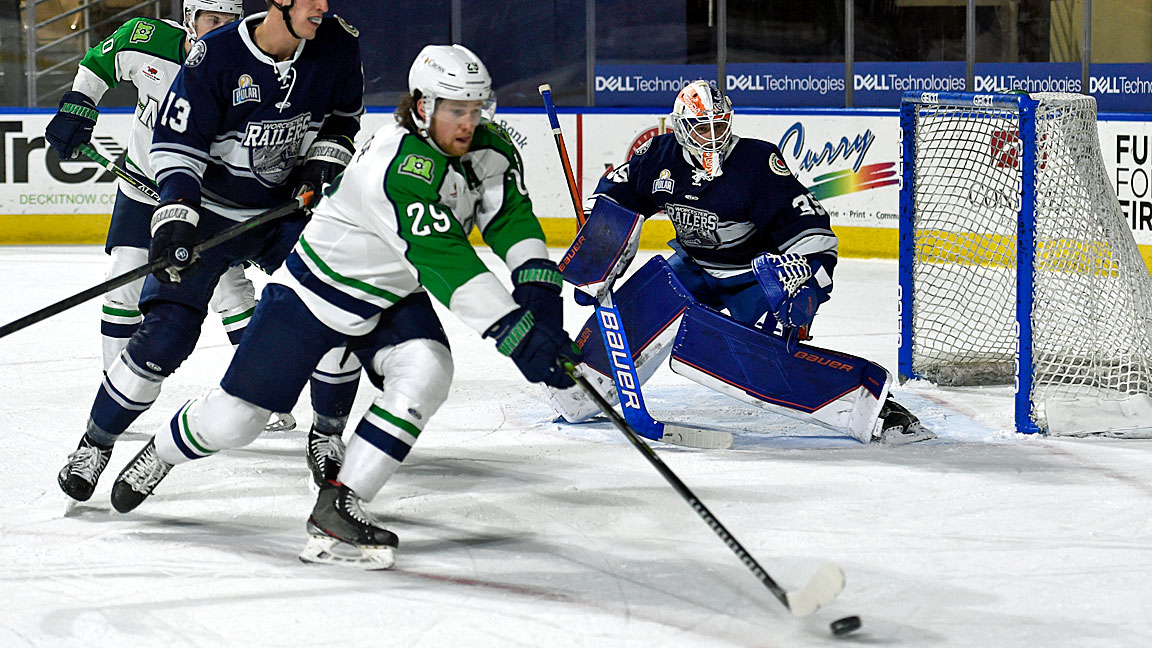 This is the thing about goaltending.

If it’s good, you don’t always win but if it’s bad you almost always lose.

The Railers got some of the good stuff from Ken Appleby Wednesday night and beat the Maine Mariners, 4-2. Appleby, just back from Bridgeport, stopped 37 shots on the night he was named an ECHL All-Star.

Goalies get blamed for everything. It is part of the job description. However, the Railers’ numbers this season say a lot about the position. Worcester is 8-9-1 when either Appleby or Colten Ellis is in net. The Railers are 2-6-0 otherwise.

“He shouldn’t be in this league,” Railers forward Anthony Repaci said, “but it’s fortunate for us that he’s here.”

The Railers’ opponent was supposed to be Trois-Rivieres. To make a very long story as short as possible, Covid got in the way and the Mariners filled in, which worked out pretty well after all.

Worcester played the game without five of its top six scorers, however, due to viruses, callups and suspension. Jordan Lavallee-Smotherman and Liam Coughlin are on the Commisioner’s Exempt List. Ross Olsson is suspended. Drew Callin and Jacob Hayhurst are in the American Hockey League.

That left Repaci as the Railers’ active leading scorer and he stepped up nicely with a goal and an assist. Brent Beaudoin and Nolan Vesey were also 1-1-2. Will Cullen had the other Worcester goal.

Cameron Askew and Pascal Laberge scored for the Mariners, both on the power play. Their goals, less than a minute apart with about seven minutes left in the game, turned Worcester’s 3-0 lead into a near disaster. Maine had another power play in the final minutes as the Railers were caught with a brutal too-many-men penalty but Vesey hit an open net to secure the triumph.

Beaudoin put Worcester ahead exactly five minutes after the opening faceoff, scoring his fifth of the season. Vesey took advantage of a Maine turnover and fired a shot at Callum Booth from the right circle. Beaudoin snapped the rebound home.

Nobody scored again for almost a half-hour and when somebody finally did it was Cullen with his second in eight games for Worcester. Repaci set things up with some diligent work in the offensive zone and Cullen made it pay off with a backhander from about 10 feet out at 14:20.

Tommy Besinger had the other assist for his first point in a Worcester uniform.

“It was a 50-50 puck,” Repaci said, “and it was just a matter of wanting it a little bit more. I was tied up and I could see we had guys at the net so I was trying to do to get the puck to the net.

“It was a good thing that (Cullen) was able to come in and bang that one home.”

Repaci got his seventh of the season, the game winner, at 5:31 of the third period. Cole Coskey fed him from the left corner and he beat Booth from the slot.

MAKING TRACKS_Appleby is the fourth Railer to earn All-Star recognition. He joins Woody Hudson, Mitch Gillam and Jordan Samuels-Thomas in chronological order. The game is being played in Jacksonville on Jan. 17 with the Railers scheduled to play in Reading that night. … Laura Schmidlein made her second appearance of the season here working the lines but had to leave the game in the second period when she got a skate caught in the ice and twisted something in her leg…. Worcester’s next scheduled game is here Friday night versus Reading. The Royals are also on the docket for Saturday night. … Luke Peressini out of Ryerson University was Appleby’s backup. Including backups who have not played, the Railers have dressed 12 different goaltenders this season. …… Connor Doherty was back in action for Maine. So was Zach Malatesta, who started the season with the Railers and played well but was traded to Indy as compensation for Nic Pierog’s rights. Malatesta had two assists for Portland Wednesday night. … Attendance was 2,103. … The victory was the 100th in Railers history. … On a personal note, Wednesday was this reporter’s birthday and the Railers are 4-0 all-time on Jan. 12.