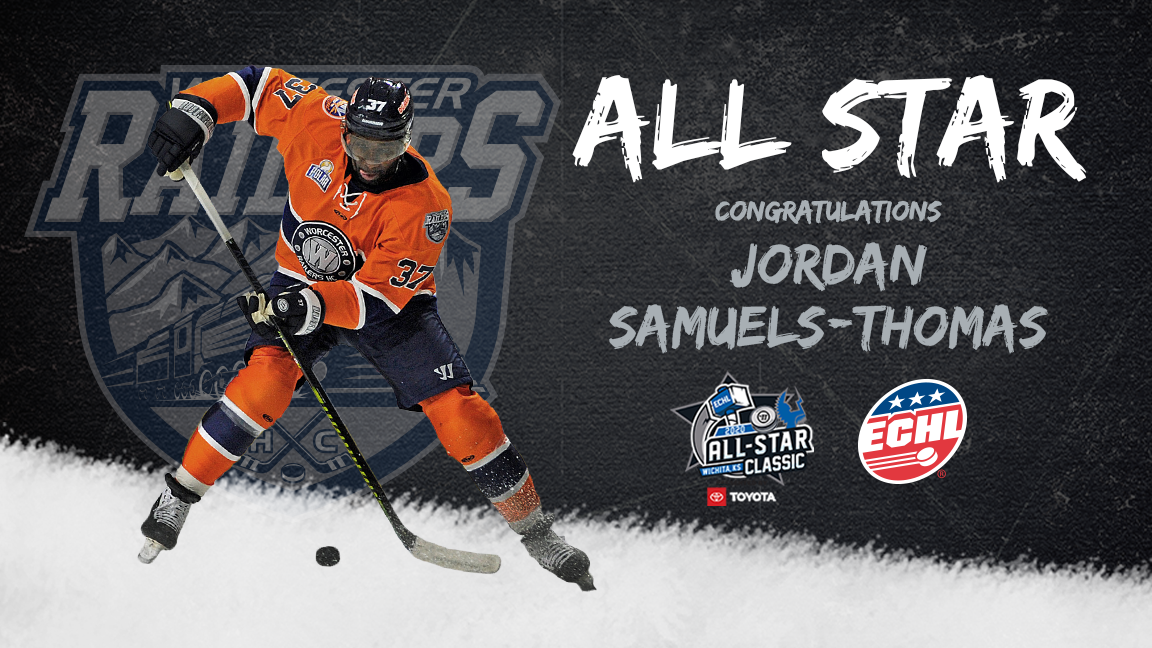 Worcester MA –  The Worcester Railers Hockey Club (@RailersHC), proud ECHL (@ECHL) affiliate of the New York Islanders (@NYIslanders) along with the ECHL has announced today that Railers’ forward Jordan Samuels-Thomas (@SamuelsThomas42) has been selected to the 2020 Warrior/ECHL All-Star Classic roster.

The sixth year pro is in his first season with the Railers and currently leads the club in points with 29 (11-18-29). The native of West Hartford, CT is tied for the team lead with eight must-point games which included a team high five game point streak from Nov. 29-Dec. 7 where he scored five goals and five assists.

The ECHL on Monday announced the rosters for the 2020 Warrior/ECHL All-Star Classic presented by Toyota, to be hosted by the Wichita Thunder on Wednesday, Jan. 22 at 7 p.m. CT at INTRUST Bank Arena. The game will air LIVE exclusively on NHL Network.

Following the format established last season, the Warrior/ECHL All-Star Classic presented by Toyota will feature a 3-on-3 tournament with four teams competing for the top spot. The host Wichita Thunder will make up two of the four teams and face-off against the other two teams made up of All-Star players from the Eastern and Western Conference. These four teams will compete in a 3-on-3 tournament with rally scoring in order to crown a winner. The 2020 Kansas Star Casino/ECHL All-Star Skills Competition will take place in between rounds of the tournament, with results counting towards the cumulative score.

There have been 68 players from the ECHL All-Star Game have gone on to play in the National Hockey League, including 52 since 2002 when the lineups began having players who coaches felt were prospects to move up to a higher level.

The rosters for the Eastern Conference and Western Conference All-Stars were determined in a vote of coaches, team captains, media relations directors, broadcasters and members of the media.

The Wichita Thunder will host a draft party on Wednesday where the team will be split into Team Bolts and Team Hammers for the All-Star Classic.

In partnership with the Professional Women’s Hockey Players Association, four members of the U.S. Women’s Ice Hockey Team will participate in the All-Star Classic as part of the PWHPA’s barnstorming “Dream Gap Tour” that is visiting several cities in Canada and the United States.

Taking part in the All-Star festivities will be three members of the 2018 U.S. Olympic Gold Medal squad – Dani Cameranesi, Kali Flanagan and Gigi Marvin – along with 3-Time World Champion Annie Pankowski. Each player will be assigned to one of the four All-Star Classic teams, as well as participating in the Kansas Star Casino/ECHL All-Star Skills Competition.

The 13th class of the ECHL Hall of Fame will be officially inducted at a banquet, presented by BFL CANADA and Sutton Special Risk, on Tuesday, January 21 at 5:30 p.m. at the Drury Plaza Hotel Broadview, the Official Host Hotel of the 2020 Warrior/ECHL All-Star Classic presented by Toyota.

For more information on the 2020 Warrior/ECHL All-Star Classic presented by Toyota and to purchase tickets, please visit www.echlallstarclassic.com.

Began in 1988-89 with five teams in four states, the ECHL has grown into a coast-to-coast league with 26 teams in 19 states and two Canadian provinces for its 32nd season in 2019-20. There have been 670 players who have gone on to play in the National Hockey League after playing in the ECHL, including eight who have made their NHL debuts in the 2019-20 season. The ECHL has affiliations with 25 of the 31 NHL teams in 2019-20, marking the 23rd consecutive season that the league had affiliations with at least 20 teams in the NHL. Further information on the ECHL is available at ECHL.com as well as on Twitter and Facebook.