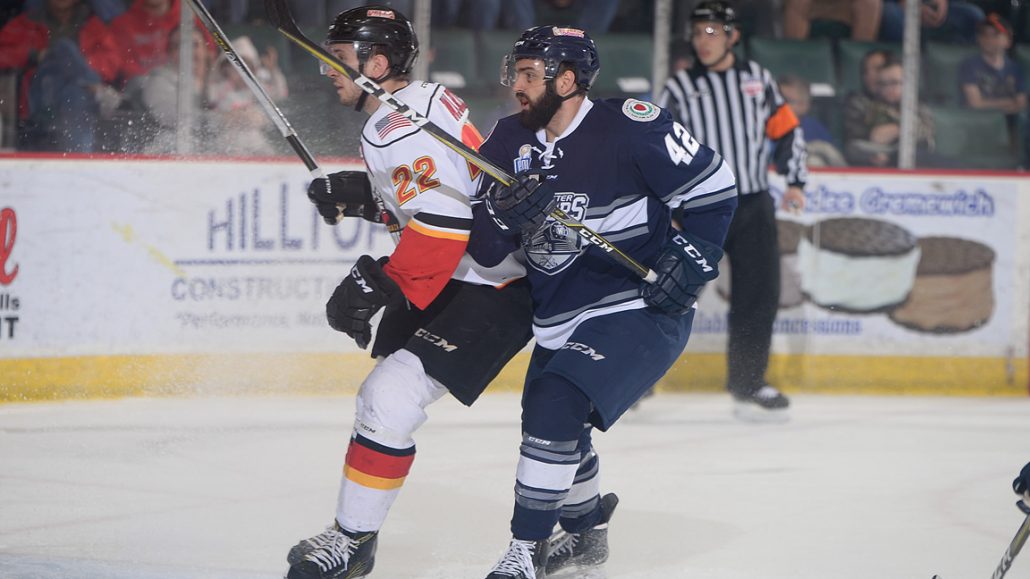 Game 5 of the Best of Seven North Division Semifinals

Glens Falls, NY – The Worcester Railers HC (2-3) forced a Game 6 in the best of seven North Division Semifinals after an amazing come-from-behind 6-5 victory in Game 5 over the host Adirondack Thunder (3-2) in front of 3,609 fans at the Cool Insuring Arena on Saturday evening. Game 6 will take place on Monday, April 23 at the DCU Center in Worcester at 7pm.

Nick Saracino (3-1-4) netted the first ever Railers hattrick, Josh Holmstrom (1-2-3), Matty Gaudreau, and Matt Lane (1-1-2) scored for Worcester while Eamon McAdam made 18 saves in net for the Railers in relief as the Railers came back from a 4-1 deficit for the win.  Justin Hamonic and Connor Doherty each finished +4 as Worcester scored five of the game’s final six goals for the wild road victory.

A wild first period saw four goals, an injured goalie, and a 3-1 Thunder lead through 20 minutes of play.  Josh Holmstrom (1st) gave the Railers an early 1-0 lead just 35 seconds in with a quick shot from in front that beat netminder Mackenzie Blackwood after a nice pass from behind the net by Nick Saracino.  Just before the two-minute mark, Kellen Jones was taken down from behind and crashed into MacKenzie Blackwood who then left the game injured and was replaced by backup Olivier Mantha.  Adirondack would then score the next three goals as Ryan Schmlezer (3rd) struck on the power play at 6:62 to tie the score at 1-1 and Mike Bergin (1st) buried a point-blank shot at 7:55 to give the Thunder a 2-1 lead. Shane Conacher (1st) gave the Thunder a 3-1 lead after he deflected a puck in the crease past Mitch Gillam on the power play at 12:14. Shots were 10-7 in favor of the Thunder through 20 minutes of play.

Adirondack went ahead 4-1 at 5:49 as Tim Harrison (2nd) fired a point-blank shot after a turnover behind the Railers net which would end the night for Mitch Gillam.  Worcester would then net the next three goals as Nick Saracino (1st) got the rally going at 6:58 followed by a power play goal by Matty Gaudreau (1st) at 11:55 past Olivier Mantha.  The Railers would tie the score at 12:55 as Matt Lane (1st) found the back net assisted by Woody Hudson.  Shots were 13-8 in the second period in favor of Worcester as the two teams headed to the intermission tied 4-4.

The Thunder went back ahead just 19 seconds into the third period as Brian Ward (4th) deflected a Mathieu Brodeur shot from the point. Worcester would tie the score at 5-5 as Nick Saracino (2nd) scored from an impossible angle with a rush down the left-wing side at 3:32. Nick Saracino (3rd) would net the hattrick and eventual game winner at 14:02 with a quick shot from the right side on the power play.  Eamon McAdam made 14 third period saves as the Railers held on for the crazy 6-5 road victory.

Notes: Three Stars: 3rd star: Brian Ward (Goal) 2nd star: Josh Holmstrom (1-2-3) 1st star: Nick Saracino (3-1-4) …Final shots were 33-26 in favor of Adirondack…Mackenzie Blackwood (3-1-0-0) made 0 saves on 1 shot for Adirondack before he was injured at the 1:39 mark of the first period… Olivier Mantha (0-1-0-0) was the backup for the Thunder but made 20 saves in relief and picked up the loss…. Mitch Gillam (1-1-0-0) made 10 saves on 14 shots in net for Worcester…. Eamon McAdam (1-2-0-0) was the backup goaltender for the Railers but picked up the win with 18 saves…. Worcester went 2-for-4 on the power play while Adirondack went 2-for-4…Chris Langkow (inj), Frankie DiChiara, Jake Randolph, TJ Syner, and Mike Cornell (inj) did not dress for Worcester…. Worcester had scored just four goals in the first four games of the series before scoring six goals in Game 5…. the two teams combined for 10 goals (scored on a goalies) in the first four games before combining for 11 goals in Game 5.

The Worcester Railers (4thseed) trail the Adirondack Thunder (1stseed) 2-3 in the first round of the Kelly Cup playoffs presented by Energy Monster.  The first round is a best of seven series and will follow a 1-2-2-1-1 format.  Complete schedule below:

Tickets are on sale now through the DCU Center Box Office, online via ticketmaster.com, or by calling 508-365-1750. Worcester Railers HC members may purchase their season tickets for the playoffs by clicking HERE.

The Worcester Railers were 16 points behind the Wheeling Nailers on January 25 and were in 6thplace in the North Division.  The Railers have posted a 22-8-1-2 record since, which included a 15-3-1-0 record at the DCU Center.  Worcester was 11-2-1 in their last 14 games overall outscoring their opponents 34-20. The Railers went 8-2-2-0 vs. the Adirondack Thunder during the regular season which includes a 5-1-1-0 record at the Cool Insuring Arena.

RAILERS TO HOST GAME 6 ON MONDAY AT DCU CENTER! Railers season comes to end after Game 6 loss on home ice to Thunder
Scroll to top