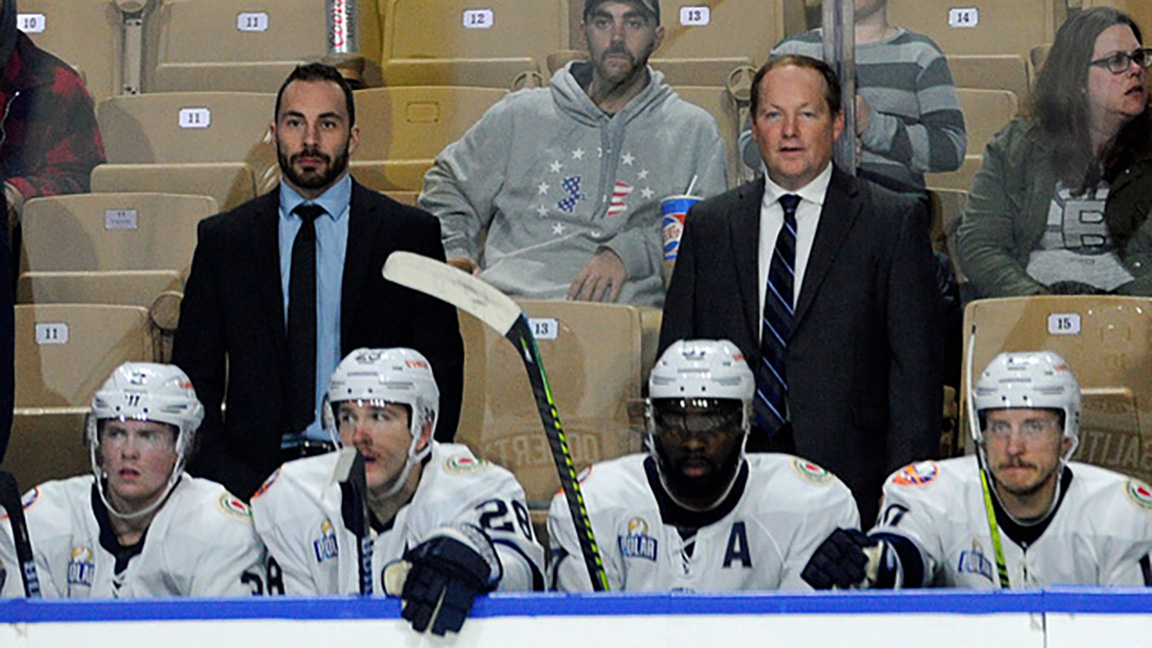 Meeting 2 of 9 vs. Newfoundland this season

Worcester, MA– The Worcester Railers HC (4-11-1-0, 9pts) dropped their seventh straight game in a 4-1 loss to the Newfoundland Growlers (12-7-0-0, 24pts) on Wednesday night in front of 2,004 fans at the DCU Center on David Cunniff’s Railers coaching debut. The Railers will be back in action Friday, Nov 26 hosting the Newfoundland Growlers at 7pm on Country Night presented by 98.9 NASH Icon.

Matt Schmalz scored the only goal while Jakub Skarek made 24 saves in net for Worcester. The Growlers were led by their goaltender Maksim Zhukov who made 30 saves in net for his sixth win of the year as the Growlers improved to 12-7 on the year.. Colt Conrad (0-2-2) and Joseph Duszak (0-2-2) each recorded two assists while Brady Ferguson is now tied for the team lead with nine goals after his third period score.

The Railers came out with a lot of hustle in the first period but the Growlers attacked on an odd man rush which set up Trey Bradley (3rd) in the high slot who snapped one past Jakub Skarek to give the Growlers a 1-0 lead at 13:43. Each team had one power-play but neither team was able to convert as Newfoundland headed into the dressing room with a 1-0 lead through 20 minutes of play. The Railers outshot the Growlers 14-10 in the opening stanza.

Just like the first period Newfoundland would score the only goal of the period in the second frame when Giorgio Estephan (7th) flipped a shot past the left shoulder of Jakub Skarek from below the right circle on a pass from the high slot from Joseph Duszak. Worcester held a slight edge in shots 22-19 through 40 minutes of play.

Brady Ferguson (9th) gave the Growlers a 3-0 lead at 9:07 sending one past Jakub Skarek. The Railers would finally stike as Matt Schmalz (5th) with an individual effort shielding it away on his back hand from the right circle and followed up his rebound to smack it home just 14 seconds after the Ferguson strike. Evan Neugold (2nd) cut his way in front of the cage and fired one home giving back the Growlers a 4-1 lead. The Railers outshot the Growlers 31-28 but fell 4-1.

Notes: Three Stars: 3rd star…. Matt Schmalz (1-0-1) 2nd star: Maksim Zhukov (30 saves, Win) 1st star: Joseph Duszak (0-2-2) …. final shots were 31-28 in favor of Worcester…. Maksim Zhukov (6-6-0) made 30 saves on 31 shots for Newfoundland.… Jakub Skarek (2-4-1) made 24 saves on 24 shots for Worcester while Evan Buitenhuis served as the backup …. Worcester went 0-for-3 on the power play while Newfoundland went 0-for-5…. Kyle McKenzie (inj), Anthony Florentino (inj), Barry Almeida (inj), Tanner Pond (inj), Shane Walsh (inj), Zack Phillips (inj) Ross Olsson, and Jack Stander did not dress for Worcester…. Barry Almeida served as assistant coach…. Matt Schmalz has goals in back to back games and is now tied for the team lead with five….Linus Soderstrom is currently on recall with the Bridgeport Sound Tigers…. Worcester is now 3-7-0-0 all-time vs. the Growlers and 2-4-0-0 at the DCU Center.