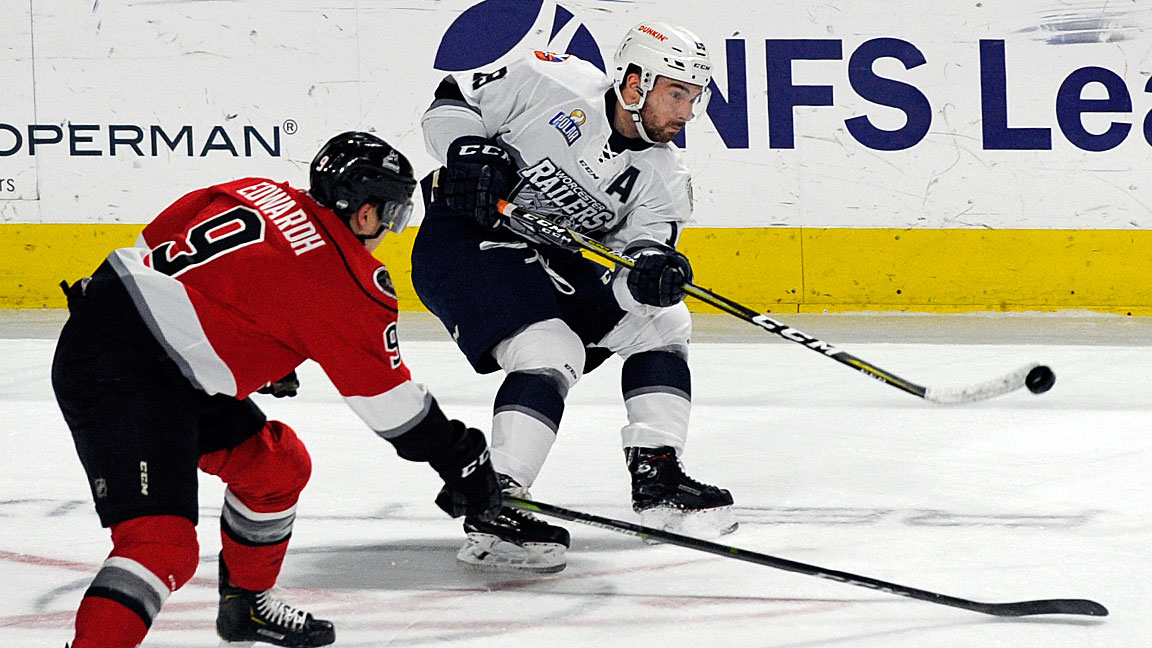 Meeting 9 of 11 vs. Adirondack this season

Mitch Gillam picks up first shutout of season with 38 saves

Glens Falls, NY – The Worcester Railers HC (26-22-5-4, 61pts)extended their point streak to four games (3-0-1-0) after a commanding 5-0 win over the host Adirondack Thunder(31-21-5-2, 69pts) in front of 2,109 fans at the Cool Insuring Arena anon Wednesday evening. With the win, the Railers are now threepoints behind the Manchester Monarchs (64pts) for the 4thspot in the North Division with two games in hand. The Railers and the Thunder battle again in Glens Falls, NY on Friday at 7pm.

Barry Almeida (2-0-2), Ryan Hitchcock (1-1-2) Tommy Kelley, and Nick Sorkin all scored for Worcester while Mitch Gillam made 38 saves in net for his 17th win and first shutout of the season. Logan Thompson made 24 saves in net for the Thunder as the Railers improved to four games over .500 for the first time this season. It was the fourth straight win for Worcester over Adirondack overall and now 5-4-0-0 vs. their North Division rivals.

Mitch Gillam was very sharp in the first period turning away 12 total shots in the opening 20 minutes.  Worcester would score the only goal at 14:14 as Ryan Hitchcock sent a diagonal pass from inside the blue line down low to Barry Almeida (17th) who then ripped a quick shot top self at 14:14 past netminder Logan Thompson to give the Railers a 1-0 lead into the first intermission.

Worcester exploded for three goals in the second period to grab a 4-0 lead through two periods of play.  Barry Almeida (18th) stole the puck in front of the Thunder net and stickhandled around the netminder at 8:57 to give Worcester a 2-0 lead.  Ryan Hitchcock (12th) stole the puck at center ice and barreled down the right wing around a defender and sent a backhander top shelf at 15:01 to put the Railers ahead 3-0.  Tommy Kelley (3rd) followed in a Matty Gaudreau rush at 16:56 to put Worcester up 4-0 through 40 minutes.  Shots were 29-22 for the Thunder after two periods as Gilly stood tall.

Yanick Turcotte (13th FM) took care of Alexandre Carrier at 2:08 of the third period with a quick scrap for the only real fireworks in a feisty hockey game.  Nick Sorkin (13th) netted the Railers 5th goal of the game at 19:20 after a nice feed from Josh Holmstrom as the Railers took away the 5-0 road victory.

Notes: Three Stars: 3rd star: Ryan Hitchcock (1-1-2, +3) 2nd star: Barry Almeida (2-0-2, +3) 1st star: Mitch Gillam (38 saves, Win) …. final shots were 38-29 in favor of Adirondack….Logan Thompson (1-2-0) made 24 saves on 29 shots for Adirondack…. Mitch Gillam (17-13-4) made 38 saves on 39 shots for Worcester for his first shutout of the season….while Evan Buitenhuis served as the backup…. Worcester went 0-for-1 on the power play while Adirondack went 0-for-1…. Kyle McKenzie (inj), Matt Schmalz (inj), Tommy Panico (inj), Alex Vanier (inj), Tyler Mueller, Ross Olsson, and Blake Wojtala did not dress for Worcester…. Goaltender Blake Wojtala (Salve Regina Univ) was signed by the Railers earlier in the day and did not dress…..Ivan Kosorenkov was recalled by the SJ Barracuda (AHL) before the game and his rights were traded to Orlando (ECHL) for future consideration…..Jeff Kubiak is on recall with the Bridgeport Sound Tigers…. Ryan Hitchcock, Tyler Barnes, Ryan MacKinnon, Ivan Chukarov, Matty Gaudreau, and Josh Holmstom added assists for Worcester…. the Railers are now 12-14-1-3 on the road this season – it was the 8throad game in last nine games overall for the Railers….Ryan Hitchcock now has 26 points (11-15-26) in his last 20 games and is on a four game point streak (2-4-6)….Nick Sorkin (3-3-6) and  Matty Gaudreau (2-5-7) both have five-game point streaks… the Railers have 15 games remaining (9 home, 6 road)…Barry Almeida added three shots on goal and now has 218 shots on goal this season – 3rd in the ECHL….it is the first time the Railers have been four games over .500 this season….Rob Powers finished +3 for Worcester…Tommy Kelly has scored in back-to-back games.

What’s on tap – the series continues….

The Railers and the Thunder battle again in Glens Falls, NY on Friday at 7pm to close out the three-game set. Coverage begins at 6:36pm on 98.9 Nash Icon.

On Saturday, March 9 the Railers host the Norfolk Admirals at 7pm on a BIG GAME SATURDAY! The Stanley Cup® will appear from 6-8:30pm in the DCU Center concourse presented by Mercantile Center.   Fans will have an opportunity to take their photo with the Stanley Cup during the game.  The Railers will be a wearing a special Nickelodeon themed Ninja Turtles jersey presented by the Worcester Credit Union. Every Saturday night home game is SATURDAY NIGHT SIGNINGS presented by MidState Auto Group with a Railers player signing autographs during the first intermission.