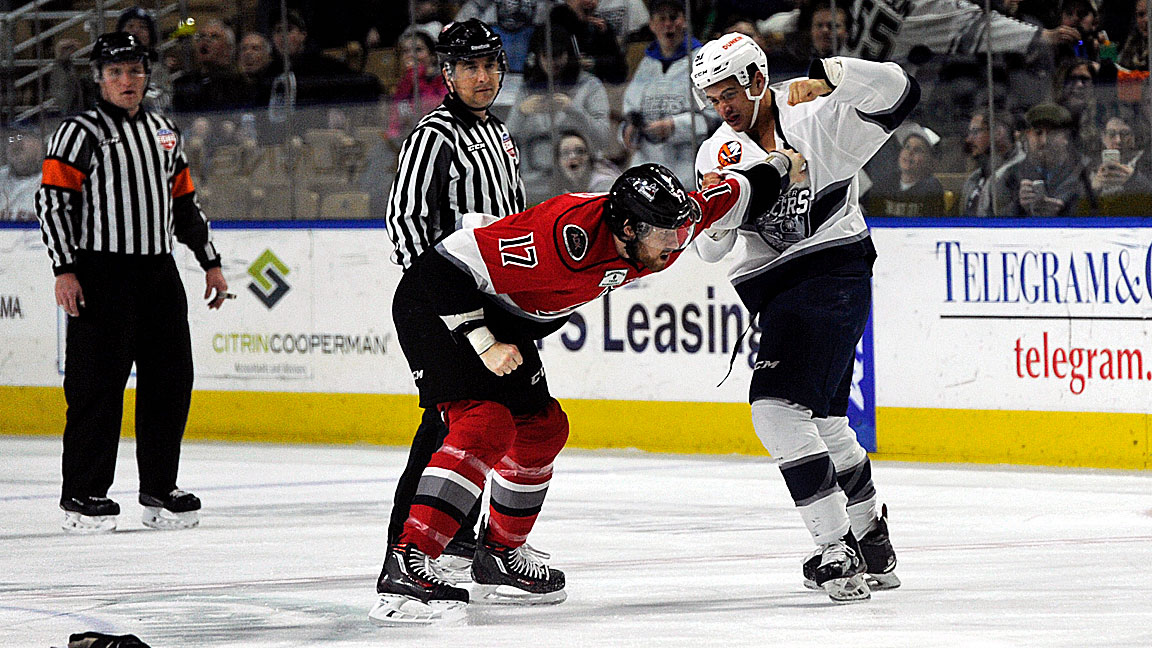 Meeting 7 of 11 vs. Adirondack this season

Yanick Turcotte, Woody Hudson, Ryan Hitchcock (2-1-3), and Barry Almeida (1-1-2) all scored for Worcester while Mitch Gillam made 27 saves in net for the Railers in his 12th win of the season.  Dylan Willick added two assists and Yanick Turcotte was an assist away from the Gordie Howe hattrick as the Railers improved to 12-7-3-1 on home ice.  Ryan Hitchcock was +3 as he also added an assist for a three-point night as nine different players picked up points as the Railers won for the 6th time in their last seven games.

The Railers scored four goals in the first nine minutes of the first period to grab a commanding 4-0 advantage.  Kevin Hitchcock (4th) scored on the first shot of the game on a breakaway score on goaltender Evan Cormier just 44 seconds into the game before Yanick Turcotte (1st) snapped a quick shot from the right wall from 45 feet at 4:31 to give the Railers a 2-0 edge.  Turcotte (6th FM) dropped the mitts on the ensuing faceoff against Alexandre Carrier (3rd FM) in a long fight at center ice as the action continued.  Barry Almeida (12th) struck again for Worcester at 5:07 before Woody Hudson (5th) jammed home a center feed by Dylan Willick at 8:54 which would end the net for netminder Evan Cormier.  There would be no scoring the rest of the period as Worcester held an 11-8 shot advantage through 20 minutes of play.

Adirondack turned the pressure on in the second period and got on the board on the power play as John Edwardh (14th) snapped a quick shot through a screen from the left circle past Mitch Gillam at 8:59 to cut the Railers lead to 4-1.  Each team had nine shots in the middle frame as Worcester took a 4-1 lead into the second intermission.

Ryan Hitchcock (5th) scored his second of the night to put the game away with a swing-a-rama-shot from behind the goal line at 11:25 of the third period to put Worcester ahead 5-1.  Mitch Gillam made 10 more saves to keep the Thunder at bay as the Railers grabbed the impressive 5-1 home win.

Notes: Three Stars: 3rd star: Dylan Willick (0-2-2) 2nd star: Yanick Turcotte (Goal, Fight) 1st star: Ryan Hitchcock (2-1-3, +3) …. final shots were 31-28 in favor of Worcester…. Evan Cormier (0-2-0) made 3 saves on 7 shots for Adirondack in just 8:54 before Alex Sakellaropoulos made 23 saves in relief.…. Mitch Gillam (12-10-1) made 27 saves on 28 shots for Worcester…. while Evan Buitenhuis served as the backup…. Worcester went 0-for-1 on the power play while Adirondack went 1-for-2…. Kyle McKenzie (inj), Tommy Kelly, Bo Brauer, Alex Vanier (inj), Tyler Mueller (inj), and Malcolm Gould (inj) did not dress for Worcester…. Jeff Kubiak is on recall with the Bridgeport Sound Tigers…Matty Gaudreau returned to the lineup after he was loaned back from the Sound Tigers and was +1…before the game the Railers signed defenseman Kevin Hart….the Railers are now 11-6-2-0 all-time vs the Thunder…Worcester is now 0-20 on the powerplay vs. the Thunder but 19-21 on the penalty kill….the Railers are now 12-7-3-1 on home ice this season….the Railers scored a record four goals in a span of 8:10 of the first period….Barry Almeida has a two game point streak (2-1-3)…. Ivan Kosorenkov now has a three game point streak (1-2-3)….Mike Cornell added an assist and finished +3….the four goals in the first period were the most scored in any period this season….the five goals tied a season high… Turcotte fired a game high five shots on net…Connor Doherty finished +3.

On Sunday, Jan 27 the Railers begin a four-game road trip with a 3pm start in Manchester vs. the Monarchs. Coverage begins at 2:35pm on 98.9 Nash Icon.

Railers kick-off second half of season with gritty 4-2 road win in Adironda...