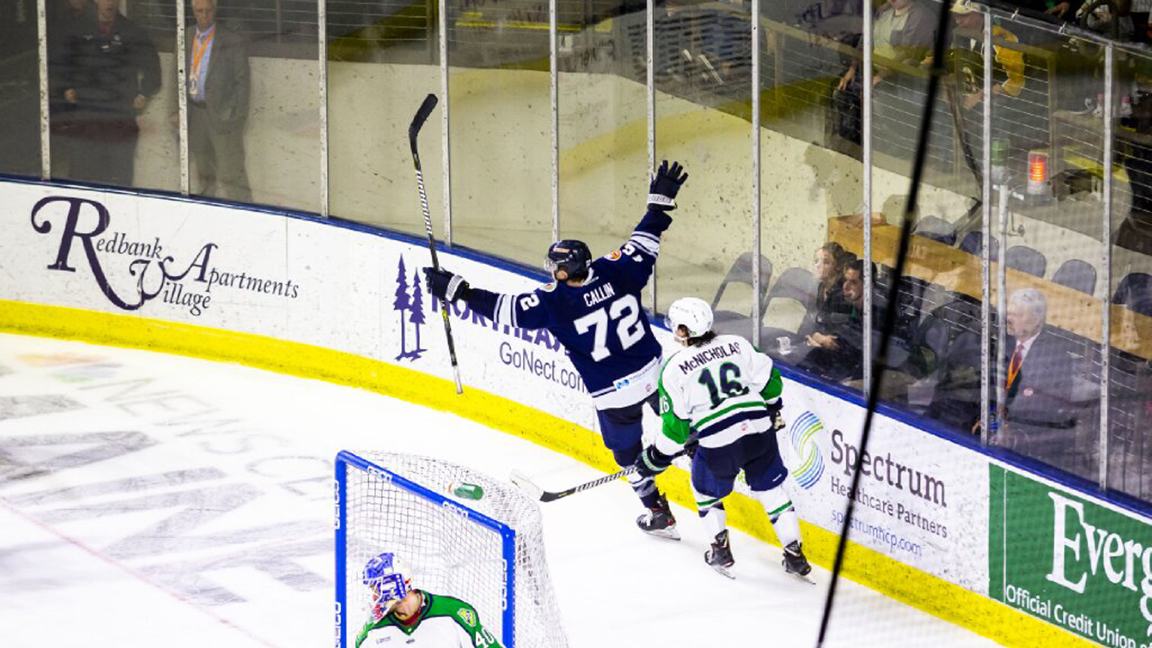 Railers score three unanswered goals for come from behind win

Portland, ME – The Worcester Railers HC (20-36-4-0, 44pts)scored three unanswered goals to take down the Maine Mariners (32-25-3-1, 68pts) 3-2 on Sunday afternoon in front of 2,732 at the Cross Insurance Arena on Sunday afternoon. The Railers travel to Glens Falls, NY on Tuesday, March 10thto take on the Adirondack Thunder at 7pm.

The Worcester Railers got three unanswered goals from Justin Murray (1-0-1), Tyler Poulsen (1-0-1), and the eventual overtime game winner at 4:27 by Drew Callin (1-0-1). Evan Buitenhuis made 30 saves in net for the victory while Connor LaCouvee made 28 saves in net for the loss while Matt Nuttle (1-0-1) and Dillan Fox (1-0-1) each scored goals for the Mariners.

Matt Nuttle (2nd) handed the Mariners a 1-0 advantage at 9:49 of the opening period finishing off a pretty passing play on a three on two effort with Connor Bleackley and Andrew Sturtz recording assists. The only penalty of the opening 20 minutes was assessed to the Railers with just 1:46 to go and with only 41 seconds left in the stanza Dillan Fox (23rd) was able to dance his way around the crease and tuck the puck behind the near left of Evan Buitenhuis to increase the Maine lead to 2-0. The Mariners led 2-0 through 20 minutes of play with shots all tied at 11-11.

Justin Murray (2nd) notched the lone goal of the second period with a blast from the top of the left circle zipping by the low glove of Connor LaCouvee at 10:09 with Ryan MacKinnon and Ross Olsson collecting assists. Maine led 2-1 through 40 minutes of play with shots in favor of the Mariners 24-20.

About midway through the third period after the Railers lost a defensive zone faceoff Tyler Poulsen (13th) blocked a shot at the point and went off to the races on a breakaway and beat Connor LaCouvee forehand backhand to tie the game at 2-2 at 11:44 of the third period. 60 minutes was not enough to provide a winner as the game was all square at 2-2 after regulation.

At 4:27 of overtime on an unbelievable individual effort circled the puck behind the cage and from the right circle with one hand on the stick roofed it over the near shoulder of Connor LaCouvee to hand Worcester a 3-2 road overtime victory.

Notes: Three Stars: 3rd star: Tyler Poulsen (1-0-1) 2nd star: Dillan Fox (1-0-1) 1st star: Drew Callin (1-0-2)…. final shots were 32-31 in favor of Maine …. Connor LaCouvee (20-13-3) made 28 saves on 31 shots for Maine…. Evan Buitenhuis (13-19-1) made 30 saves on 32 shots for Worcester while Ian Milosz served as the backup…. Worcester went 0-for-3 on the power play while Maine went 1-for-4…., JD Dudek (IR), Kyle Thomas (IR), Yanick Turcotte (IR), Tanner Pond (IR), Connor Doherty, and Mike Cornell (Personal) did not dress for Worcester…. Nic Pierog, Ben Thomson, Arnaud Durandeau, and Linus Soderstrom are all with the Bridgeport Sound Tigers…. Bo Brauer was traded to Rapid City on Thursday while Cody Payne was traded to Indy…. Justin Murray now has two goals on the season both of which have come in Portland…. Murray led all Worcester skaters with six shots on net…. Ryan MacKinnon, Ross Olsson, Myles McGurty, and Eddie Matsushima all recorded assists for Worcester…. Barry Almeida took a high hit at the end of the second period and did not return…. Shane Walsh left the game in the third period with an apparent injury…. Worcester is now 3-4 in overtime…. Worcester has 12 games left on the regular season seven of which are at the DCU Center…. The Railers are now 8-10-4-3 all-time vs. the Mariners and 2-7-2-2 at the Cross-Insurance Arena.