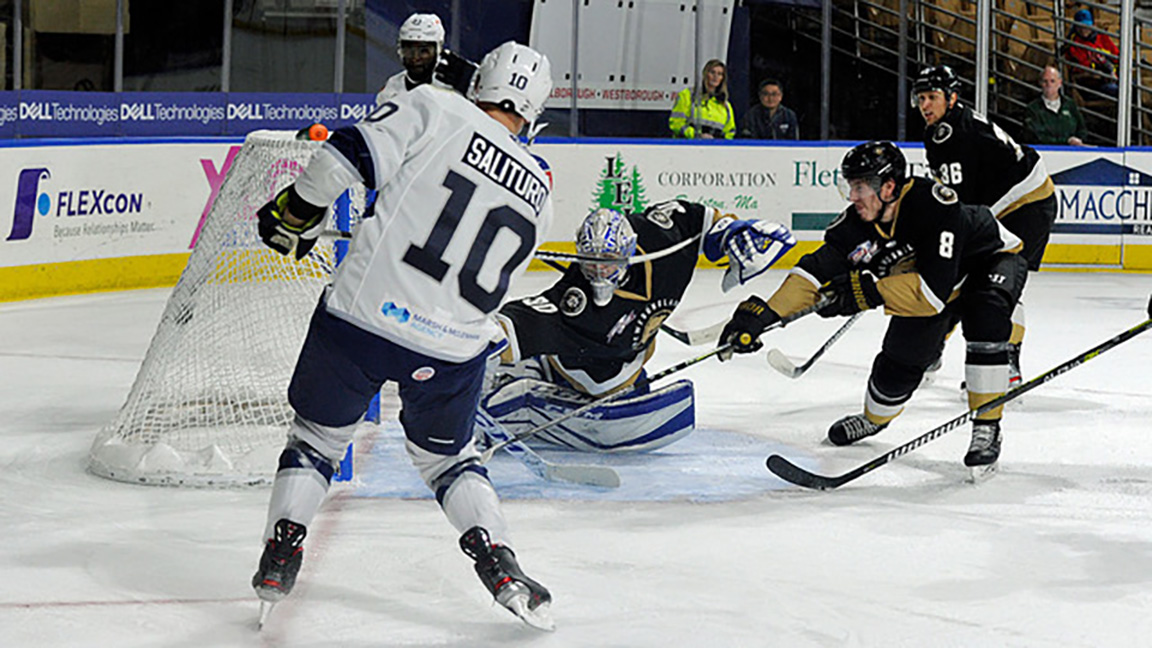 Meeting 3 of 9 vs. Newfoundland this season

Railers Win on Country Night at the DCU Center

Worcester, MA– The Worcester Railers HC (5-11-1-0, 11pts) snapped out of a seven game skid and picked up a 6-4 regulation home win over the Newfoundland Growlers (12-8-0-0, 24pts) on Friday night in front of 3,150 fans at the DCU Center on Friday night for Coach Cunniff’s first ECHL win as a head coach. The Railers will be back in action Saturday on Nov. 30 vs. the Indy Fuel on Nickelodeon Night at 7pm.

Dante Salituro (3-1-4) recorded the first regular season hat trick in Worcester Railers history while Jordan Samuels-Thomas (1-2-3), Nic Pierog (1-1-2), and Ross Olsson all found the back of the net for Worcester. Connor Doherty (0-2-2) recorded two assists and was named the number three star while Evan Buitenhuis made 23 saves for his first win at the DCU Center since Jan. 12, 2019. Evan Neugold, Riley Woods, Justin Brazeau, and Colt Conrad all scored goals for the Growlers while Maksim Zhukov made 16 saves in the loss as Worcester snapped a six game skid on home ice with the 6-4 win.

Dante Salituro (1st) scored his first goal as a Railer after receiving a pass from Jordan Samuels-Thomas on a five on three power-play at 14:59 giving Worcester a 1-0 lead. With under a minute to go in the frame Riley Woods (7th) sprung free down the right wing side and snapped one through the wickets of Evan Buitenhuis at 19:16. The score was all tied at 1-1 through 20 minutes of play with shots even at 10 a piece.

Newfoundland took a 2-1 lead just 30 seconds into the second period as Colt Conrad was able to fire one by Evan Buitenhuis from the left circle. The Railers matched a period high in goals with three during the middle frame started by Jordan-Samuels Thomas (6th) short-handed who went forehand backhand at the top of the crease. The play was started with a stretch pass from Connor Doherty up to Dante Salituro just inside the blue line who found a streak Jordan Samuels-Thomas to tie the game at 2-2 at 4:08. After the Growlers grabbed a 3-2 lead at 6:36, Dante Salituro (2nd) notched his second goal of the game as he was all alone and hammered one by the glove of Maksim Zhukov to tie the game at 3-3. Connor Doherty picked up his second point of the night when he whipped a shot toward the net which was redirected by Nic Pierog (4th) at 13:14 to give Worcester their second lead of the game. The Railers took a 4-3 lead into the dressing room after 40 minutes play and led in shots 19-16.

A puck free alone in the high slot at 3:45 of the third period allowed for Ross Olsson (3rd) to blast it past the glove of Maksim Zhukov to give the Railers 5-3 lead. With the goaltender pulled Justin Brazeau (8th) made things interesting as he found the back of the net from the top of the right circle beating Evan Buitenhuis low blocker making it a 5-4 game. To seal the deal for the Railers Dante Salituro (3rd) from 175 feet launched one in the back of the net giving Worcester a 6-4 win.

Notes: Three Stars: 3rd star…. Connor Doherty (0-2-2) 2nd star: Jordan Samuels-Thomas (1-2-3) 1st star: Dante Salituro (3-1-4) …. final shots were 27-22 in favor of Worcester…. Maksim Zhukov (6-7-0) made 16 saves on 21 shots for Newfoundland.… Evan Buitenhuis (2-4-0) made 23 saves on 27shots for Worcester while Tommy Nixon served as the backup …. Worcester went 1-for-4 on the power play while Newfoundland went 0-for-4…. Anthony Florentino (inj), Barry Almeida (inj), Tanner Pond (inj), Shane Walsh (inj), Drew Callin, Bo Brauer, Ivan Chukarov and Jack Stander did not dress for Worcester….  Dante Salituro recorded the first regular season hat trick in Worcrster Railers history…. Evan Buitenhuis recorded his first win at the DCU Center since Jan. 12, 2019….David Cunniff picked up his first win as an ECHL head coach…. Justin Murray tallied his first professional point with an assist…. Nic Periog led all skaters with five shots….. The Michael David Band performed before and during the game….  Jakub Skarek and Linus Soderstrom are currently on recall with the Bridgeport Sound Tigers…. Worcester is now 4-7-0-0 all-time vs. the Growlers and 3-4-0-0 at the DCU Center.

Growlers Prevail Over the Railers 4-1 in David Cunniff’s Railers Coaching...