Hey Worcester Railers fans! I am Jillian Witkowski the Community Development Coordinator for your Worcester Railers. Worcester has always had a special place in my heart and I am very excited to be a part of bringing hockey back to the city. Some say I “bleed Worcester” as I was born and raised right over airport hill in Leicester and I am a proud Worcester State University Alum. When I wasn’t on the field playing soccer or softball at school I spent my time interning for the Athletic Department under Athletic Director Michael Mudd (you may remember him from the Sharks!) which got me excited to work within the sports industry. I love to be involved in everything and anything where I can bring my high energy! I am excited to bring that energy with me into the Worcester Railers Community.

Although The Railers Hockey season starts October 2017, TRAX’s season begins NOW! TRAX and myself have been very busy getting the word out to the Central Mass Community that The Railers HC is here.

I’m excited to tell you where we’ve been, where we’re going, and all things community every Thursday…. Just call me Community Jill! 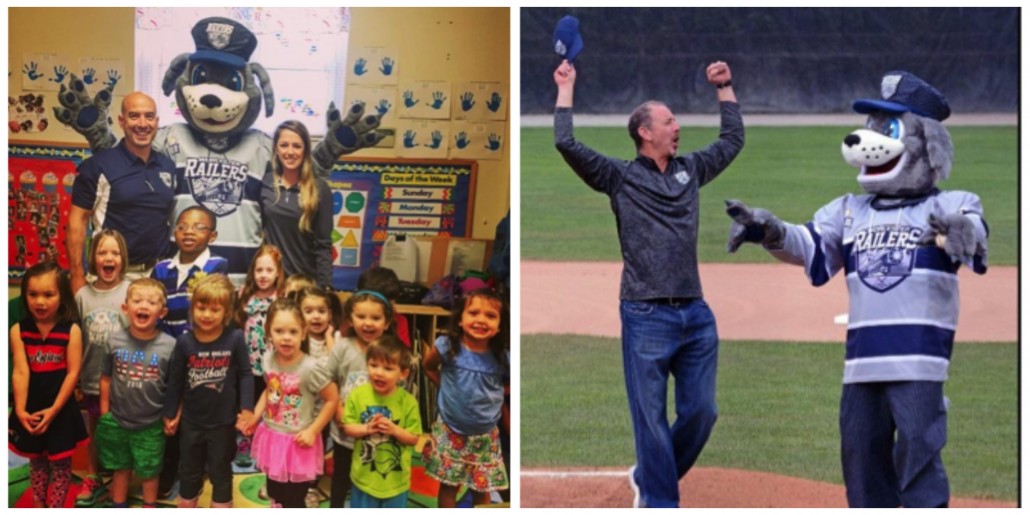 TRAX has already gotten his paws into a lot, starting with his big reveal at The Worcester Bravehearts game on July 30. Since then TRAX officially signed on with the team wearing lucky number 7!

On Friday, September 9, TRAX and I hopped on a golf cart at The Auburn Police Association Golf Classic in memory of Officer Ronald Tarentino, Jr. I stumped many golfers when it came hockey trivia, and our friend TRAX found out he needs to work on his golf game.

After TRAX had his fun on the golf course I brought him to the groomers to get ready for a big night. TRAX was the man of the night for Woman Out in Worcester at Mechanics Hall. We danced the night away and TRAX was quite the gentleman, giving roses to all the ladies. 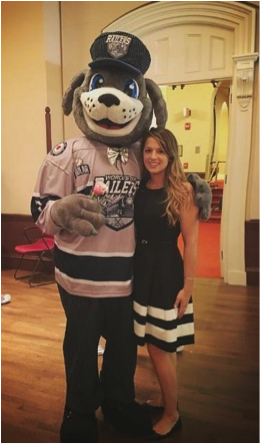 Despite the late night for both of us, we were up before the sun to prepare for the Fallon Health Canal Digger 5k. TRAX helped Owner Cliff Rucker send the runners off and cheered as they came across the finish line. The last runners finished right before the rain came down. If there is one thing TRAX doesn’t like its rain! I mean, I wouldn’t want to be a wet dog either so I can’t blame him!

Both the sun and TRAX came out on Sunday, September 11, at The Worcester Knights of Columbus Family Day cookout! We even ran into our friends from the Bravehearts with Jake the Lion, and Smokey the Bear!

TRAX, myself, and Railers president Mike Myers visited Immanuel Lutheran Nursery School in Holden on Friday, September 16. Many high 4s were exchanged between TRAX and the kiddos. They were the first group to receive our new Railers Waterless Tattoos! 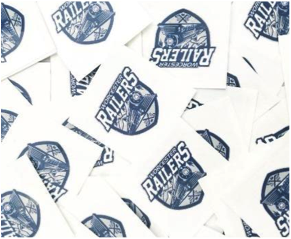 On Saturday, September 17, TRAX and I hit the street of Millbury at the Millbury Federated Church Block Party, you know it’s a good week when you run into Jake and the Bravehearts twice! TRAX and Jake learned some karate, ate some snow cones and played some street games with all who came out to celebrate.

The next stop on The Community Express is at the Central MA Step Out Walk To Stop Diabetes at Worcester’s UMass Medical School campus Saturday, September 24. TRAX will cheering at the starting line from 9:00 am-10:00am!

The day doesn’t end there for TRAX, he’s off to Wachusett Mountain for Kids Fest! Come out September 24-25, 10am-5pm and meet our front office staff for two days of music, food, and fun for the whole family! Oh and you can’t forget Railers Corn-hole!

To have TRAX at your next event visit http://railershc.com/community/mascot-appearances/

For more information on The Worcester Railers Community Events Contact me Jillianw@railershc.com

Skate to the DateOff the Beaten Track: September 23, 2016
Scroll to top