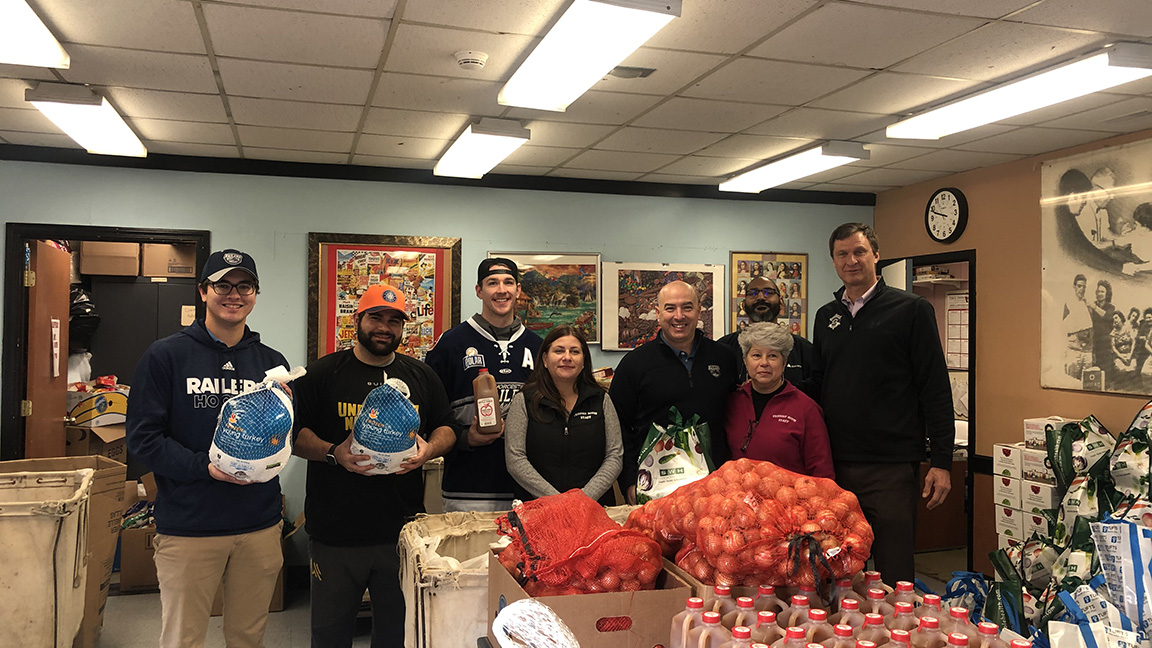 How’s it going, Railers fans? I can’t believe it is already December… the season is flying by. I hope everyone had a great Thanksgiving with their friends and family! A lot has gone on since our last post in mid-August… we’ve appeared at over 75 community events, Skate to Success welcomed its 5,000thall-time student, we distributed meals at the Friendly House and much more. Let’s recap!

Skate to Success – Skate to Success (STS) kicked off its third year in early September. For those that do not know, STS is our flagship community program that welcomes on average 100 fourth grade Worcester Public School students to the Fidelity Bank Worcester Ice Center each Tuesday at no cost. Over the course of the year, 2000 students will take part in this learn to skate program in which many  have never been in an ice rink let alone ice skate! 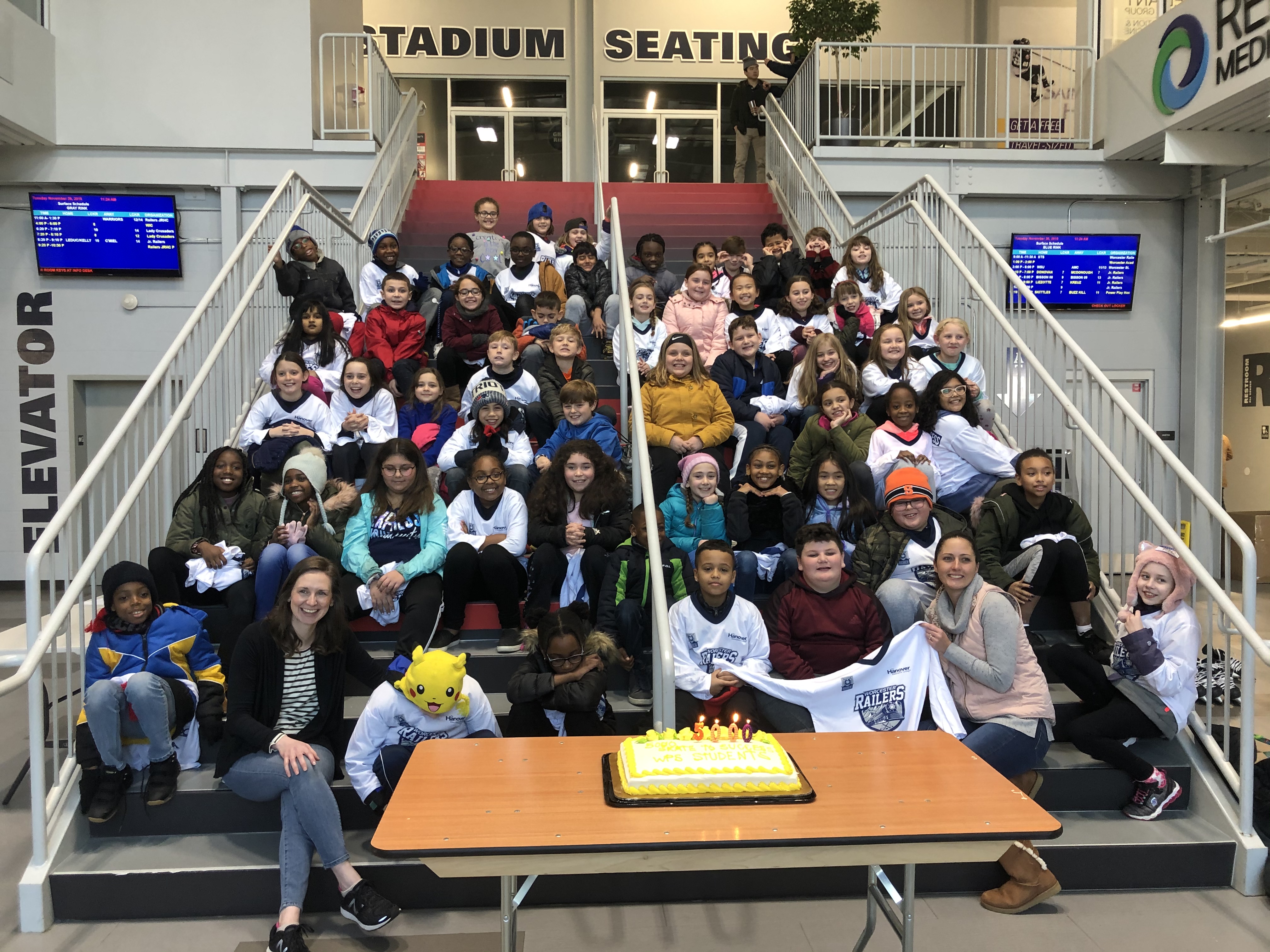 On Nov. 26th, we welcomed our 5,000thall-time student and celebrated with cake and cookies. It was fitting that this program welcomed students from Worcester Public School’s New Citizen Program. Ten students, who barely spoke English and were new to the country, got to experience ice skating for the first time. This is what Skate to Success is all about.

Anthony and Ross Olsson – Skate to Success welcomed Elm Park Community School a few weeks back and it ended up being one of the best success stories I’ve seen running this program. Anthony, an autistic fourth grader, had never ice skated before. After lacing his skates and buckling his helmet, Anthony got on the ice and was visibly upset. He started crying and darted to the locker room. Anthony was afraid and didn’t like the way the skates felt on his feet. Ross Olsson, one of our Railers HC players who was volunteering at the program, saw this and went to the locker room to comfort Anthony. 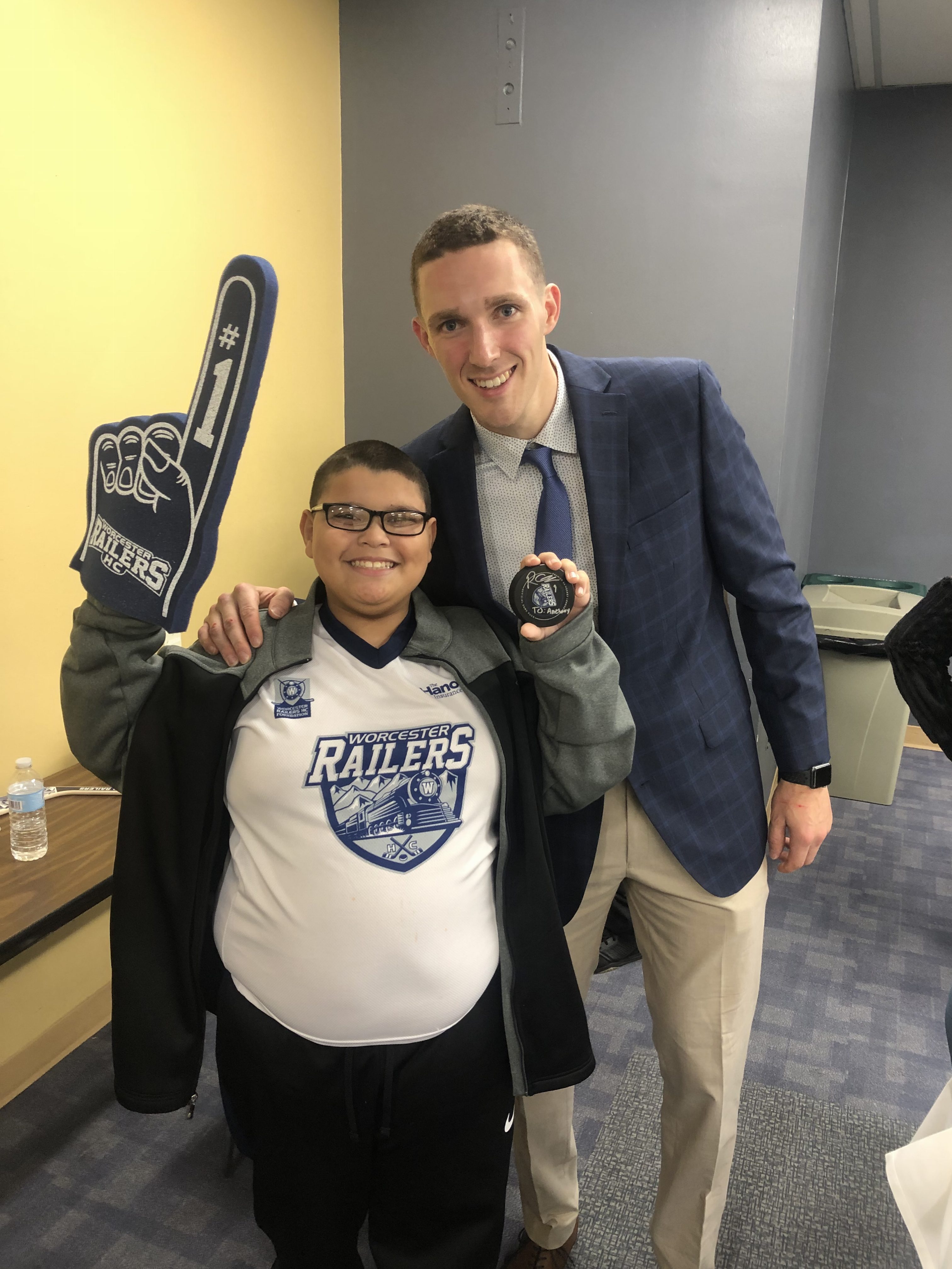 He convinced him to head back out on the ice and he stayed with him for the remainder of the program. Anthony didn’t want to come off the ice when it was lunch time. A couple weeks later, we surprised Anthony with tickets to a Railers HC home game where he received a VIP experience that included a locker room tour, a high five tunnel experience, and a surprise post game meet and greet with Ross. Anthony’s face lit up when Ross came by to say hello. Ross signed a game puck for Anthony and chatted with his family. There’s nothing better than knowing you made a positive impact in someone’s life.

Friendly House – The Worcester Railers have been active volunteers and frequent donors to the Friendly House of Worcester. For the third consecutive year, the Worcester Railers HC brought staff members, TRAX, and a player to help distribute Thanksgiving meals to those less fortunate. Railers defenseman Connor Doherty volunteered for the second consecutive year. A Holden native, Connor was happy he was able to give back to members of his own community. Click HERE for more information.

Junior Railers Surprise – Yet another powerful story took place a few weeks ago at the Fidelity Bank Worcester Ice Center. Bobby Butler, Ben Brouillard and I organized a Junior Railers practice takeover. This specific Junior Railers group were winless and started to get discouraged. We wanted to bring some Railers players over to surprise them and prove how much fun hockey can be. Ross Olsson, Justin Murray, JD Dudek, Evan Buitenhuis, and Drew Callin volunteered to scrimmage the squirts. The Junior Railers won and carried this momentum into the following weekend where they won their first game of the season. It turned out to be an amazing story. For a video recap, click HERE.

Holiday Charity Skate + Toy Drive – The Worcester Railers HC for the third consecutive year were proud sponsors of the Sheriff’s Toy Drive and Charity Skate that took place in early December at the Fidelity Bank Worcester Ice Center. Children from the Boys and Girls Club, Guild of St. Agnes, and Friendly House of Worcester were bussed in for a Skate to Success-like learn to skate program. 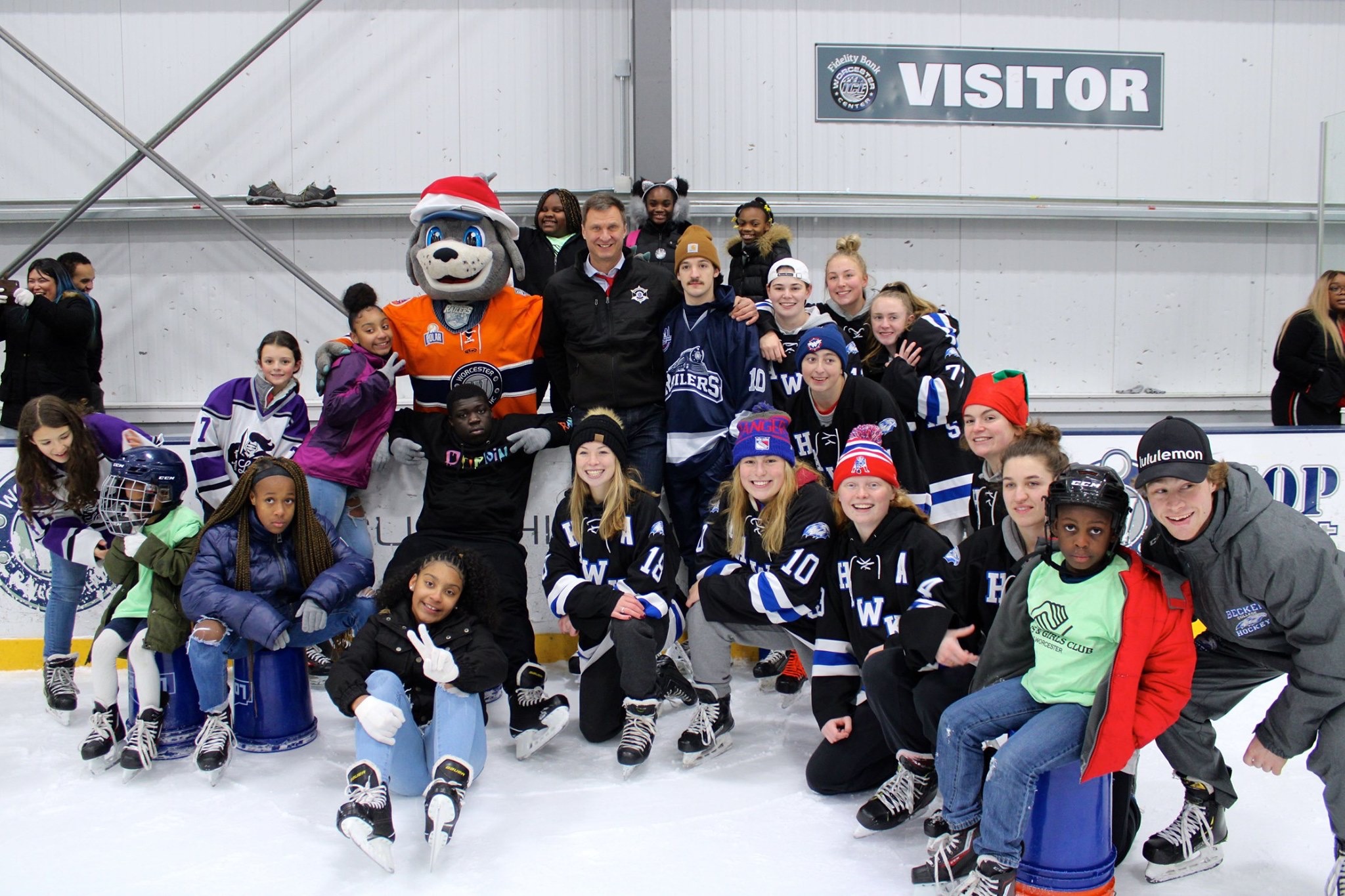 Railers staff, Becker College Men and Women’s Hockey, Junior Railers, and Junior Crusaders volunteers helped guide 125 students on the ice. The toy drive collected hundreds of toys that will be split up among the nonprofits for their own holiday gift distribution. Trax was out on the ice as well!

We have a lot to look forward to as the holiday season approaches. Trax will be busy appearing at multiple holiday parties, tree lighting ceremonies, and schools. The Railers HC will be conducting a Toy Drive along with their fourth annual Season of Giving where nonprofits in need will be given much needed financial aid to wrap up the year. We have donated over $100,000 the past four years! In 2020, the Railers will continue hosting learn to skates and reading programs but a couple things to look forward to is our annual library renovation and player bartending events! More info soon! As always, any questions or comments community related can be emailed to me at paulh@railershc.com. I hope everyone has a fantastic holiday season and a happy new year! See you at the rink!

Railers Come Up Short on The Rock Falling 3-2