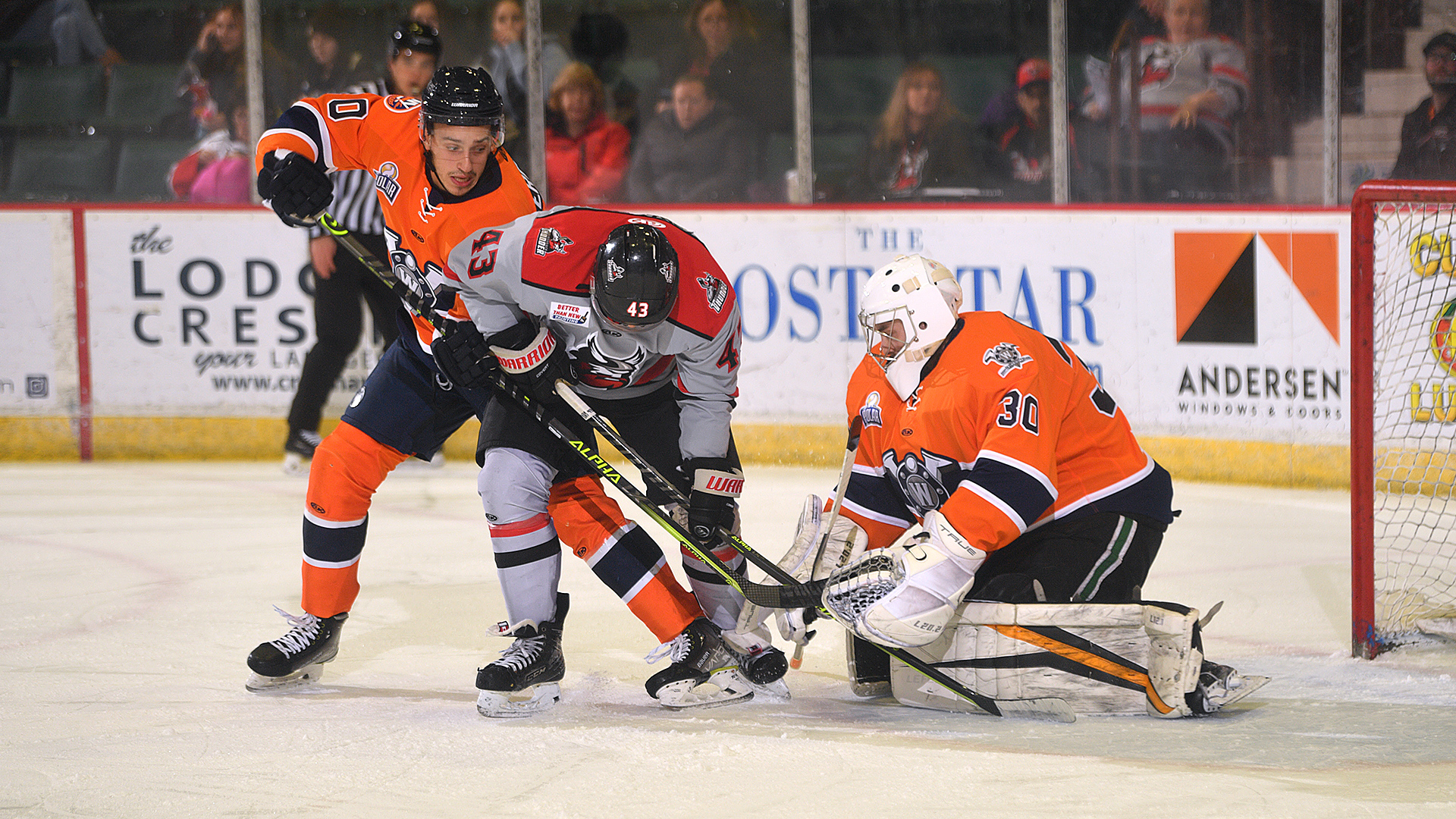 Meeting 8 of 17 vs Adirondack this season.

Brent Moran made 34 saves in his first ECHL start

The Worcester Railers had a new addition to the team with defensemen Jake Schultz signing an ECHL deal before the game. Xavier Parent (2-0-2) scored the first goal of the game for the Thunder. Parent scored again a few minutes later making it 2-0. Ryan Smith (1-0-1) scored the first goal of the second period during a four-on-three powerplay for the Thunder. Bobby Butler (1-1-2) scored the first goal for Worcester seconds after to make it 3-1 Thunder. Blake Christensen (1-0-1) capitalized on the Railers second powerplay to score their second goal, making it 3-2 Thunder at the end of the second period. Ryan Da Silva (1-0-1) scored the first goal in the third period on an empty net just before Anthony Repaci (1-0-1) fired one past Theut with thirty seconds left in the game for the last tally of the night. The Railers comeback fell short as they lost 4-3 to Adirondack

The game was scoreless for the first nine minutes of the game until Xavier Parent (9th) wound up and took a shot from a distance which flew past Railers goalie Brent Moran. The Railers had a great chance to tie it up when Blake Christensen skated past the Thunder defense but couldn’t get the puck in the back of the net. Nolan Vesey had a good chance to score when he was one-on-one with Thunder goalie Jake Theut. Vesey deked left and right then shot it with his backhand, the puck just missed the goal keeping the Railers scoreless. The Thunder scored their second of the period when Parent (10th) took another shot at Moran that slid past him for Parent’s tenth goal of the season and his fifth again the Railers in two games between the teams. The score remained 2-0 in favor of the Thunder at the end of the first. The Railers were outshot 15-14 in the first period.

Ten minutes into the second period Travis Broughman was whistled for hooking to put Worcester on the first powerplay of the night. Worcester failed to capitalize and opened up the game 0-for-1 on the power play. A few minutes later, Adirondack got their first power play of the night after Jeff Solow was called for delay of game. Fourteen seconds into Adirondack’s powerplay, Ryan Da Silva was called for interference making it a four-on-four. Thirty-four seconds later, Reece Newkirk was whistled for hooking making it a four-on-three for Adirondack. Adirondack capitalized on the four-on-three when Ryan Smith (5th) scored the third goal of the game. Just 22 seconds after that, Bobby Butler (11th) responded with the Railers first goal of the game. Christian Evers skated the puck up the ice and passed it over to Bobby Butler who rifled it top-shelf past Theut for the goal. Brandon Schultz was called for tripping putting the Railers back on the powerplay with 2:41 remaining in the second. This turned out to be a costly penalty for the Thunder as Blake Christensen (5th) would skate from behind the goal to the far circle and sneak one through Theut to score the second Railers goal. The second period would end fifty-five seconds later with the Railers down 3-2. Worcester was outshot in the second 16-13 and was outshot through two periods 31-17.

The Railers entered the third period down by one looking to snap their three-game losing streak after being down by 2 goals early in the game. Brent Moran made a couple of big saves on a rush up ice from Adirondack early in the period. An ensuing scrum sent Xavier Parent to the box and put Worcester back on the power play. Nothing came of that powerplay for Worcester, still needing one goal to tie the game. With less than three minutes left to play, Moran was pulled to get the extra skater on the ice. Ryan Da Silva (2nd) got the puck and fired it the full 200 feet down-ice into the empty net to make it a two-goal game with a minute left in the game. The Railers hopped on the powerplay to end the game and Anthony Repaci (7th) fired one past Theut with thirty seconds remaining to get Worcester back within one. That would be the last goal for Worcester on the night, just falling short of the comeback as Adirondack came out on top 4-3. Worcester outshot Adirondack 11-7 in the third, while shots ended up tied at 38 apiece.