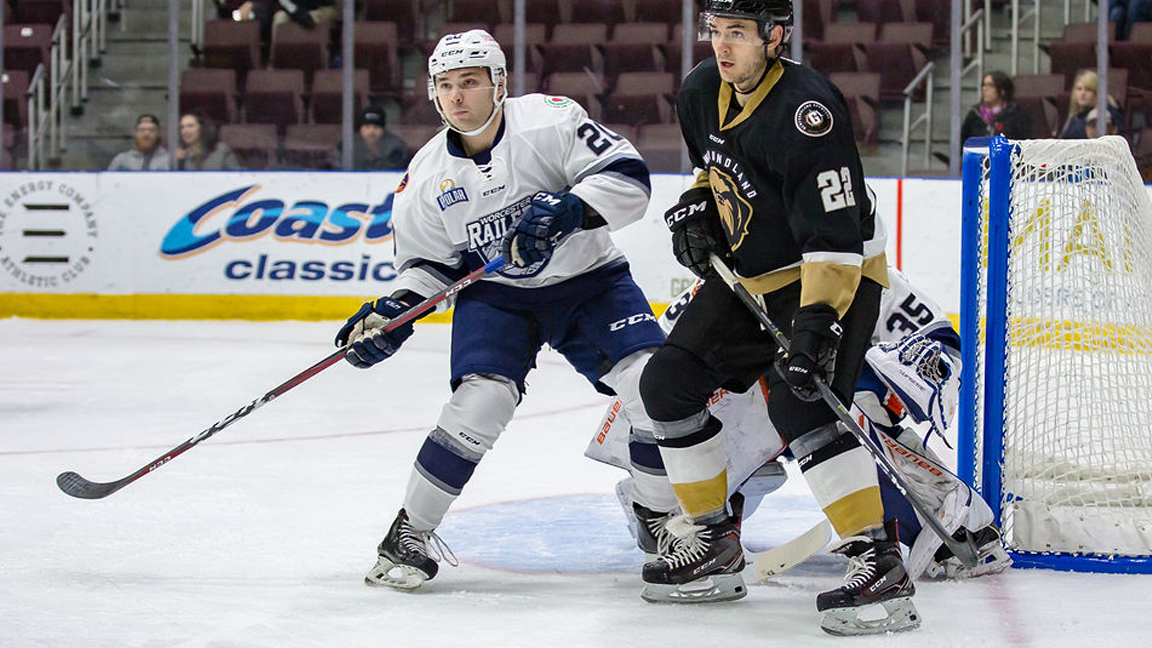 Meeting 6 of 8 vs. Newfoundland this season

Railers came out slow in the first period as Evan Buitenhuis stood on his head and made 14 saves as the Growlers grabbed a 1-0 lead through 20 minutes.  Derian Plouffe (7th) finished off a James Melindy end to end rush at 12:39 for the only score of the period as Eamon McAdam only had to make seven saves for the Growlers.

Nick Sorkin (10th) ripped a shot from 35 feet over the shoulder of Eamon McAdam just 60 seconds into the second period to tie the score at 1-1 with Matty Gaudreau and Mike Cornell picking up the assists.  Worcester outshot Newfoundland 14-8 in the middle frame as the two clubs headed to the second intermission all tied up.

Tyler Barnes (15th) fired home a loose puck at 1:29 of the third period assisted by Barry Almeida and Ryan Hitchcock to give the Railers a 2-1 edge.  After a slew of questionable calls against Worcester, Zach O’Brien (17th) tied the score with a one timer at 4:09 with a two-man advantage goal.  James Melindy (1st) followed up his own rebound at 11:54 for the eventual game winner and Hudson Elynuik and Scott Pooley (19th) added empty netters to give the Growlers a 5-2 home win.

Notes: Three Stars: 3rd star: Zach O’Brien (1-0-1) 2nd star: Derian Plouffe (1-0-1) 1st star: James Melindy (1-1-2) …. final shots were 33-29 in favor of Newfoundland…. Eamon McAdam (2-2-1) made 27 saves on 29 shots for Newfoundland.…. Evan Buitenhuis (7-8-3) made 28 saves on 31 shots for Worcester while Evan Mitch Gillam was the backup….Worcester went 0-for-3 on the power play while Newfoundland went 1-for-56…. Kyle McKenzie (inj), Tommy Kelley, Bo Brauer, Tyler Mueller (inj), and Malcolm Gould (inj) did not dress for Worcester…. Jeff Kubiak is on recall with the Bridgeport Sound Tigers… Tyler Barnes now has a five-game point streak (4-3-7)…. Worcester has allowed a power play goal in six straight games….Ryan Hitchcock has five assists in his last two games…. Barry Almeida (3-8-11) has 11 points in his last 11 games….Barry Almeida and Mike Cornell each received 10-minute misconducts…. Worcester was whistled for 32 penalty minutes – St. Johns just 8…Ryan Hitchcock had seven shots on goal…the Railers are now 0-3-0-0 at the Mile One Centre.