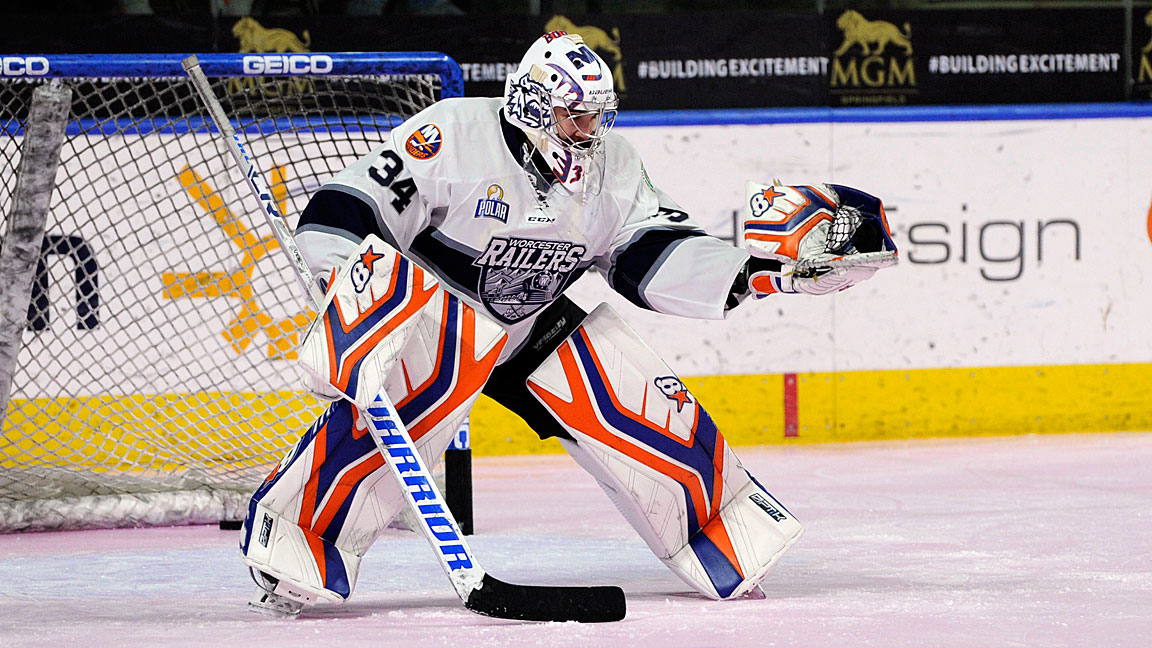 Meeting 1 of 2 vs. Tulsa this season

Tulsa, OK – The Worcester Railers HC (23-20-5-3, 54pts) continued their season long seven-game road trip with their first shutout win of the season in an 1-0 victory over the host Tulsa Oilers(29-18-4-2, 64pts) in front of 7,034 fans at the BOK Center on Saturday evening. Game four of the Railers road trip continues with an 5pm (ET) start in Tulsa, Oklahoma vs. the Oilers.

Tyler Barnes scored for Worcester while Evan Buitenhuis made 47 saves in net for his first professional shutout as the Railers improved to 2-0-1-0 on their seven-game road trip. Tyler Barnes extended his point streak to a franchise record 12 games (11-5-16) with a goal as Worcester improved to three games over .500 for the first time this season with the victory.

The Railers grabbed a 1-0 first period as Tyler Barnes (22nd) scored at 5:59 to extend his point streak to 12 games with Ryan Hitchcock and Bo Brauer picking up assists.  Yanick Turcotte (10th FM) dropped the mitts with fellow tough guy Mike McKee at 13:14 as Tulsa held a 14-13 shot advantage through 20 minutes of play.

Boots made 15 more saves in the third period as the Railers held on for the 1-0 road victory – the first shutout win of the season for Worcester.

Notes: Three Stars: 3rd star: Ian Keserich (22 saves, Loss) 2nd star: Tyler Barnes (GWG) 1st star: Evan Buitenhuis (47 saves first pro shutout) …. final shots were 47-23 in favor of Tulsa…. Ian Keserich (1-1-0) made 22 saves on 23 shots for Tulsa…. Evan Buitenhuis (9-8-4) made 47 saves on 47 shots for Worcester while Mitch Gillam was the backup…. Worcester went 0-for-2 on the power play while Tulsa went 0-for-2…. Kyle McKenzie (inj), Matt Schmalz (inj), Tommy Panico (inj), Connor Doherty (inj), David Quenneville (ill), and Tommy Kelley did not dress for Worcester…. Forward Malcolm Gould made his debut for the Railers after missing the first 50 games due to injury…. Bo Brauer played defense for the 3rd straight game and added an assist….Jeff Kubiak is on recall with the Bridgeport Sound Tigers….Tyler Barnes now has a franchise record 12-game point streak (11-5-16) with a goal – the goal ties the team record for most goal in a season as Barry Almeida scored 22 last season….Ryan Hitchcock now has 18 points (9-9-18) in his last 13 games for the Railers and now has a four game point streak (3-2-5)…….Ryan Hitchcock and Bo Brauer also added assists for Worcester…. the Railers are now 10-12-1-2 on the road this season and 2-0-1-0 on their season long seven game road trip.