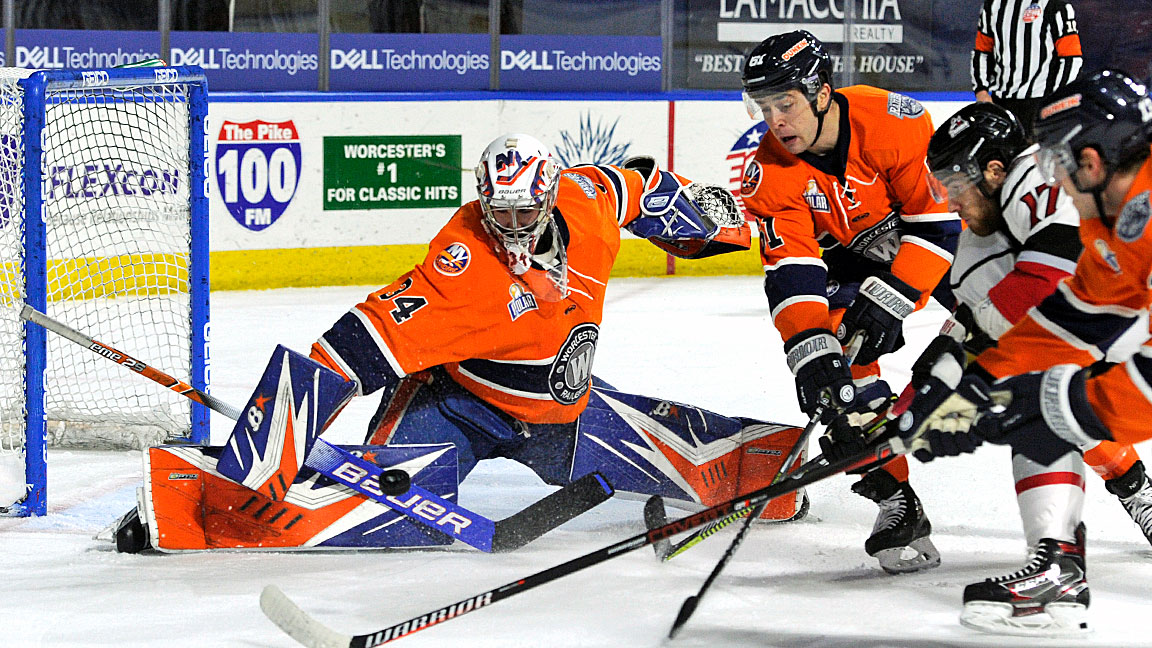 Adirondack Thunder at Worcester Railers HC
January 10, 2020
DCU Center
Meeting 9 of 14 vs. Adirondack this season
Railers are 5-4-0-0 vs. the Thunder this season

Worcester, MA – The Worcester Railers HC (14-19-2-0, 30pts) earned their fourth straight victory in a 3-2 hard fought affair over the Adirondack Thunder (13-16-5-5, 36pts) in front of 2,727 fans at the DCU Center on Friday evening. The Railers host the Newfoundland Growlers on Saturday night at 7pm for Star Wars Night and the can food drive.

Evan Buitenhuis made an astonishing 46 saves in net for the win while Ross Olsson (2-0-2) now has back to back two goal games. Yanick Turcotte extended his point streak to four games after missing the last two due to suspension and Drew Callin (0-2-2) tacked on two assists. net. Nikitia Popugaev and James Phelan each scored goals while Eamon McAdam made 20 saves in net for the loss.

Ross Olsson (7th) gave Worcester a 1-0 lead at 4:44 of the first period sneaking one through the right arm of Eamon McAdam from the top of the left circle. Adirondack would tie the game at 1-1 when Nikita Popugaev was able to cash in a rebound on the far side post. Evan Buitenhuis made 17 saves in the first period while the Railers were outshot 18-6 but the game was tied 1-1 through the first 20 minutes of play.

The Railers only power-play of the second period turned into a short-handed goal for Adirondack with James Phelan sending one by Evan Buitenhuis low blocker on a breakaway at 5:58 to give Adirondack a 2-1 lead, their first of the game. After Drew Callin drove the puck down the left side Yanick Turcotte corralled a loose puck and found Ross Olsson (8th) on the far side post where he buried it to tie it at 2-2. Despite being outshot 32-16 through 40 minutes of play the game was tied at 2-2 after two periods.

The lone goal of the third period came on a two on one rush led by Barry Almeida down the left side who dished it over to the right circle to Kyle Thomas (8th) who dragged it to the backhand undressing Eamon McAdam to give Worcester a 3-2 lead. Despite being assessed three penalties in the final 4:04 the Railers held on for a 3-2 lead.

Notes: Three Stars: 3rd star: Yanick Turcotte (0-1-1) 2nd star: Ross Olsson (2-0-2, +2) 1st star: Evan Buitenhuis (46 saves, Win) …. final shots were 48-24 in favor of Worcester…Eamon McAdam (7-11-3) made 21 saves on 24 shots Adirondack… Evan Buitenhuis (9-10-1) made 46 saves on 48 shots for Worcester while Ian Milosz served as the backup…. Worcester went 0-for-2 on the power play while Adirondack went 0-for-6…. Kyle McKenzie (inj,), Jordan Samuels-Thomas (inj), JD Dudek (IR), Tanner Pond (IR), Bo Brauer, and Cody Payne did not dress for Worcester…. Mike Cornell, David Quenneville, Linus Soderstrom, Jakub Skarek are all currently on recall with the Bridgeport Sound Tigers…. Alec March was released by Worcester on Thursday…. Phil Johansson made his Railers debut after being claimed off of waivers yesterday and finished with one shot…. Yanick Turcotte extended his point streak to four games…. Nic Pierog extended his point streak to four games and now has (6-6-12) in his last nine…. Ross Olsson had just four goals through his first 24 games and he now has four in his last two games….  Connor Doherty is the only Railers player to play in the first 35 games this season….. the Railers are now 10-9-1 under Coach Cunniff…. The Bubbleheads band performed in the Coors Light Cold Zone before the game and during both intermissions….  Worcester is now 20-10-2-0 vs. the Thunder all time and 8-5-1-0 at the DCU Center.

On Saturday, Jan 11 the Railers host Newfoundland Growlers at 7pm on a BIG GAME SATURDAY on STAR WARS NIGHT!  The first 2,000 fans will receive a Railers themed STAR WARS movie poster.  Bring a canned food item to benefit local community organizations and win prizes courtesy of Price Chopper and Market 32. Members of the 501st Garrison STAR WARS troop will be in attendance. Saturday Night Signings will feature a Railers player(s) signing autographs during the first intermission in the Fallon Health Pavilion.

Storm Toopers Power Past the Railers 5-3
Scroll to top