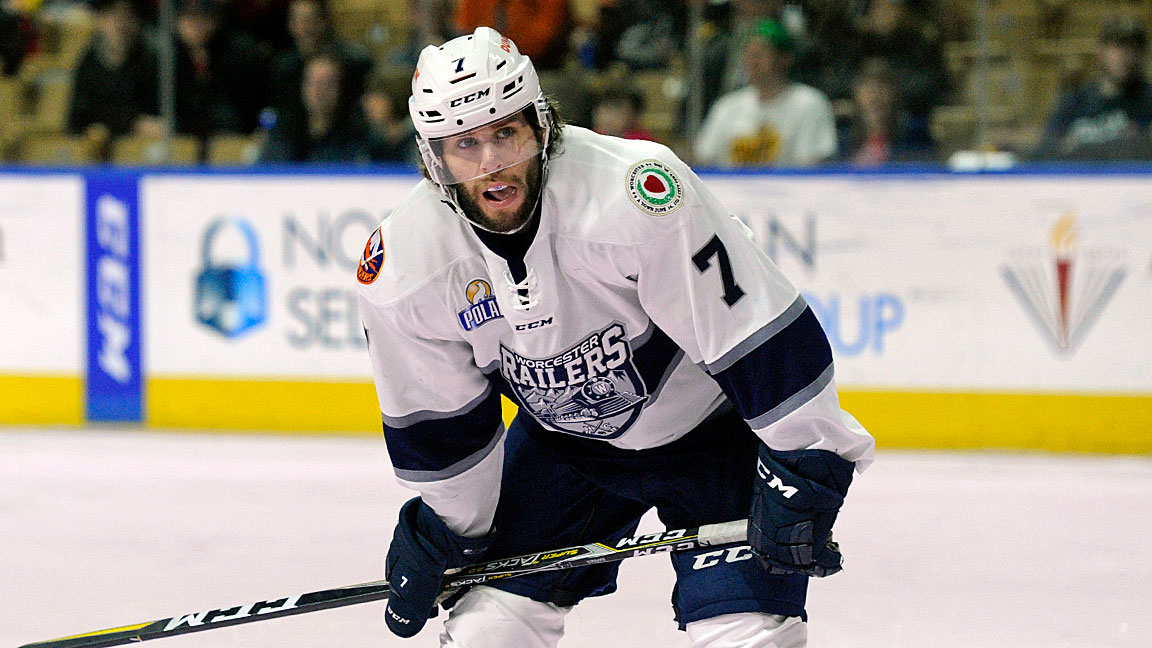 Meeting 2 of 2 vs. Tulsa this season

Tulsa, OK – The Worcester Railers HC (23-21-5-3, 54pts) continued their season long seven-game road trip with a 6-3 loss to the host Tulsa Oilers (30-18-4-2,66pts) in front of 5,145 fans at the BOK Center on Sunday afternoon. With the loss, the Railers remain two points behind the Manchester Monarchs for the 4th and final playoff spot in the North Division. Game five of the Railers road trip continues with an 7pm (ET) start in Manchester, NH vs. the Monarchs.

Ryan MacKinnon, Barry Almeida (1-1-2), and Ivan Kosorenkov (1-1-2) scored for Worcester while Mitch Gillam allowed five goals on 10 shots through 13:53 before getting pulled for Evan Buitenhuis as the Railers fell to 2-1-1-0 on their seven-game road trip. Tyler Barnes extended his point streak to a franchise record 13 games (11-6-17) with an assist as Worcester recorded a season high 51 penalty minutes. Adam Pleskach (1-2-3) and Tommy Mele (2-0-2) led the Oilers offensively while emergency goaltender Ian Keserich made 17 saves in net for the win.

Worcester came out with a good charge as Ryan MacKinnon (5th) fired a bomb from the center point through a screen at 3:15 to give the Railers an early 1-0 lead. Tulsa would then score five straight goals on 10 shots on netminder Mitch Gillam.  Kyle Rhodes (11th) tied the score at 4:00 and Tommy Mele put Tulsa ahead 2-1 at 4:28.  Jared Thomas (17th) struck at 6:50 followed by Tommy Mele (4th) again at  7:02.  Mitch Gillam’s night would come to an end at 13:53 after Adam Phillips fired one from 50 feet to give the Oilers a 5-1 advantage.  Ryan MacKinnon (1st FM) and Yanick Turcotte (11th FM) each picked up fighting major penalties in a frustrating first period of play as the Oilers outshot the Railers 16-8 through 20 minutes of play.

Things got nasty in the second period with 16 total penalties called and a pair of game misconducts to Nick Sorkin and Mike Cornell during two separate incidents. Adam Pleskach (27th) scored his ECHL leading 27th goal on the power play just 33 seconds into the second period while Barry Almeida (15th) scored on a breakaway at 6:50 to make it 6-2 Oilers.  Shots were 32-15 Tulsa through 40 minutes of play.

Ivan Kosorenkov (9th) scored the only goal of the third period at 10:31 with Tyler Barnes and Ryan Hitchcock picking up assists on the power play tally.  Shots were 9-5 in favor of Tulsa in the final frame as the Railers dropped the road game 6-3.

Notes: Three Stars: 3rd star: Chris Forney (0-2-2) 2nd star: Jared Thomas (1-1-2) 1st star: Tommy Mele (2-0-2) …. final shots were 41-20 in favor of Tulsa…. Ian Keserich (2-1-0) made 17 saves on 20 shots for Tulsa…. Mitch Gillam (14-13-3) made 5 saves on 10 shots for Worcester in 13:53 while Evan Buitenhuis made 30 saves in relief…. Worcester went 2-for-5 on the power play while Tulsa went 1-for-5…. Kyle McKenzie (inj), Matt Schmalz (inj), Tommy Panico (inj), Connor Doherty (inj), David Quenneville (ill), and Malcolm Gould did not dress for Worcester…. Bo Brauer played defense for the 4th straight game….Jeff Kubiak is on recall with the Bridgeport Sound Tigers….Tyler Barnes now has a franchise record 13-game point streak (11-6-17) with an assist….Ryan Hitchcock now has 19 points (9-10-19) in his last 14 games for the Railers and now has a five game point streak (3-3-6)…….Barry Almeida now has a four game point streak (3-4-7)….Ivan Kosorenkov, Barry Almeida, Tyler Mueller, Ryan Hitchcock, and Tyler Barnes added assists for Worcester….Yanick Turcotte has a fighting major in three straight games and leads the club with 11 this season….the fight for Ryan MacKinnon vs. Alex Kromm was the 1st pro fighting major for MacKinnon….Mike Cornell had a game high 19 penalty minutes and now leads the club with 147 penalty minutes on the season and the most among ECHL defensemen….the 51 penalty minutes for the Railers were a season high and the 2nd in franchise history….the Railers are now 10-13-1-2 on the road this season and 2-1-1-0 on their season long seven game road trip.