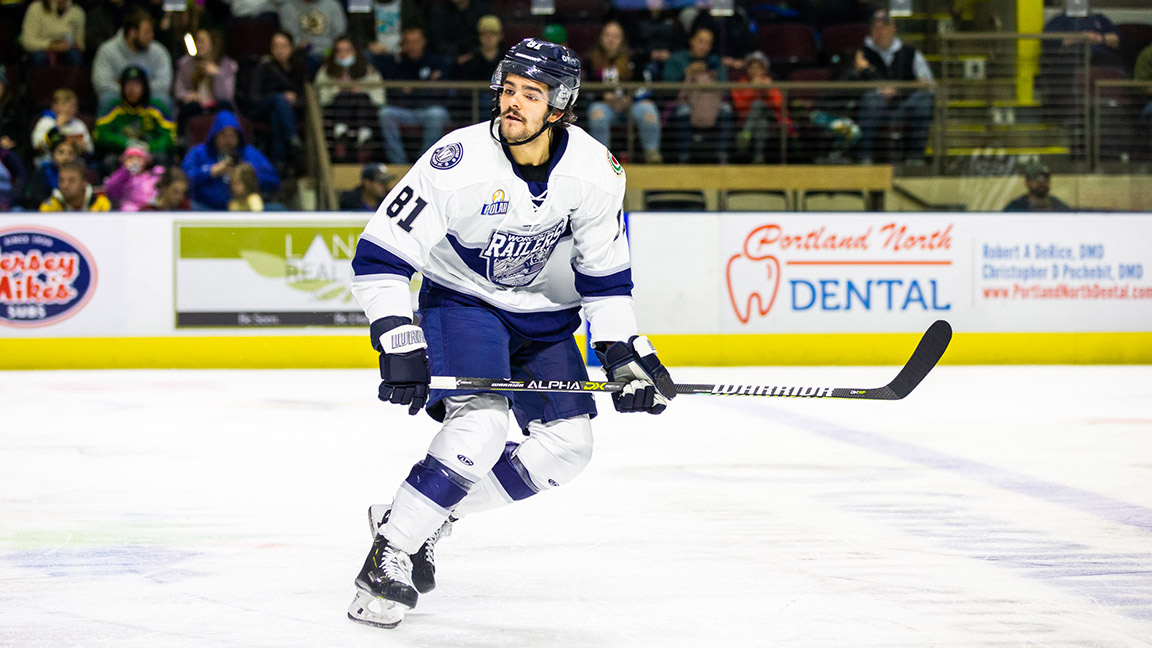 Worcester won a crazy game Wednesday morning beating the Maine Mariners in overtime, 7-6, before a loud, loud crowd of 5,422 —  most of them students.

Anthony Repaci got the OT goal at 5:46, scoring at least once on two wrist shots from the right circle. His first one hit metal at the top far corner of the Maine net and bounced directly back to him, so he banged at it again and this time the puck was in to stay.

“Great question, and I have no idea,” Repaci said when asked if the first one went in. “It looked like it went in but I wasn’t taking any chances.”

The two points were a huge boost in Worcester’s quest to move into playoff position, but the Railers also gave a point away to Maine with the OT triumph. Worcester had a 6-4 lead with 15 minutes left in the third period then gave up goals at 5:39 and again at 19:17 with Mariners’ goalie Callum Booth out in favor of an extra skater.

“It shows a lot about the character of our guys,” coach David Cunniff said. “We’re learning how to win and finding ways to win. We gave up a point and that’s unfortunate, but our goal is to get better every day and there are going to be some good teaching points in that game.”

Repaci’s goal gave the Railers their 12th overtime victory ever, but just the third at the DCU Center. The last OT goal here was by Matt Schmalz on Jan. 18, 2019 in a 3-2 victory over Newfoundland.

The goal also set a Railers record for most goals in a home game. They had never scored more than six before Wednesday.

Repaci was one of several Railers with multi-point games. He was 1-2-3 and Drew Callin was 2-1-3. John Furgele had a pair of assists; Jordan Smotherman and Liam Coughlin were both 1-1-2.

The other Railers goal scorers were Zach Malatesta and Jacob Hayhurst.

Maine got two goals from Justin Brazeau, including the one to make it 6-6.  Michael Kim, Keltie Jeri-Leon, Mathew Santos and Patrick Shea had the other Mariners goals. Maine’s biggest point producer was, however, Connor Doherty with three assists.

He never had more than two in a game in 143 games with the Railers.

“Three in a game?,” Doherty said. “Maybe back in Peewee.”

The first period was the wildest of the season at the DCU Center and gave the kids lots of reasons to scream, not that they needed any additional ones.

Callin buried a 30-foot wrist shot at 3:31, Brazeau turned the Railers defense and scored from in close at 6:35, Smotherman converted a rebound of a shot by Repaci at 8:50 and Shea made it 2-2 at 9:57, once again from in close.

The Mariners went ahead on a two-man advantage goal by Kim at 13:54, then Malatesta evened things up at 19:48 with a screaming short-side wrister from the left circle.

It was 4-4 after two as Hayhurst and Jeri-Leon traded goals a minute apart. Callin made it 5-4 at 4:32 of the third period and Coughlin scored 24 seconds later.

Santos got the goal to make it 6-5, then Brazeau buried a rebound to send it into overtime.

“We kind of let our guard down a bit,” Repaci said. “When we went up 6-4 I think we figured we had it all wrapped up and (Cunniff) did a good job of getting us back on track.”

MAKING TRACKS_The roster-go-round continued unabated, although the news was not all bad for the Railers. They got defenseman Nick Albano back from Springfield. Albano, who scored Worcester’s first goal of the season, had a good 10-game stint in the AHL at 0-2-2 and plus-4 in 10 games. He was plus-3 in this one. … Callin returned from the Commisioners Exempt List but goalie Ken Appleby remains on it. The teams continue this three-game series with a match in Portland on Friday night, then return to the DCU Center Saturday. That game, the annual Teddy Bear Toss, will feature the debut of Laura Schmidlein as the first female linesperson in ECHL history. … The referee was Sam Heidemann, making his first DCU Center appearance. … Myles McGurty and Nolan Vesey did not dress for the Railers. With McGurty not in the lineup, only Malatesta and Hayhurst have played in every Railers game this season.