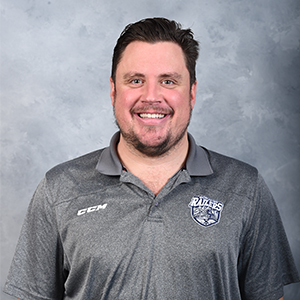 Eric Lindquist serves as the Vice President of Marketing and Communications after spending the last nine seasons with the San Jose Sharks AHL affiliates in San Jose and Worcester. Lindquist spent eight years with the Worcester Sharks as the club’s director of public relations and broadcasting, which included calling the action for the 2009 AHL All-Star Game in Worcester.

The native of North Andover, MA is a veteran of over 1,000 games on TV and radio in the AHL and ECHL with San Jose, Worcester, Long Beach, and Lowell. Lindquist has over 15 years of experience in professional sports with a focus in marketing, public relations, hockey operations, broadcasting, and sales.

Eric is a graduate of Northeastern University where he called the action for the Huskies men’s hockey and baseball teams for two seasons. A game show fanatic, Eric has also won $60,000 on Wheel of Fortune and won the Showcase Showdown on the Price is Right with Bob Barker.