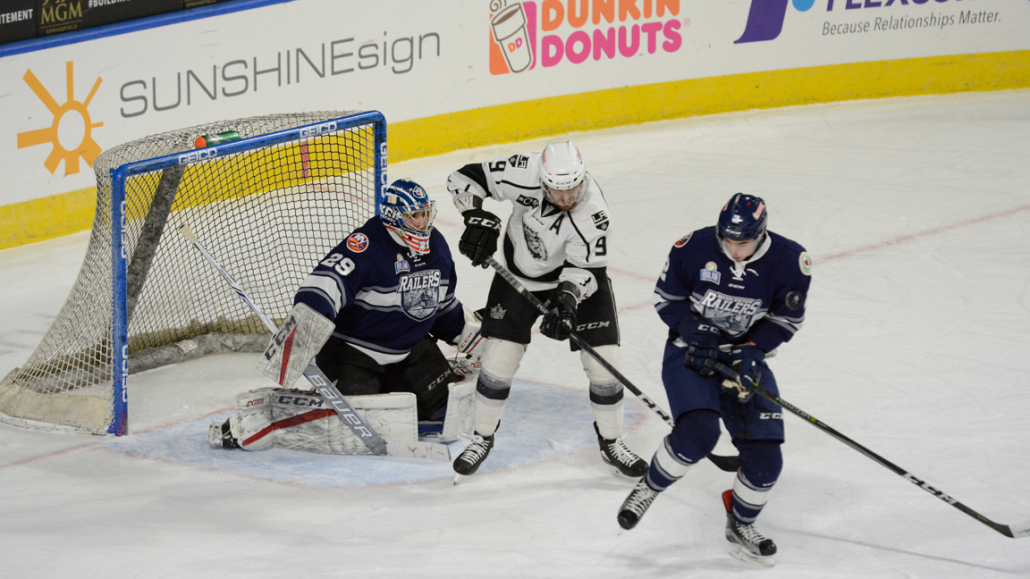 Meeting 15 of 15 vs. Monarchs this season

Worcester went 7-8-0-0 vs. Manchester this season

Over 7,000 fans at DCU Center cheer on Railers on Fan Appreciation Day

Worcester, MA – The Worcester Railers HC(37-27-4-4, 82pts) closed out the regular season with a 2-0 loss to the visiting Manchester Monarchs(41-25-3-3, 88pts) in front of 7,191 fans at the DCU Center on Sunday afternoon. The Railers will face the Adirondack Thunder in the first round of the Kelly Cup playoffs which will begin Friday, April 13 at 7pm at Glens Falls, NY.

Sam Kurker and Michael Doherty scored for the Monarchs as Will King made 25 saves in net for the Railers.  Worcester had a season high six straight game win streak snapped as Evan Cowley made 24 saves in net for Manchester.

Neither team found the back of the net in the opening frame with the only real excitement occurring at 10:14 as Frankie DiChiara (2ndFM) dropped Jake Wood with a series of rights after a high hit on Matt Lane at center ice.  Shots were 7-4 in favor of Manchester through 20 minutes of play.

Manchester got on the board at 16:08 of the second period after a perfect shot by Sam Kurker (12th) from 25 feet that hit the crossbar and into the net. Yanick Turcotte picked up his 20thfighting major with a long tussle by Tony Turgeon at 17:19. Shots were 20-16 in favor of Manchester though 40 minutes as the Railers trailed 1-0 through two periods of play.

The Railers thought they had tied the game late in the third period as the red light went on after a goal mouth scramble, but after a brief discussion it was ruled no goal. Michael Doherty (20th) scored an empty netter at 18:39 to give Manchester a 2-0 road victory.

Notes: Three Stars: 3rd star: Will King (25 saves) 2nd star: Frankie DiChiara (Fight) 1st star: Yanick Turcotte (20thFighting Major) …Final shots were 27-24 in favor of Manchester…Evan Cowley (9-9-1) made 24 saves on 24 shots for Manchester… Charles Williams was the backup for the Monarchs…. Will King (7-10-1) made 25 saves in 26 shot in net for Worcester…Mitch Gillam was the backup goaltender for the Railers…. Worcester went 0-for-0 on the power play while Manchester went 0-for-3…Josh Monk (inj), Chris Langkow (inj), Tommy Kelley (inj), Mike Cornell, Matty Gaudreau, and Barry Almeida did not dress for Worcester…. Kellen Jones, Eamon McAdam, Jeff Kubiak, Patrick Cullity, Josh Holmstrom, and Kyle Schempp are currently on recall with the Bridgeport Sound Tigers…. the Railers closed out the season with seven games in 12 days…. the Railers finished 11-2-1 in their last 14 games overall… Worcester closed the season with a 21-13-2-0 record at the DCU Center…Turcotte finished with 20 fighting majors – tied for 1stin the ECHL,