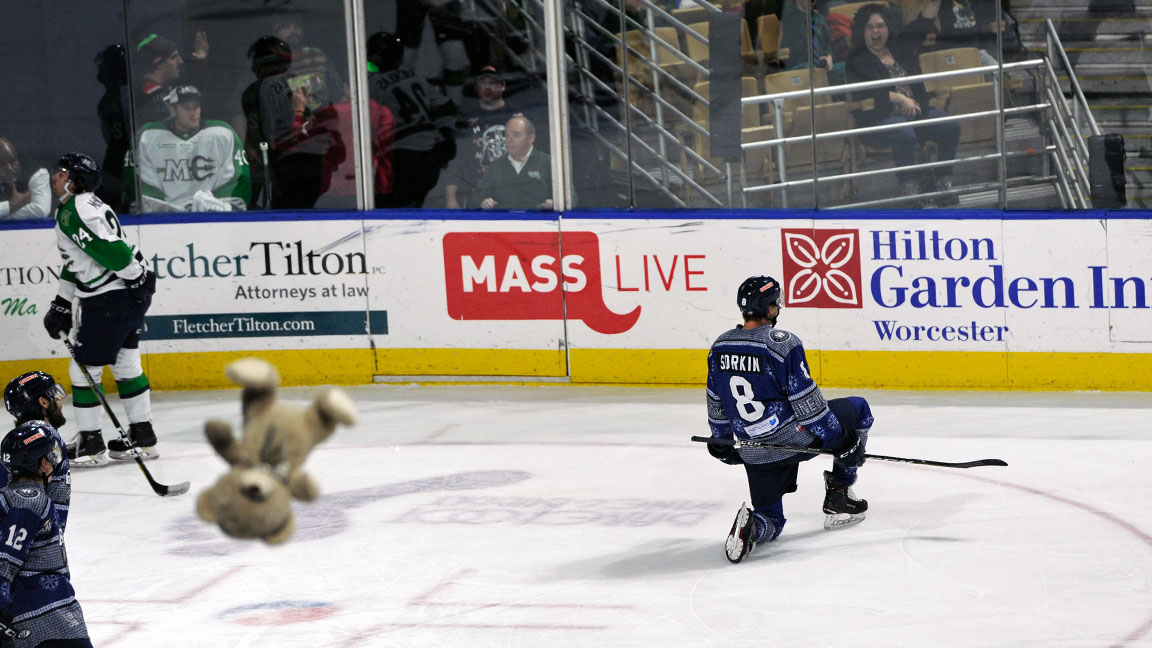 Meeting 7 of 14 vs. Maine this season

The Railers, wearing UGLY SWEATER jerseys to benefit the Shine Initiative presented by Fidelity Bank fired 47 shots but just a single goal from Nick Sorkin while Evan Buitenhuis made 24 saves in net in the shootout loss.  Ryan Ferrill scored for the Mariners while Brandon Halverson was spectacular making 46 saves in net for his 10thwin of the season.  Alex Kile netted the game winner in the third round of the shootout to give Maine just their 5throad win of the season.

The Railers had great pressure in the first period outshooting Maine 9-5 despite being in the box three times in the opening frame. Nick Sorkin (4th) netted his first power play goal of the season, the Teddy Bear Toss goal as he was stationed on top of the crease and deflected a Mike Cornell slap pass into the net at 15:03. Worcester took a 1-0 lead into the first intermission.

Worcester continued the pressure in the second period outshooting Maine 13-7 in the second period but unable to solve netminder Brandon Halverson.  After a huge open ice check by Tyler Barnes, Maine would strike on the ensuing power play as Sean Day (5th) sent a shot from the point that went off Mike Cornell and over Evan Buitenhuis at 18:41 to tie the score at 1-1 through 40 minutes of play.

Neither team scored in a wild overtime that saw Worcester fire six more shots on net which included a backhand stop on Matty Gaudreau from on top of the crease.  Michael McNicholas and Alex Kile scored for Maine in the shootout while Nick Sorkin was the only scorer for Worcester as the Railers fell 2-1 in the shootout.

Notes: Three Stars: 3rd star: Nick Sorkin (Goal, Shootout Goal) 2nd star: Alex Kile (Assist, GWG in SO) 1st star: Brandon Halverson (46 saves, Win) …. final shots were 47-26 in favor of Worcester…. Brandon Halverson (10-6-1) made 46 saves on 47 shots for Maine and stopped 2-of-3 in the shootout…. Evan Buitenhuis (5-5-3) made 24 saves on 25 shots for Worcester…. while Mitch Gillam served as the backup…. Worcester went 1-for-3 on the power play while Maine went 1-for-5…. Tommy Kelley (inj), Alex Vanier, Kyle McKenzie (inj), Austin Block, Yanick Turcotte, and Malcolm Gould (inj) did not dress for Worcester…. Jeff Kubiak is currently on recall with the Bridgeport Sound Tigers…Worcester falls to 7-4-3-1 at home this season…. Eric Cairns from the NY Islanders was once again in attendance as was ECHL Commissioner Ryan Crelin.…. the fans threw teddy bears on the ice after Nick Sorkin scored the Railers first goal – the bears are to be donated to the Friendly House…. Maine was playing their 4thgame in five days, there 5thin seven days….it was the first shootout loss of the season for the Railers….Nick Sorkin, Woody Hudson, and Josh Holmstrom all fired six shots on goal…the UGLY SWEATER jerseys were auctioned off to benefit the Shine Initiative…over $1,200 was raised for the Ava Roy Fund through the 50/50 raffle through the Railers Booster Club.

What’s on tap?….Railers hit the road for one

On Friday, Dec 21 the Railers host the Adirondack Thunder at 7pm on a 2-3-4 Friday!  Boston Bruins Alum Rick Middleton will sign autographs from 6-7:30pm.  Enjoy $2 popcorn, $3 soda, and $4 Bud Lights in the Bud Light Lounge.  The first 1,000 fans will receive a BOGO burrito offer from Chipotle.

The Tom & Eric Show is back!