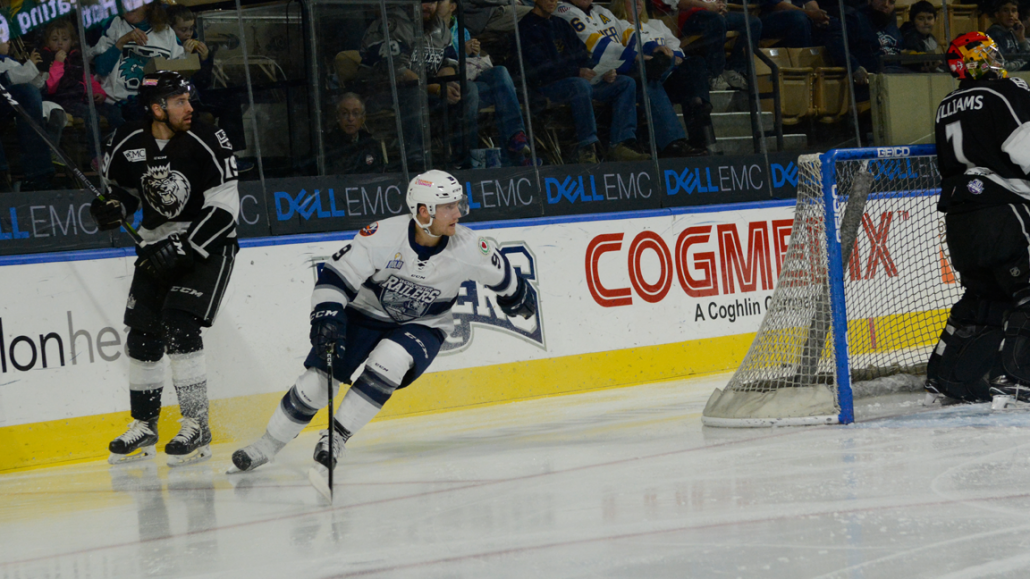 Meeting 6 of 15 vs. Manchester this season

Worcester fired an ECHL high 27 shots in the second period which led to a pair of shorthanded goals by Ashton Rome and Kellen Jones.  Eamon McAdam was terrific in net in his 4th straight start as he made 28 saves while the Railers added third period goals by Kyle McKenzie and Matty Gaudreau to seal the 4-1 victory.

Manchester had more of the energy in the opening period and outshot Worcester 12-5 and scored the periods only goal.  Zac Lynch (6th) finished off a nice rush on the power play with a quick snap shot from 30 feet past netminder Eamon McAdam at 11:27. The Railers trailed 1-0 after 20 minutes of play.

A wild second period saw Worcester fire 27 shots on goal and score a pair of shorthanded goals to take a 2-1 advantage.  Ashton Rome (5th) fired home his own rebound from a tough angle past goaltender Charles Williams at 9:47 to tie the score at 1-1.  Kellen Jones (4th) gave the Railers a 2-1 lead with a breakaway shorthanded goal at 12:31. Worcester to a 2-1 lead into the second intermission and held a 34-18 shot advantage.

Worcester would fire 14 more shots on goal in the third period as Kyle McKenzie (2nd) added an insurance marker at 7:42 with a slapper from the left circle and Matty Gaudreau (4th) potted an empty netter at 19:11 to close out the game 4-1.  Eamon McAdam made 11 more saves for his 4th win of the season.

On Wednesday, the Railers begin a four-game road trip in Wheeling, WV vs. the Wheeling Nailers (ECHL affiliate of the Pittsburgh Penguins).

The Railers Tavern, located behind the DCU Center is now open and will provide hockey fans with a great pregame and postgame atmosphere all season long. Watch all road games broadcast live at Railers Tavern or watch on ECHLTV.com for a small fee. Listen to all Railers games live on 98.9 Nash ICON with coverage beginning 30 minutes before puck drop with Eric Lindquist and Tom Matthews. Full season memberships, mini plans, and group tickets are on sale now by calling the Railers front office at 508-365-1750 or by visiting www.RailersHC.com.