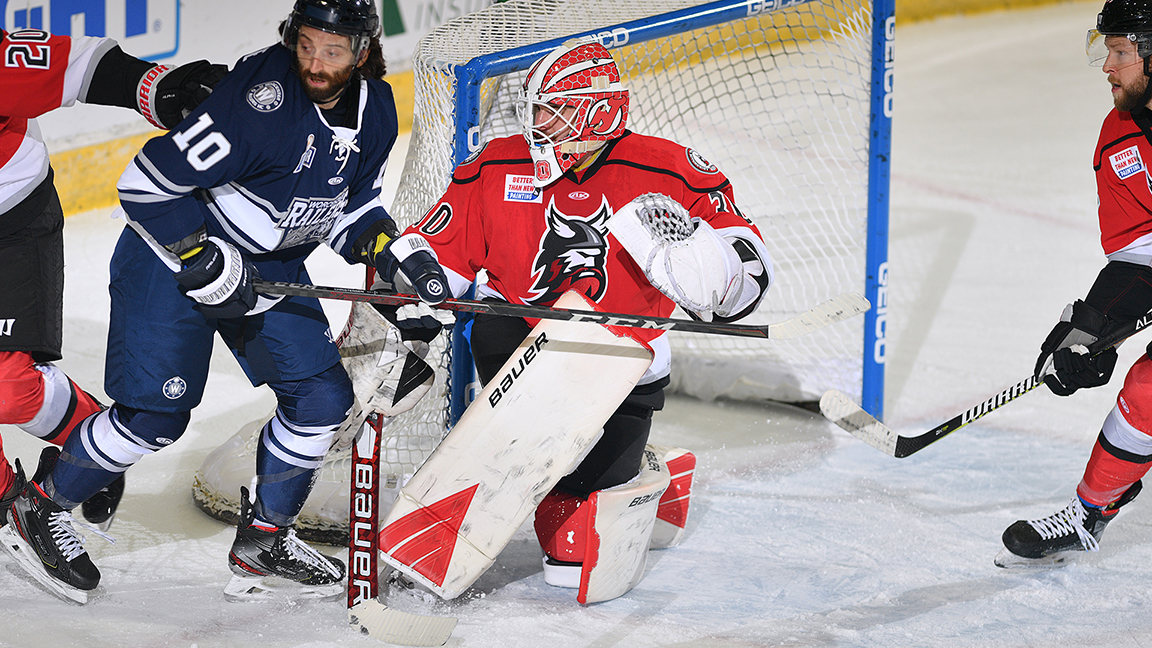 Meeting 1 of 14 vs. Adirondack this season

Thunder Explode on the Powerplay as the Railers Fall 6-2

Glens Falls, NY – The Worcester Railers HC (1-2-0-0, 2pts) dropped their first trip of the season at the Cool Insuring Arena, losing 5-2 to the Adirondack Thunder (1-1-0-0, 2pts) on Wednesday night. The Railers are back at the DCU Center against the Florida Everblades on Saturday, November 6th at 7:05 p.m. for Worcester IceCats Night.

The Railers went to the box six separate times on Wednesday night, paving the way for Adirondack to score three powerplay goals. Four Thunder had multi-point efforts, as Colin Long (1-1-2), Alexandre Carrier (2-0-2), Blake Thompson (0-2-2) and Joe Masonius (1-1-2) each found the scoresheet multiple times. Jordan Lavallee-Smotherman and Brent Beaudoin each scored goals while Colten Ellis made 29 saves in the loss for Worcester.

Just 2:16 into the first period, Jordan Lavallee-Smotherman (1st) put home the rebound of a Karl Boudrias point blast on the powerplay to give the Railers the early 1-0 lead. Adirondack would tie the game nine minutes later, as Colin Long (1st) put away the puck out in front at 11:13 into the period. Just two and a half minutes later, Alexandre Carrier (1st) crashed the net to tap in the second goal of the period for the Thunder at 13:42 into the period. Then, on their first powerplay of the night, Patrick Grasso (1st) would extend the Thunder lead on a tip-in in front of the net to beat Colten Ellis, and make it a 3-1 game with 3:52 to go in the frame. The Railers trailed 3-1 going into the first intermission, while shots were even through the first period at 11-11.

The Railers scored first in the second period as Brent Beaudoin (1st) lifted home a rebound off of a Mike Cornell shot to make it a 3-2 game with 6:16 to go in the period. Just 75 seconds later, Adirondack got one back as a Joe Masonius (2nd) slapshot from the point put the Thunder up 4-2 with 5:01 to go in the second. Worcester trailed 4-2 after the first two periods of play.

The Thunder struck first in the third, as Tyler Irvine (1st) deflected a puck thrown toward the net from the left wing to make it 5-2 Adirondack 4:13 into the period. Alexandre Carrier (2nd) would cap off the scoring for the night with an empty-net goal at 18:44 into the third period. Worcester would end up falling 6-2 to the Thunder.

Notes: Three Stars: 3rd: Star: Mareks Mitens (25 saves, 2 GA, .926 SV%) 2nd Star: Colin Long (1-1-2, 4 shots) 1st Star: Joe Masonius (1-1-2) … final shots were 35-27 in favor of Adirondack … Mareks Mitens made 25 saves on 27 shots for Adirondack…. Colten Ellis made 29 saves on 35 shots for Worcester while Justin Kapelmaster served as the backup…. Worcester went 1 for 2 on the power play while Adirondack went 3 for 6… Liam Coughlin (IR), Collin Adams (INJ), Charlie Spetz (IR), Paul Thompson (SUSP), Tyler Poulsen (Reserve), John Furgele (Scratched), Ross Olsson (IR), Anthony Repaci (INJ) did not dress for Worcester … Jordan Lavalle-Smotherman scored his first goal as a Railer in his third game for Worcester …. Karl Boudrias extended his point streak to two games with an assist … Blake Christensen led all Worcester skaters with five shots on net … Mike Cornell recorded a game-high 14 penalty minutes and received a game misconduct for fighting (continuing altercation) … Nolan Vesey has now played in 50 ECHL games … Nic Pierog has now played his 50th game as a Railer … Worcester has 69 games left on the regular season thirty-five of which are at the DCU Center. The Railers are now 21-13-2-0 all-time vs. the Thunder and 13-7-1 on the road.