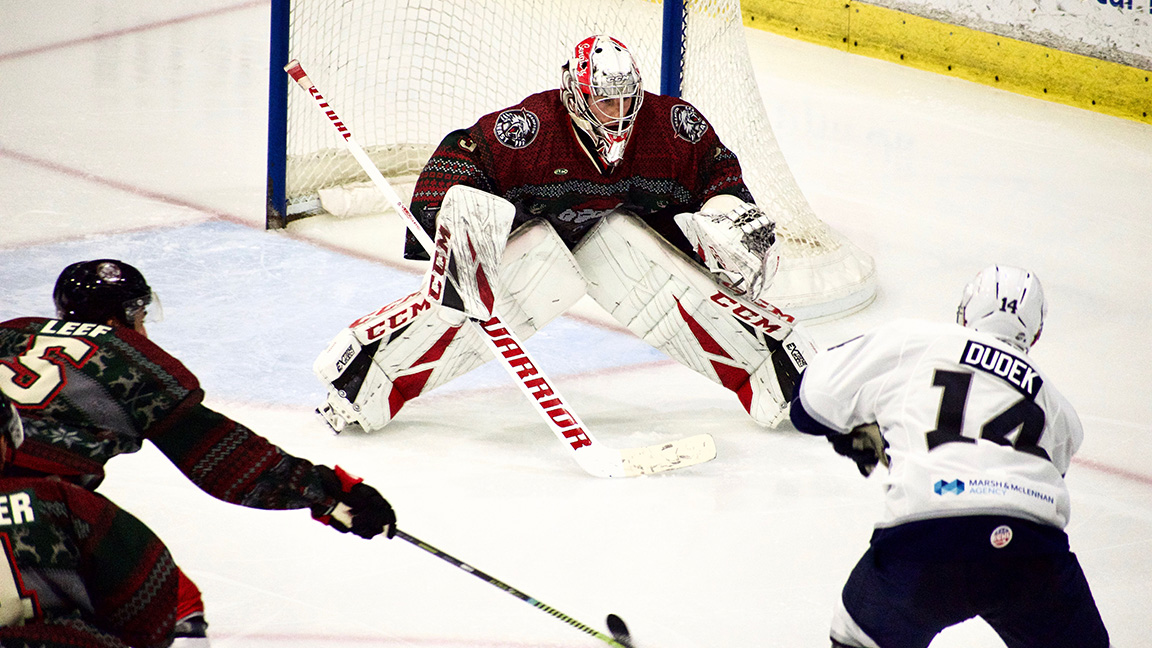 Meeting 6 of 8 vs. Brampton this season

Ian Milosz made 31 saves in net in his first ever professional game on the road. Brampton got goals from David Vallorani and Jackson Leef while Alex Dubeau made 33 saves for his third shutout of the season, his second vs. Worcester, and his ninth win of the year.

It did not take Brampton long to get on the scoreboard as David Vallorani (14th) was able to sneak one past Ian Milosz from behind the goal line just 46 seconds into the first period. It took Worcester about seven minutes in to register their first shot on net as things started to even out with Brampton holding the edge in shots 13-8 through 20 minutes of play and a 1-0 lead.

The Railers put on a strong showing in the second period which featured no score but Worcester outshooting Brampton 15-7 in the frame to capture the shot lead 23-20 through 40 minutes of play. Worcester still trailed 1-0 heading into the dressing room.

After a spectacular save from Alex Dubeau on Nic Pierog Brampton was able to counter the other way on a three on two rush led by Jackson Leef (6th) who wristed one along from the right circle by the glove of Ian Milosz at 11:16 to give Brampton a 2-0 lead which proved to be the final result.

Notes: Three Stars: 3rd star…. Jackson Leef (1-0-1) 2nd star: David Vallorani  (1-0-1) 1st star: Alex Dubeau (33 saves, Win) ….final shots were 33-33 …. Alex Dubeau (9-5-0) made 33 saves in net for Brampton.… Ian Milosz (1-1-0) made 31 saves on 33 shots for Worcester while Evan Buitenhuis served as the backup…. Worcester went 0-for-2 on the power play while Brampton went 0-for-4…. Cody Payne, Ross Olsson Anthony Florentino, and Tanner Pond (inj) did not dress for Worcester…. Mike Cornell, David Quenneville, Jakub Skarek, and Linus Soderstrom are currently on recall with the Bridgeport Sound Tigers…. Ivan Chukarov returned to the lineup after not dressing the last five games…. JD Dudek returned to the lineup after missing the last two games…. Nic Pierog led Worcester with five shots on net…. Ryan MacKinnon skated in his 100thpro game his 92ndwith Worcester…. It was the third time this season Worcester had been shutout the first since November 2nd….. Worcester is now 8-10-1-2 all-time vs. the Beast and 3-6-0-2 at the CAA Centre.

On Saturday, the Railers and Beast battle 4pm start on at the CAA Centre. Coverage begins 30 minutes before puck drop on 98.9 Nash Icon.  After a four-day holiday break, the Railers head to Adirondack on Dec 27 for a 7pm start time vs. the Thunder.